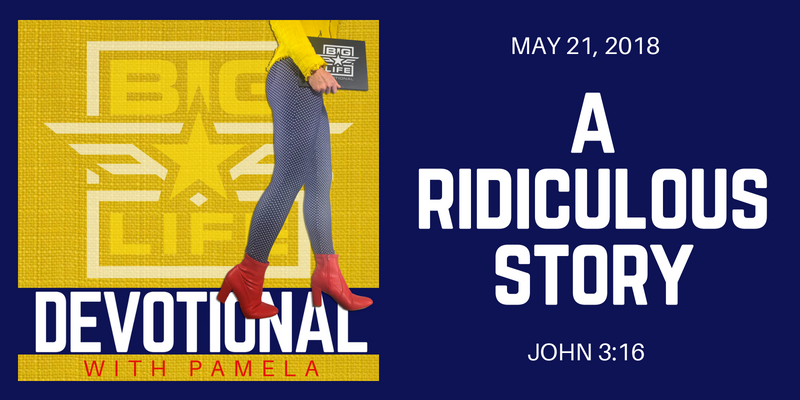 There are no limits on what God will do for you. Any limits on your life are your own doing, not his. I’m here to remind you this morning that God wants to give you a ridiculous story. Have you been coming to him with your requests to seize the ridiculous story and wildly unreasonable life available to you?

Today is a special day in my world. Coach Lonnie and I celebrate our 24th wedding anniversary today. We have a ridiculous story. One of those “against all odds” stories. Maybe you’ve heard our story, well here it is again.

I grew up in a tiny little country town in Missouri. When you live in a town with the population of 2,000 people, by about the 7th grade every boy in your school is either your cousin, or you already dated him … or worse … he’s both – he’s your cousin and you already dated him. So, each summer before school would begin, I would gather a few girlfriends at my house, we would stand in a circle holding hands and pray the following prayer – “Dear Lord, please bring new boys to our school. Amen.”

At the young age of 15 God clearly heard my prayers and uprooted an entire family from Dallas, TX and planted them smack dab in the middle of Douglas County. Our population jumped from 2,000 to 2,004 and rumor had it one of the new residents of Ava, Missouri was a 17 year old male. Can you say heart flutters and radars set on high sensory. We didn’t even know his name – we referred to him as new boy. There were more girls than just myself on the quest for new boy’s attention, but I walked away the proud winner of his affection and I promised I would one day marry that boy.

That one day came 6 days after my high school graduation. Yes, somehow my parents let me get married immediately after graduating HIGH SCHOOL. And new boy was forever mine. We married, went on a 1 week honeymoon, then very unlike all the fairytales he flew away to Germany to finish his tour in the Army there for 1 more year. After that 1 year apart we were finally able to be together. A few short months into the dream life of living on love and ramen noodles, surprise surprise, trouble hits. A blood clot was lodged in my brain stem, causing a major stroke. I lost my ability to walk or talk and my newlywed husband was prepared for his bride to never be the same. He never left my side. He never broke down and cried. He was just there. A strong and steady rock. He fed me, he bathed me, and he even shaved my legs.

And God healed me.

We have since ran marathons together, adopted children together, and made life one big old adventure together.

And it all started with a ridiculous prayer. A prayer for God to bring new boys to my school.

I believe our God is the God of the ridiculous.

The bible is filled with ridiculous stories. Stories of floods and rainbows, stories of wine made out of water, dead men raised, the blind made to see, a man in a whale’s stomach, a talking donkey, and people walking on water. And you know what I think … I think God wants to give you your own ridiculous story.

Won’t you be willing to pray ridiculous prayers out of ridiculous faith? Won’t you invite God to move mountains for you? God loves to show up and do the impossible. He loves to do things that only he could do so we all stand in awe and give him praise and honor.

The greatest, most ridiculous story of all is that the maker of the universe would give his one and old son for you and I. John 3:16 “For God so loved the world that he gave his one and only Son, that whoever believes in him shall not perish but have eternal life.” He sent him to Earth for us, knowing he would sacrifice his life. He died because he didn’t want to live without us. That’s ridiculous. I don’t understand that kind of love. I may love you and I may be willing to sacrifice for you, but I’m sorry there’s no one I would be willing to give one of my 3 children for you. Sorry bout ya … that’s not happening. But it happened for us. The most ridiculous love story included YOU.

The PDC translation (that’s the Pamela Dee Crim translation) says Jesus came so that you could have a ridiculous life!

A story of mountains only God could move. A story of the impossible happening right before your eyes. A story of miraculous proportions. Get out of the boat and step out on the water where God has a ridiculous story and big life waiting for you.

Then just make sure when you tell the story, give him the glory. It’s all because of him. I’m an ordinary girl, living a ridiculously good life because my mighty God heard the prayers of a 15 year old girl asking for new boys to move to school. And so it began. And it continues in the most ridiculous, unlikely ways because that’s how our God works.

By Lonnie|May 21st, 2018|Categories: Devotionals, Podcast|Comments Off on 081 A Ridiculous Story