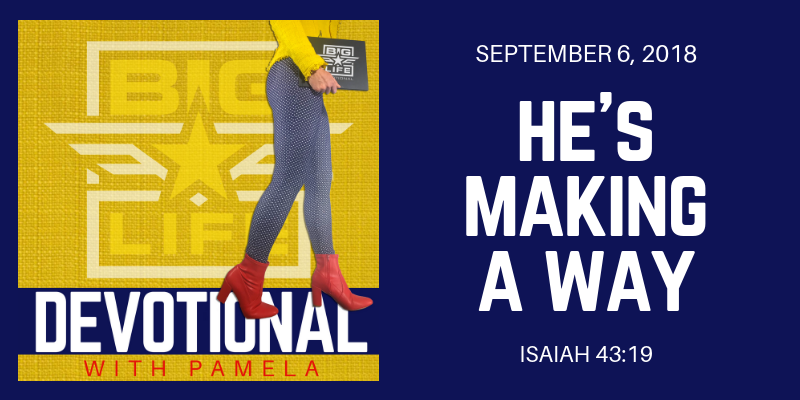 Isaiah 43:19 – See, I am doing a new thing! Now it springs up; do you not perceive it? I am making a way in the wilderness and streams in the wasteland.

God is speaking directly to you today and he is saying “I am making a way.” There may be no way right now. It may currently be impossible. BUT HE IS MAKING A WAY. You can’t see what God has been working on for you. You have no idea what he has been doing, but you’re about to. You’re about to see. “See, I am doing a new thing!”

The way for you is being prepared and that way is IN the wilderness. We want God to instantly remove us from our struggle, but instead he meets us in the struggle and makes a way right in the middle of it. Isaiah 41:13 says “For I am the Lord your God who takes hold of your right hand and says to you, Do not fear; I will help you.” Right now reach out your right hand. Hold it out. God, here I am, help me. Grab me and lead me as you make a way in this wilderness.

Our scripture today says he not only makes a way in the wilderness, but he brings streams in the wasteland. A wasteland is an area where nothing can grow. A dried up, wasted, useless area. Is there an area of your life that feels like a wasteland? It’s just useless. You’ve stopped hoping things would change because after all these years it’s only gotten worse. It’s been a waste of time and you’re not sure how much more time you’re willing to waste. So, you’ve stopped caring. You’ve stopped trying.

And what is God saying to you today? He’s bringing streams in the wasteland. Streams of water are about to flow through your dried up dreams and they will come to life again. Will you believe that he can do this for you? Will you believe that he WANTS to do this for you? God’s desire is not for you to be miserable. No, no, no. That’s the enemy’s plan. The enemy’s plan for you is misery because when you’re miserable your power is rendered ineffective and your potential goes untapped. God’s desire is for you to grow and flourish. Jesus says “I came that you may have life and have it to the full!”

God gave his son for you so that you would not only live, but so that you would live BIG!!! Your dried up dreams are about to receive a torrential downpour. Get ready for it! Streams will be flowing through your wasteland. The impossible can happen for you. Right in the middle of your wilderness, there will be a way. Where there has never been a way before, where nothing has ever worked for you in the past, exactly where you thought ‘this is just the way it will always be’, this is where God is making a way. This is where he is working for you.

Why would God do this for you? Have you ever read a promise of God and dismissed yourself from being the recipient of it? It must be for someone else. Someone who came from more. Someone who’s better than you. Someone who has their crap together more than you. I mean why would the almighty make a way for you? Why would he bother himself with your wilderness and your wasteland? Well first because you are his daughter. He loves you wildly. Nothing can separate you from his love. And here’s the second reason. Isaiah 41: 20 – “so that people may see and know, may consider and understand, that the hand of the Lord has done this.”

This is all so much bigger than you. God wants to use your life to show others his power. Will you let him? He wants to breathe life into your dried up dreams so that others may see and know that God has the power to do the same for them. You’re here and you’re hearing this today because he has chosen you. He has chosen your wilderness and your wasteland to work in now and he will use it for others to see.

God is doing something new now. It’s happening. Be willing to let go of the old. Just because it’s always been a certain way doesn’t mean it’s always going to be that way now. Dare to believe that things can change. Maybe you need to believe that people can change. Maybe that’s where God is doing something new. He’s changing someone in your life. A life that was being wasted is now being saved and changed. Living water will now flow. Will you believe that God can do that? I’ve seen people radically change. I’ve witnessed a life touched by the creator and 20 year battles be fought and won. I believe that can happen again today.

He is making a way.

By Lonnie|September 6th, 2018|Categories: Devotionals, Podcast|Comments Off on 159 He is Making a Way