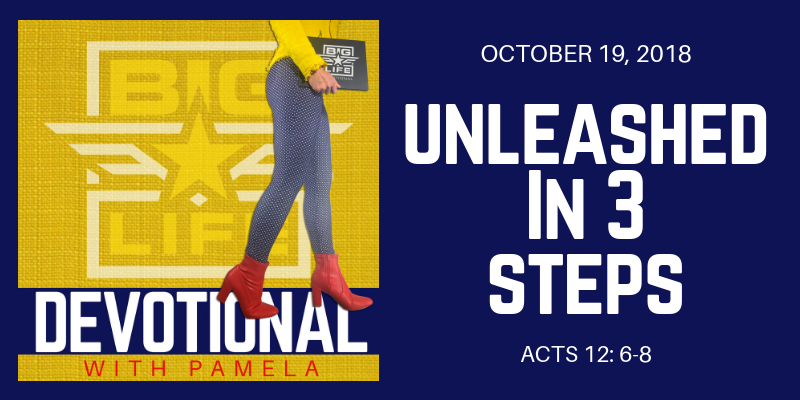 God is taking you somewhere. The enemy is trying to hold you back from going. God has a great plan for your life. The enemy has the opposite plan for your life. You’re either actively seeking God’s plan, or you’re passively settling for the enemy’s. This morning we will look at a story in the bible of a man being unleashed and set free and we’ll apply 3 lessons from this story to the chains which bind us today.

Peter was the apostle who walked on water with Jesus. He’s my favorite because I think I’m most like Peter. He wanted more out of life, he wanted to experience it all, however he was always getting himself in trouble by talking before thinking. Anyone else relate to Peter? In Acts chapter 12 we read about Peter being in jail.

In verse 6-8 it says “The night before Peter was to be placed on trial, he was asleep, fastened with two chains between two soldiers. Others stood guard at the prison gate. Suddenly, there was a bright light in the cell, and an angel of the Lord stood before Peter. The angel struck him on the side to awaken him and said, ‘Quick! Get up!’ And the chains fell off his wrists. Then the angel told him, ‘Get dressed and put on your sandals.’ And he did. ‘Now put on your coat and follow me,’ the angel ordered.”

And there they are, 3 steps for you and I to follow today to break free of that which holds us back: Get up, get dressed, go.

First, Peter is told, “quick, get up!” and the chains fell off his wrists. Notice Peter was told to get up while the chains were still binding him. Ahhhh, he had to get up first. He had to put some effort in. He had a responsibility in his freedom. Quick get up, then the chains fell off. How often we lay around and wallow in our mess saying, “God, please help me – pick me up – set me free” but we aren’t willing to first get up. What if the chains holding you back will only be broken after YOU get up. Get up when you don’t feel like it. Get up when it’s not fair. Get up when you fear you’ll be knocked right back down again. Get up. Chains don’t fall off when you’re just laying there. You have a responsibility in this freedom you seek. It’s not just going to magically happen for you as you do nothing. Will you be willing to get up BEFORE you feel better? Before you feel there is a change? Before you know for sure you can stay up?

Then the angel told him “get dressed and put on your sandals” and he did. Now that you’re up, get dressed. Why is this so important? Because getting dressed signifies you’re going somewhere. You’re no longer staying where you have been stuck. BELIEVE that God is taking you somewhere, so prepare yourself. This scripture shows us exactly how to do it. God says get up, get dressed and Peter just does it. Don’t question it. Don’t delay. Don’t make long lists and rewrite your lists. Don’t alphabetize your excuses. Just do it. Quickly. Now. When it doesn’t make sense.

When I first started in business years ago, my mentor told me “Pamela, you’ve got to fake it till you make it.” I would get up every morning and dress for a million dollar meeting all though there wasn’t a single person coming to my office to see me that day. My phone wasn’t ringing for me to make a sale, but I was rip roaring ready to answer that phone like a pro. Sometimes we’ve gotta dress the part to prove we’re ready for it. If you don’t want to be a frumpy mom today, then don’t dress like a frumpy mom today. If you want energy today, girl get outta your pajama pants. If you want to be healthy and fit, slap on a pair of spandex pants and dare to do what people who wear spandex pants do. Those people move! God’s not into looks, but he is into your participation in this process. Show him you’re ready! Show him you take responsibility for your role. Get dressed for it.

You want out of the chains? You want to live unleashed? You want to finally break free? Quickly, get up, get dressed and then step 3, “follow me”. God is saying “let’s go.” If you will be willing to get up and get dressed, God is going to take you somewhere. He will help you live a life of freedom. Those chains that have held you back in the past will be broken, but you have a responsibility in this too. Let’s go. Let’s get moving. You don’t know where you’re going … hey you don’t have to know the way, you’re just following God. God will be so faithful to guide you, and you know how he does it … one step at a time. He always makes the next step right in front of you. Just follow him. His holy spirit lives within you and it prompts you. Start listening to his voice and those promptings from within.

Here’s the thing I’ve discovered about that voice and those promptings … I don’t typically hear him when I’m sitting around doing nothing. The promptings are halted when I’m wearing my “giving up on life” pants. You know, we’ve talked about those pants before. The ones that make you so comfortable you just want to lounge around all day. Girl, put you some pants on with a zipper. Put you something on that says “I’m doing something today”, even if you don’t know what that something is. When you’ve gotten up and when you’ve gotten dressed, then God will start showing you where to go and what to do.

We’ve had it all backwards. We lay around and mope saying, “If God would just tell me what to do, I would do it, but I never hear from him.” Oh maybe we don’t hear from him because we’ve forgotten the first 2 steps. Get up and get dressed. Prepare yourself. This is an act of faith that God is taking you somewhere and you don’t want to miss it! If it’s been a while since you felt God’s promptings and guidance, then ask yourself if you’ve been prepared. Have you been showing God that you’re ready? Have you been up and ready to go? Have you been dressing the part for the life which you seek?

Get up, get dressed, let’s go. Unleashed. This is the life for you. Break the chains. God is about to blow your mind with the life available to you, won’t you take it?

By Lonnie|October 19th, 2018|Categories: Devotionals, Podcast|Comments Off on 190 Unleashed in 3 Steps