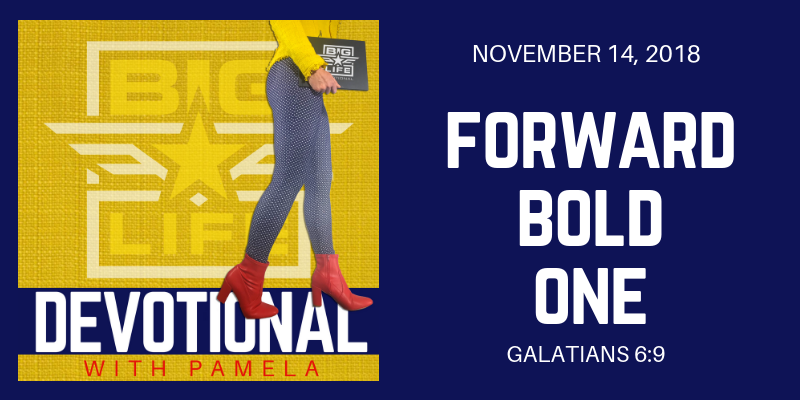 God is calling you forward. He’s calling you boldly onward to your destiny. A pursuit of your purpose is ahead, will you go forward? They say fortune favors the bold, therefore those who sit and stew, those who get stuck in their own head, those who delay and defer are often passed over and left behind. How very unfortunate. How unfortunate to miss the favor that has been planned for you.

Did you know God has favor not only available for you, but planned for you? Psalm 5:12 says “you bless the righteous; you surround them with your favor as with a shield.” Before you dismiss yourself from his favor because you believe you will never be righteous, understand the meaning here. The Message translation describes the righteous as a “God seeker”. Isn’t that you? Isn’t that what you’re here doing? You’re seeking God. You’re seeking his will. You’re seeking his way. As a God seeker, you are surrounded by favor.

Knowing this favor is planned for you, won’t you be bold today in moving forward? Will you take the next step on your journey?

For some listening, you’ve already felt the stirring of God’s calling in your life. You’ve already been given a whisper of his plans. A seed has been growing within you and you’ve seen a glimpse of what God is preparing you for. And perhaps it scares you. You have a long list of why you can’t and why it won’t work, and yet you still feel a pull towards a destiny that seems out of reach. Here is your word today: FORWARD BOLD ONE!

Dare to give life and breath to this dream. Dare to tell others about it. Will you be so bold as to present this idea, this plan, this vision you have been given that still seems quite ridiculous? Will you be so bold to speak into that which God has been stirring within you? Will you go forward?

That’s what God wants of you today … forward motion. It takes no courage to stay where you already are, you know what that looks like. Yes it may be comfortable, but it’s sucking the life out of you! FORWARD BOLD ONE.

Not everyone is so bold. Many have sold out to the easy way. Many have settled into the rut of the ordinary. And they have allowed the favor which had their name on it to pass by them. BUT NOT YOU. No, no, no, not you. You are no longer satisfied with the rut of the ordinary. You are no longer seeking easy. You’re a God seeker. You desire the destiny you were created for. You’re hungry for the life available to you. You are ready to move forward. You are grabbing for the favor destined for you. Stand up and get it sister. Chase after what you missed before when you were hunkering down and playing little.

Now, warning to my fellow forward moving, bold God seekers … this journey will not be easy. But the good news is we already said we were no longer seeking easy, right? This journey will not be straight nor quick. You will endure many storms on this journey. Storms which beat you down and weather you. You’ll come out soaking wet and stronger. You will endure the hot flames of the fire on this journey. Fire which feels absolutely miserable in the moment, unbearable heat that pushes you back. You’ll come out smelling smoky and refined. This process is often painful, but the wheat must be separated from the chaff. Layers peeled back to reveal the treasure within.

For others listening, if you’re being honest, you’re straight up confused what God is trying to do in your life. There have been no whispered plans. You feel no seed growing within, no glimpses of preparation from God. I’ve been there. That still, quiet season of life where you feel God has gone silent. Maybe he’s given up on you? Maybe it’s too late for you? Maybe he found someone else better for the job he had planned for you? No! Let me tell you what is happening here … you’re being prepared for radical growth.

Often times our journey looks like the growth of a Chinese bamboo. The Chinese bamboo is planted in the soil and if perfectly cared for, absolutely NOTHING happens for a full year. No growth. No change. Nothing. However, if continued care is given, after 2 years, there will be … nothing. Still nothing. And the third and the fourth year is the same. However, on the fifth year of care, that which had zero signs of life or growth before, will shoot up and grow 80 feet in just 6 weeks! That’s a growth of nearly 2 feet per day! Remarkable.

We see people who seem to have that kind of wild and immediate success in their life. God’s favor is so evident. Everything they touch is blessed. Every idea is a success. However, I’m left to wonder if maybe we’re just witness of their year 5! What were their first 4 years like? Were they discouraged with the nothingness they saw and felt? Were they ready to give up?

Some say, “oh Pamela it’s so easy for you to preach boldness and favor, you’ve been successful.” Oh girl, this is my year 9! My Chinese bamboo was greatly delayed. I would have been delighted with that growth after 5 years. You’re catching me on the 9 baby, you missed the years of big ideas that met a hard fall. You missed the years of stagnant stalemate. You’re just witnessing my growth spurt that’s been a ridiculously long time in the making. BUT I’M DANG SURE I DIDN’T GIVE UP. I’m grateful I was surrounded by people who wouldn’t let me give up. I’m grateful I have a God who just wouldn’t leave me alone with his annoying whispers which continually told me I was created for something more.

Perhaps you feel nothing right now. You have no real direction or exciting mission from God. Keep showing up my sister. Keep watering and caring for your soil. This is your bold act of faith. You have no idea what is about to happen! Where there has been no progress, there will be an abrupt breakthrough and you will see physical evidence of what God has been preparing you for all this time.

Galatians 6:9 says “let us not grow weary of doing good, for in due season we will reap, if we do not give up.”

Don’t you dare give up my friend. God is doing something in you. Now maybe you know exactly what God is doing because you’ve felt the stirring. You’re all stirred up! God’s been fanning your flame and you’re now on fire. FORWARD BOLD ONE! Don’t you give up. This isn’t going to be easy. But God seekers are the recipients of his favor, and his favor makes a way when there is no way, and makes things work when nothing else has ever worked.

But for those who are in that stagnant season where God seems to be quiet and the orders for your mission seem to be delayed, you’re being called forward as well bold one. If you will refuse to give up during this season, you’re going to make it to the next season, and that’s a season where you will SEE what God has been doing. FORWARD BOLD ONE. Keep seeking God. Keep seeking the life he has available to you, and settle for nothing less.

By Lonnie|November 14th, 2018|Categories: Devotionals, Podcast|Comments Off on 208 Forward Bold One