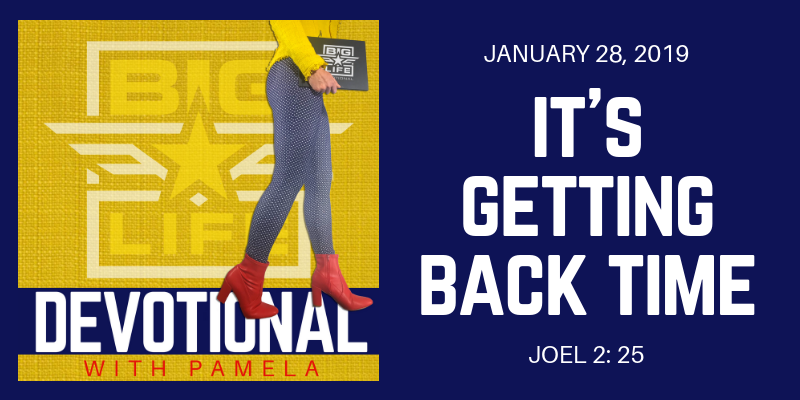 Locusts are insects much like a grasshopper which bring great destruction. They show up in masses and consume all that is living. In this scripture God is speaking to his people who had just endured years of hardship. Years of loss. Years of destruction. Now he is saying, I’m here to give back to you what you lost.

Four kinds of locusts are mentioned. The swarming locusts, the hopping locusts, the stripping locusts and the cutting locusts. I wondered, what has swarmed and overwhelmed you? What has hopped in and walked all over you? What has stripped you of your confidence and your peace? What has cut you deep and left you wounded? This is your locust. Whatever loss it has caused will now be repaid. Whatever hard times you have endured, good times will be multiplied. If you will remain faithful, if you will continue to trust in God, he will right every wrong in your life. He will bring it full circle. You may not know how and you will not know when, but he will work on your behalf and make it so.

Do you believe that?

What have you lost? How many years have you spent hurting or stressing over that which has happened to you? I assure you, it has not slipped by God without his notice. He has not been amiss in your pain. He has not been absent in your suffering. He knows it all. He has seen it all. He has heard you. And through it all he has had a plan to restore you. A plan to rebuild you. A plan to take all that isn’t right, and make it right. More than right.

Will you let God do that in your life? That’s a genuine question, because often after a season of destruction, we lose our trust. We become jaded and cynical. We’re just waiting for the next thing to fall apart, the next thing to go wrong, the next delivery of bad news. Expecting it. Accepting it. Believing that life is against us and God has forsaken us.

But a new season is here. A season of the tables turning and wrongs being made right. A season of restoring that which was lost. A season of repayment. Oh yes, repayment! But understand, you’re not the one getting anyone back. God’s not calling you to get back at those who hurt you. It’s not ‘get even’ time. It’s restoration time. For restoration to fully take place we have to stop replaying the story in our head of how bad it was. How wrong they were. How innocent you were. Will you release that story for an opportunity to live a new story? A story of wholeness? A story of purpose? Will you let God do the repaying and you do the releasing?

You must quit tearing down that which God is now ready to restore. You are being restored.

Various translations of this scripture say “I will repay you, I will restore you, I will give you back, I will make up to you what you have lost, what has been devoured, that which has consumed you.” Oh there it is … that which has consumed you. Have you ever been consumed with something? Something that has taken your peace, filled your thoughts, plagued your happiness, and seeped it’s way into every corner of your heart and mind? I certainly have been. I’ve been consumed. I’ve been hurt to the point of believing it would never be okay again. And I was wrong. God has been true to his promise. That which seemed would always hurt has been restored.

Don’t you know that’s the power of our loving God? That’s the work of our infinite creator. He can do the impossible. Will you open up your life to receive this kind of restoration? This kind of healing? Will you let him make up to you what you have lost? Will you turn over that which has been consuming you and let God consume you instead?

When scripture tells me God will take even that which was intended to harm me and use it for good, I believe it! I have to believe it. It’s the only thing that makes sense when bad things are happening. It is what continually brings me back to a place of faith in the fire. He will use it for good. He will restore. He will repay. He will make it right.

Someone listening today has been under attack for years. Years of hardship. Years of never being able to do the right thing or fix it. Years of hurting and yearning for something, anything to change. All while God has seen it. And what makes it even worse is to understand that sometimes God has not only allowed it, but in some cases even brought it. Finish reading our scripture today and it says “It was I who sent this great destroying army against you.” The locusts which had consumed and destroyed were sent by God. Directed by the hand of God.

To think some of the most painful times in my life weren’t always as a result of the attack of the enemy. They were sent by God. By a God who loves me wildly and will stop at nothing to guide me back to the person he created me to be. Sometimes I am freaking stubborn and I get tripped up, and the truth is the only way God was able to get my attention was to destroy the things around me which I had built. The things which I had treasured. The things that had become so important to me. And once those things were gone, THEN THERE WAS GOD. Once everything was stripped away, I could see what had been there all along … a God calling me back to my true self. Not the one with all the fancy things. Not the one too busy to make time for him. Not the one standing on the mountaintop alone with a long list of successes. No, the one humbled in the valley who truly understood her absolute dependency and need for Him.

And then God began restoring. Then he repaid all that was lost. Then he made up that which was destroyed. And this girl has been changed forever.

And you are being changed forever in the process as well. Don’t lose faith in this process. God knows exactly what he is doing. He can be trusted. He is fighting FOR you, not against you. Receive your restoration. Receive your repayment. Now is a time of rebuilding because you have chosen to remain faithful. God can restore what is broken and change it into something amazing.

By Lonnie|January 28th, 2019|Categories: Devotionals, Podcast|Comments Off on 261 It’s Getting Back Time