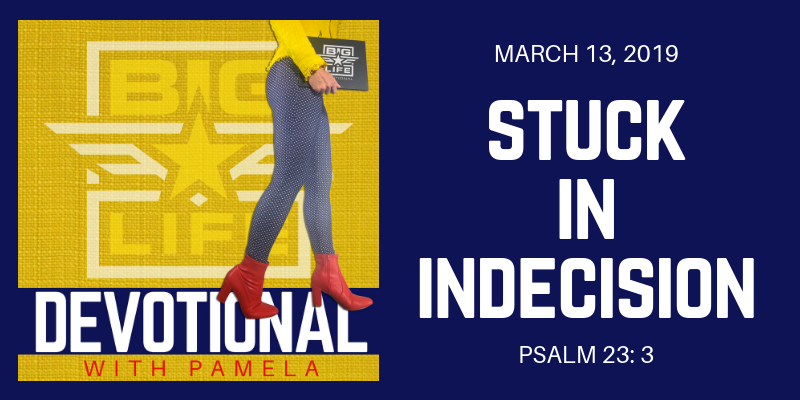 Do you have a choice to make, but you don’t know what the right choice is? Have you been delayed, waiting for the clear answer, afraid to get it wrong? When you make a choice, you stand a chance of being wrong, and who likes being wrong? I’ve never met a single person who enjoys being wrong. Because of our fear of being wrong, we’re often stuck in indecision. We typically DO know what we want in life, we really do, but actually going for what we want is scary because it could go wrong. Who am I talking to today? Who’s sitting in indecision today, hiding behind a pile of choices because it’s safe to stay there?

The truth is, this is an area of great frustration and confusion for many. MAKING A CHOICE is hard to do. And because you fear making the wrong choice, you avoid choosing and thus you stay STUCK. Is it better to be stuck than to be wrong?

God isn’t always clear with his direction. I’ve mistaken my fleshy desires for his divine guidance and it’s taken me down the wrong path. How about you? I’ve cleaned up plenty of messes following wrong choices. But wow did I learn a lot in the process. Looking back, I ask if it would have been better to do nothing? Would it have been better to sit and wonder for a few more years? How many opportunities would I have missed as I waited for that clear sign?

My daughters would have surely spent several more years in the orphanage as I waited to know FOR SURE we were supposed to adopt them. This podcast would still be a thought, because ya’ll I so wasn’t certain God was really directing this. I bet the same is true for you. You would probably still be waiting to have that first baby, unsure if you were really ready to raise a tiny human being, huh? That career move was risky, but it worked out didn’t it?

I believe God has called us to be bold women willing to make choices and risk being WRONG.

Question – can God handle our wrong choices? Oh you bet your sweet little butt he can. He is constantly at work to work all things together for good … even our bad moves and wrong turns. I mean if he can put 60,000 miles of blood vessels in your body and create a totally unique, one of a kind set of fingerprints for you, don’t you think he can realign opportunities you may have missed and adjust for your missteps?

Psalms 23:3 tells me “He guides me along the right paths for his name’s sake.”

He guides ME. And he guides you. Are you calling on God for his guidance? Are you seeking his will? GREAT. Then don’t be so darn afraid to make a choice. If you are genuinely seeking him and your heart’s desire is his will above your own, then trust that he will hold true to his word and he will guide you along the right path.

And should you wander off on the wrong path and hang a left when you should have made a right, your God can make a NEW PATH for you. Sometimes we’re just on the scenic route to our destination and God can deal with that. Who is pretty sure you’re currently on the scenic route to your purpose in life because it’s taking longer than you ever imagined? Ahhhhh, me too. Seems I may have taken a few wrong turns along the way and God is just encouraging me to enjoy the backroads as he leads me somewhere beautiful. You too?

I often pray for doors of opportunity to be opened, but even more often I pray for doors to be closed if they’re the wrong doors. I ask for God to lock ‘em up, dead bolt them, seal ‘em tight if I’m not supposed to go through them because I know this much after 43 years of life … if it’s not what God wants for my life, I really don’t want it either. That’s a powerful prayer. God, if it’s not what you want, I DON’T WANT IT EITHER.

That all sounds good, doesn’t it. I bet you can agree with me so far. But what does that really look like in real life? What do locked doors look like? It looks like everything falling apart right in front of your eyes. It looks like a continual stream of NO’s and ‘sorry you’re too late’. It looks like, your position will no longer be available, the pregnancy failed, the contract fell through, she said no, it didn’t work out, you knew you shouldn’t have gotten your hopes up. And wow do we ever get frustrated and lose hope quickly. Take a step back and realize maybe this isn’t bad luck … maybe you’re not being punished … maybe, just maybe what’s really happening is God’s promised guidance along the right path, locking doors to keep you out of the wrong ones.

I can look back over the past years of my life and see clearly all the closed doors I prayed for. My Facebook memories have a way of reminding me of all the big ideas I had that fell flat and the hopeful situations that never quite panned out. And you know what that was? Upon first glance it looks like disappointment. It looks like setback. But the truth is, that was God guiding my family.

But it kinda sucks when you’re going through it.

And it sucks so bad most of us just decide to never make a move or dare to change. We won’t try the new flavor because what if it’s wrong and what if it’s a major disappointment. We won’t make a choice and say what we really want because what if it doesn’t work out? GOD WANTS YOU TO SEEK HIM FIRST, THEN TRUST HIM ENOUGH TO GET OUT THERE AND GO FOR IT. And keep trusting him when the doors slam in your face.

And remember this, he is powerful and loving enough to right your wrongs when you mess up along the way. He can turn all things to good – even your mistakes. Sometimes learning what you don’t like and what you don’t want is crazy valuable. God can use that.

Don’t be stuck in indecision and an endless series of ‘what if’s’ – get out there and live. God is guiding you!

By Lonnie|March 13th, 2019|Categories: Devotionals, Podcast|Comments Off on 293 Stuck In Indecision