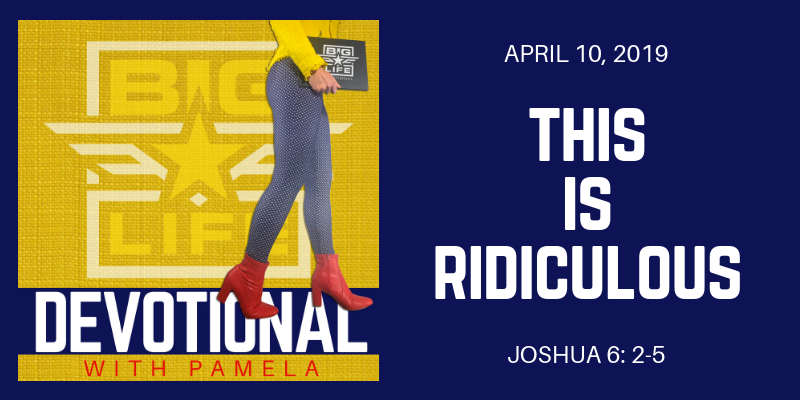 Are you currently facing something in your life that seems ridiculous? Ridiculously hard. Ridiculously impossible. Your solution will likely seem ridiculous as well. Perhaps what God is asking you to do will make NO SENSE. Will you be obedient and do it even when you don’t understand?

Joshua Chapter 6 tells us the story of the Battle of Jericho. (verse 2-5)

“But the Lord said to Joshua, “I have given you Jericho … You and your fighting men should march around the town once a day for six days. Seven priests will walk ahead of the Ark, each carrying a ram’s horn. On the seventh day you are to march around the town seven times, with the priests blowing the horns. When you hear the priests give one long blast on the rams’ horns, have all the people shout as loud as they can. Then the walls of the town will collapse, and the people can charge straight into the town.”

Let’s get this clear … THIS MAKES ABSOLUTELY NO SENSE.

Joshua led an army of men. Can you imagine how foolish he looked gathering up his troops and saying, alrighty boys, here’s our battle plan. We’re going to take this city of Jericho that’s all walled up and impossible to get into by a brilliant plan. Listen up everybody, we’re going to march around the wall. And then, then we’re going to blow some horns and we’re going to yell like real loud with our big manly voices, and then … then those walls are gong to fall down and we’re going to walk right in.

The city of Jericho was a total of about 6 acres. It was completely protected by a a stone wall 11 feet high and 14 feet wide. At its top was a smooth stone slope, angling upward at 35 degrees for 35 feet, where it joined massive stone walls that towered even higher. It was virtually impossible to penetrate. No one was breaking through those walls. No one was climbing over those walls.

But Joshua had faith strong enough to look like a fool and believe that God would do the impossible if he didn’t give up.

What is your Jericho? What is it that you desperately want in life that seems to be walled up and absolutely untouchable? What are you about to give up on because it now seems ridiculous?

Who am I talking to today? Who has been trying everything they know to do? Who’s frustrated over the process? Who’s looking at a huge stone wall in front of them, blocking them from moving forward?

Gather around, God has a message for you today. REMEMBER WHERE YOU’RE GOING. The very thing which you want. The thing you have prayed for. The thing you’re working so hard for … it’s just on the other side and all you have to do is keep the faith and keep marching.

You are right on the edge. It may only take one more push. One more step. You’re being positioned.

Don’t you dare give up now.

The process you go through to win your Jericho battle will seem ridiculous. Others will NOT understand your circling. But do not lose faith. Keep marching. March through the ridiculous.

Sometimes it doesn’t make sense so that you are forced to get out of your own head and get in your spirit. GET OUT OF YOUR HEAD, GET INTO YOUR SPIRIT. (It’s much like the Billy Ocean song ‘get outta my dreams, get into my car’ … but different.) God has something for you. He woke you up this morning and said KEEP MARCHING.

And our response needs to be, “God, we will be the women crazy enough to stick with it. We will keep marching until the walls come down.”

Now there’s one more important element of this story I want to point out. Joshua instructed his soldiers to march in silence in preparation for the 7th circle on the 7th day when they would shout. Why silence? BECAUSE THERE COULD BE NO COMPLAINING.

When one person starts complaining and whining “this doesn’t make sense. We marched yesterday. I don’t want to march again today. Nothing is happening. This is ridiculous. The walls aren’t moving.” That complaining acts as a poison to the whole army, frustration grows and everyone loses hope.

Have you been poisoning your family, your friends, your co-workers with the poison of complaining and whining as you march. Insist that stops today.

By Lonnie|April 10th, 2019|Categories: Devotionals, Podcast|Comments Off on 313 This Is Ridiculous