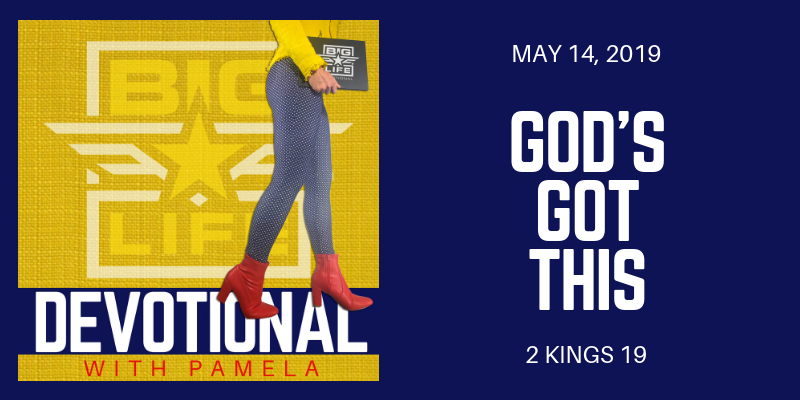 God has heard your prayer.

He has a plan.

He knows what you’ve been through. He knows where you’re at. He knows what lies ahead. He sees it all. Every detail is within his vision. Nothing is hidden from him, not even the things you refuse to speak of. He knows your deepest fears. He knows all about the things you wrestle with that remain unspoken. He is here with you now and he is already ahead of you making a way.

Not a single prayer you have ever prayed has gone unheard. Ever. God is listening and he is moved by your need. His power is allocated by your request. His plan is set into motion by your surrender.

You may have been praying and feel God is not answering. Things may only appear to be getting worse. You may be questioning if God has heard you. Has he been moved by your prayers? Is he going to do anything about this?

Yes, God has heard your prayer. He has a plan.

The Bible is filled with stories of God responding to prayer and making a way when there seemed to be no way. God’s plan unfolding in the middle of the impossible. Today we’ll take a look at a less familiar story in the book of 2 Kings. The story of a King who prayed.

King Hezekiah was under attack. He had every right to be filled with fear. He was outnumbered and surrounded. Everyone had counted him out.

Have you been counted out? Maybe you’ve even counted yourself out. You feel too far gone. It’s too late. The mountain is too big and you’re tired of climbing. The storm is only growing stronger as you grow weaker. Have you prayed about that? Are you still seeking God in this storm? Are you still counting on him to show up and do something … or have you given up?

Seriously, have you grown disheartened by the continual attack and resigned to a place of defeat? Have you lost hope? Pray again. God has heard your prayer. He has a plan.

In Kings chapter 19 King Hezekiah had become so disheartened by the attacks of his enemies that he tore his clothes and put on burlap. Tearing your clothes was customary when you were grieving. It was a sign of deep anguish. Burlap was the scratchiest, most uncomfortable of cloth. To put on burlap meant you were miserable. This is the state King Hezekiah was in. Grieving and miserable. And yet he prayed. He prayed to a God who had the power to do the impossible on his behalf. He prayed to a God who he dared to believe still had a plan in this disaster.

The Lord responded to King Hezekiah’s prayer and said to him, “Do not be disturbed by (what your attacker says). Listen! I myself will move against him.”

God says I’VE GOT THIS. Don’t pay attention to what they say. Don’t let this shake your faith. Keep your eye on me. Listen to me. I MYSELF will move against your enemy. You can’t do this, but I can. I have a plan.

Now notice what happens after God says he has a plan. Immediately after this, King Hezekiah received a message from his attacker, the King of Assyria. “Don’t let your God, in whom you trust, deceive you with promises that Jerusalem will not be captured by us. You know perfectly well what we have done wherever we have gone. We have completely destroyed everyone who stood in our way! Why should you be any different?”

God has his eye on you. He has moved in close. He has a plan and he is on the move.

In 2 Kings 19: 14-19 we read “After Hezekiah received the letter from the messengers and read it, he went up to the Lord’s Temple and spread it out before the Lord. And Hezekiah prayed this prayer before the Lord: “O Lord … You alone are God of all the kingdoms of the earth. You alone created the heavens and the earth. Bend down, O Lord, and listen! Open your eyes, O Lord, and see! Rescue us from his power; then all the kingdoms of the earth will know that you alone, O Lord, are God.”

Notice what he didn’t do. He didn’t freak out. He didn’t call a town meeting to talk about how horrible it was. He didn’t reread the letter from his attacker over and over again. Oh aren’t we guilty of that? We keep the words that cut us like a knife so we can read them again. We save the text, we relive the conversation, we replay the hurt, and each time it cuts us deeper. Fear grows. Overwhelm sets in, and we dig our own hole deeper.

STOP THAT. God doesn’t want you reliving the attack again. Stop reading the text. Stop talking about the hurt. Stop letting fear consume you. What did King hezekiah do when he received this bad news letter from his attacker? He went up to the Lord’s Temple and spread it out before the Lord.

Take your bad news and spread it out before the Lord. Take your hopeless situation and kneel down before him. Take your impossible to the almighty. Spread it out before him. Acknowledge his power and his plan. Ask God to listen to you, to see you and to rescue you. He will. He will move in ways you could never imagine. He will show up with the armies of Heaven and fight for you.

And here’s what God did for King Hezekiah. Scripture says that night God sent his angel Army to the attackers and killed 185,000 of them. The next morning the remaining attackers woke up and saw what had happened and in fear ran the other way. Hezekiah hadn’t even picked up his sword … all he had done was spread his problem before the Lord and prayed a prayer of faith. GOD RESCUE US.

Do not be disturbed by your circumstances. Yes, you’re under attack. We all are. This is life in a fallen world with a ruthless enemy on an ego trip. But he’s a defeated enemy on his way out! He will try to remind you of your past defeat. He will try to convince you things are hopeless and you are powerless. He will try … but he will NOT BE SUCCESSFUL. In the name of Jesus he will NOT be successful with his attacks. His lies will not penetrate your heart. You will hold to your truth and your God will rescue you.

By Lonnie|May 14th, 2019|Categories: Devotionals, Podcast|Comments Off on 337 God’s Got This