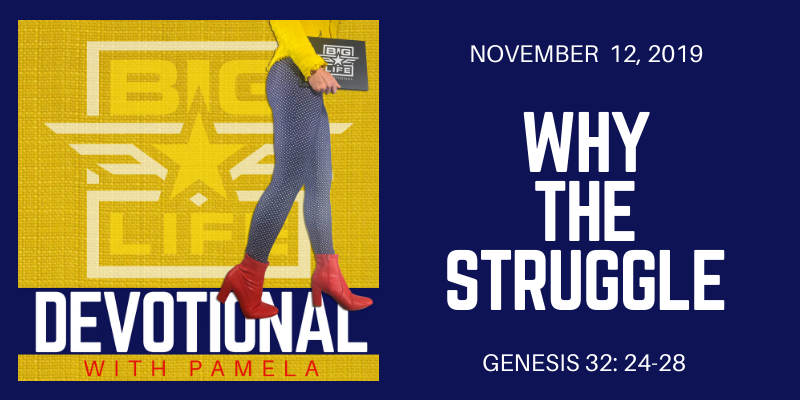 In today’s devotional I’m taking you to Sunday School. We’re going to study a bible story, snack on a tiny cup of goldfish crackers and then we’re going to make a little craft out of cotton balls and popsicle sticks to take home. Okay, no we’re not. We’re just going to study a scripture, you’re responsible for your own snack and craft time, you’re a grown woman now. Ya’ll know I used to teach Sunday School and I sucked at really teaching but whew we played some fun games and had awesome snacks. So, I’m just here hosting this podcast to make up for all the little kids that are now in college who I failed to teach the first time around.

Scripture tells us a story of twin brothers. Jacob and Esau. They were at war with each other even in the womb. Stop right there and imagine being that pregnant mama. Your babies are fighting before they’re even born. I have a friend who says her first child could be described in one word from the time he was a baby, DEFIANT. Do you have one of those defiant children? Just difficult? That was this poor mama, pregnant with twins and one is so defiant they are in a full on fist fight in her womb.

Esau was born first, and as the first born son, he would receive the birthright. Birthright was both position and inheritance. Because he was born first, he would automatically be ruler over his younger brother, as was the custom then. Esau was a manly man out hunting and killing stuff, while Jacob was a mama’s boy always hanging around the house.

One day Esau comes back from a hunting trip and he’s literally dying of starvation. Jacob had been cooking in the kitchen with his mama making some delicious stew. In walks his starving brother begging for some stew and Jacob says “I’ll make you a deal, I’ll give you a bowl of my delicious stew for your birthright.” Now that ain’t right! That’s his brother for heaven’s sake. And we thought our kids were mean to each other!

So Esau in his delirious state of hunger says fine, I promise you my birthright and I turn over my power for your stew. So it’s no surprise a few chapters later in Genesis we see Esau coming after Jacob with an army of 400 men to kill him. Hang with me, I’m going somewhere with this and I promise it will apply to exactly where you are today! If nothing else this is going to help the mama who has two children quarreling this morning to see it could always be worse. They could be hunting down each other with an army.

Jacob is on the run with his family and he stops for the night to set up camp and sleep. Now remember, Jacob is the one who was defiant from birth. The one who tricked his brother and took what wasn’t his. There at the camp, Jacob has an encounter that changes his life forever. Let’s read about it in Genesis 32: 24-28

“So Jacob was left alone, and a man wrestled with him till daybreak. When the man saw that he could not overpower him, he touched the socket of Jacob’s hip so that his hip was wrenched as he wrestled with the man. Then the man said, “Let me go, for it is daybreak.”
But Jacob replied, “I will not let you go unless you bless me.”
The man asked him, “What is your name?”
“Jacob,” he answered.
Then the man said, “Your name will no longer be Jacob, but Israel, because you have struggled with God and with humans and have overcome.”

Understand what just happened here, Jacob was scared for his life, just trying to get some rest and seeking comfort through prayer (because remember his angry brother who is much more manly than he is, is now hunting him down to kill him) and dang if someone doesn’t show up and wrestle with him all night long. And this man injures him, dislocating his hip. That’s the last thing Jacob needs is to be running for his life with a crippling limp, and his angry wild hunter man brother closing in. But this was God who showed up and wrestled Jacob that night. It was God who dislocated his hip.

When all Jacob wanted was rest and comfort, he received a struggle.

Do you ever feel that way? When what you really need is a break? When you’re desperate for a breakthrough and instead what you get is another serving of chaos to go on your already heaping pile? You ask God to show up and he shows up with more struggle! Why wouldn’t God show up and strengthen Jacob instead of crippling Jacob? Why? For the same reason God often allows you to struggle.

The struggle changed him. Jacob was living as a lesser than version of who he was created to be. He had settled for a life of deceit when he was intended for a life of obedience. God had good plans for his life, but he could never step into those plans as the man he had become. God knew Jacob’s past. He knew of his lies and trickery. He knew of every wrong he had ever done, and he still choose to bless him. He still chose to work through him. And it would come through a struggle.

Jacob received a new name that night giving him a new identity. Jacob means deceiver. That’s who he had been his whole life. Everything he had was a result of being tricky and deceiving, but God had bigger plans for him. And the way to that plan would only come through a struggle. After wrestling with God all night, Jacob received a new name, Israel, meaning wrestler with God.

Your past struggle has changed you. Your current struggle will change you. That’s why it has been permitted. You will no longer be who you used to be. God is bringing you closer to who he had in mind when he created you. While it feels like you are being beat down, you’re being set up for your blessing. You’re being built up to become who you were always supposed to be.

Jacob now has a new identity as Israel and he has received God’s blessing. And while he now has a limp from his injury, he also has the confidence going into battle with the army coming for him that God is with him. Could your limp be your blessing? Could God be reminding you that what you survived is proof he is on your side? Could your struggle be a source of confidence for you now? How are you going to know God is a healer if your family was never touched by sickness. How will you know God is a provider if you never hit rock bottom? How would you ever have the opportunity to know peace that passes all understanding, without first not understanding why the heck these things are happening to you? How would you be able to personally know God as your redeemer if you weren’t first bankrupt? And I don’t just mean money. I mean bankrupt on hope. Bankrupt on options. Bankrupt on energy. This is prime time for your redeemer to get to redeeming!

God’s not afraid of giving you a little limp if it will increase your faith. He’s not afraid of letting your good plans fall apart so he can lead you to his better plan. He will allow life to touch you so it changes you. Nothing is wasted when you’re seeking God’s will and blessing. NOTHING.

What is it you’ve been desperately wanting and relentlessly seeking? What have you spent sleepless nights praying over? You’re wrestling with God. Understand that’s a good thing. Don’t give up. When God makes us wrestle him for some blessing, it is not because God is hesitant to bless us, but that’s sure how it feels. It is because he has more blessings for us in the wrestling than without it. We can learn more in the delay. We can grow more in the difficulty. We can trust more in the darkness. And isn’t that God’s ultimate blessing? Growing and becoming more like he created us to be so we can step into the good life he has planned for us from the beginning?

Receive your blessing through the struggle. Walk away crippled if you have to, but remember God is for you not against you. His great plan for your life is better than anything you could ever dream up.

By Lonnie|November 12th, 2019|Categories: Devotionals, Podcast|Comments Off on 466 Why the Struggle?