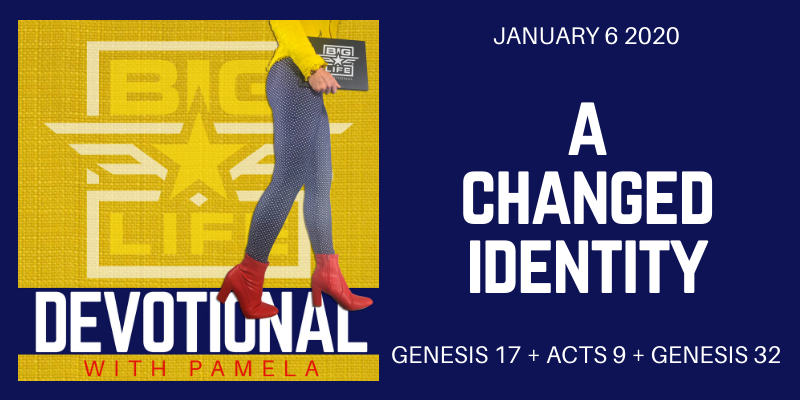 And through it all, he will change you. That’s what God does, he works through seemingly ordinary events and struggles common to everyone, and he uses it all to change you. Change how you see yourself. Yes, change your identity.

Many of us are struggling our way through life because we have a case of mistaken identity. We’ve taken on the role of a character we were never intended to be. We’ve assumed the position of a wanderer not knowing the way, when we have a destiny deep within us. We’ve put on the clothes of a stressed worried soul, when through Christ we are clothed in righteousness and commanded not to fear. Mistaken identity.

Do you know who you are?
Do you understand the power dwelling within you?

In scripture we see several people who had taken on an identity of less than favorable circumstances, then God comes in and rocks their world. And it starts with a name change.

Sarai was a broken, barren old woman whose entire world was defined by her inability to have children. It had consumed her for decades. Her value and worth was wrapped up in this one thing. She was broken. Then God shows up.

But you see, God had always been there. He had always had a plan. He had made a way, but her entire life she couldn’t see the way. For years (I mean like 70 years) she waited for a baby until all hope was gone at the age of 90. And what happened?

But first there was a broken woman who God gave a new name, and a new identity.

6 days after my high school graduation I received a new name. I went from Pam Freeman, the daughter of Roy and Linda Freeman, to Pam Crim, the wife of Lonnie Crim. With my new name came a new role, and a new identity.

5 years later my name changed once again. With the birth of our son Logan, I became Mom. And at some point in the future another birth in our family will once again change my identity, and I will become a Grandma. (Side note, I’m totally on the bandwagon of choosing your own super cool Grandma name … I will be Granny P because you know my love of P words up in here!)

My favorite name changing game changer in the Bible is of course Paul. Paul, the great crusader for Christ who wrote the majority of the new testament we read today, was once Saul, the persecutor of all Christians looking for a head to cut off. But when Saul encounter God on the road to where he was going, his identity was radically changed. He was no longer who he used to be and he was no longer going where he was once going.

Honey, you are no longer who you used to be either. You can go in a new direction now!

The name Jacob means trickster. In the bible we read of a twin brother who was nothing but a trickster always stirring up trouble. Of course it was Jacob living up to his name. Then an encounter with God changed his name to Israel. This encounter caused his character to change and he was no longer driven by a selfish desire, God had taken over his life.

God, please come in and change any character trait within me that needs to change this year. Take over my life. Change me from my core and help my next step be in alignment with your plan. I recognize with this encounter, you will call me out of who I’ve been playing around in the shallows of life as, and call me into deep waters as who you always intended me to be. It won’t be easy and it might be scary, but I’m ready now.

When I turned 30 I decided I would no longer be Pam. I would step into my grown up name and become Pamela. Pam was the young, immature, flighty me. Pamela was the mature, professional, determined and driven me. It took months for me to change the habit of introducing myself as Pam or signing my name as Pam, but eventually it happened, I became Pamela. Now when family or old high school friends call me Pam I hardly even answer. That’s not who I am. I am Pamela.

Much the same, you can change how you see yourself and it will take time and effort.

You no longer have to be the professional worrier. You understand worry is the meditation of crap, right? Why would you choose to meditate on crap? STOP THAT! That’s not who you were created to be. Take on a new identity. The family worrier stresses everyone out and helps no one. No one wants to pull up a seat next to the designated worrier of the family. If you feel like they’re avoiding you, they are!

You may have been presenting yourself to the world as the stressed overwhelmed woman with too much on her plate, but God created a grounded, centered, focused and intentional woman within you. Let her run the show today! And when she starts running the show, that’s how you begin seeing yourself.

With a little practice living as who you were created to be, instead of some lesser-than version you’ve assumed over the years, your value, your worth, and your identity will align with God’s original design. Then when someone reminds you of who you used to be, it will literally feel awkward. Why would you call me Pam, I’m Pamela. I changed who I am.

An encounter with my Creator.

I was once walking around with a mistaken identity, now I’m walking around knowing who I was created to be, and everyday I’m living a little more like her!

By Lonnie|January 6th, 2020|Categories: Devotionals, Podcast|Comments Off on 504 A Changed Identity