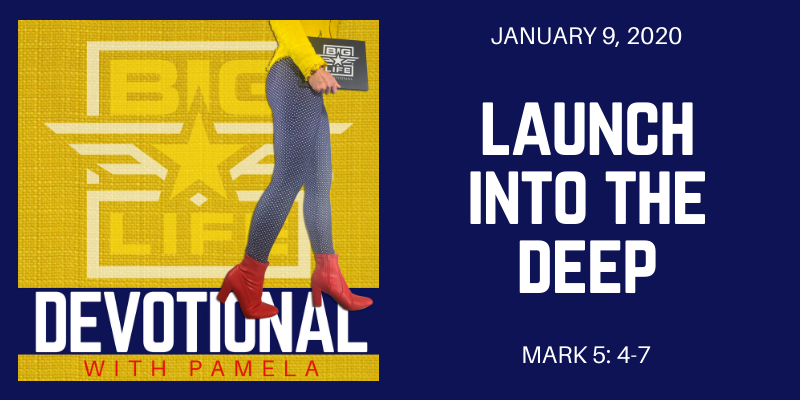 If you were to launch this year, what would that mean for you? If you were to go all-in, holding nothing back, really have your take off, and break free from the shallows of living, what would life look like for you?

This is a question posed to our group of 12 women at our BIG Life Goal Setting Retreat last night. Imagining our launch. Not only imagining our launch, but daring to believe we are truly ready for what God has available to us, then boldly going there.

Within scripture is a story of Jesus calling a fisherman to launch. Simon was a professional fisherman and he had a really bad day at work. You ever just have one of those bad days where nothing goes right and the things that should work don’t? Yeah, that was how it had been for Simon. Simon pulls his boat up on the shore and is washing his nets which means he’s done. He’s packing it up and going home. He had tried all he knew to try and was catching nothing.

Someone listening right now has tried all they know to try. You’ve done the things which worked in the past, and it’s not working now. You’re discouraged. You’re frustrated, and you’re ready to pull this boat up on the shore and call it quits. Then comes Jesus. Today, right here right now, to get in your boat. And when Jesus gets in your boat, some things start changing!

Jesus gets into Simon’s boat and says hey, let’s go back out. Now remember, Simon was frustrated after a long unsuccessful day fishing. This wasn’t fishing for leisure, this was fishing for livelihood. If Simon didn’t catch fish, Simon didn’t get paid. All his time, all his efforts for nothing.

And what does Jesus say? Let’s get back in the boat.

So Simon takes Jesus out where he had been fishing all night long with no success. And Jesus says in Luke 5:4 “Launch out into the deep and let down your nets for a catch.”

Launch out into the deep.

And what happens next?

Simon says “Come on dude, I’ve already tried this. It didn’t work. There’s no fish here man. But okay, whatever you say.”

That’s the reality of it. Jesus, what you’re saying doesn’t make sense. I feel like I’ve already tried this. I’ve been here before and it didn’t work for me.

This is the place where you start questioning if there’s something wrong with you. Why won’t this work for you? Why can’t you be successful? Why can you just not seem to make anything work? And sometimes this is where we get stuck.

God tells you to go back out and try again, but you’re not willing to try again because of past experiences that tell you it won’t work. But honey you’re dealing with God … you think he isn’t Lord over your situation? You think he can’t make a radical change here? Stop selling him short and stop counting yourself out.

Oh what if Simon would have stayed stuck in his frustration? He would have missed what happened next.

Verse 5 says ‘Simon answered, “Master, we’ve worked hard all night and haven’t caught a dang thing (emphasis mine, but you know Simon was feeling it). But because you say so, I will let down the nets.”

But because you say so, I will.

And it’s like que the music, here comes Hillsong with:

And because Simon did what Jesus had told him to do, even when it didn’t make sense, he caught the biggest catch of his life. Scripture says in verses 6 & 7 after Simon launched into the deep and let his nets down, “they caught such a large number of fish that their nets began to break. So they signaled their partners in the other boat to come and help them, and they came and filled both boats so full that they began to sink.”

My sister, you can’t even contain what God wants to give you. You have no idea the abundance he has in store for you. I know you can’t imagine that right now. I know your past disappointment tells you to be cautious and hold back, but no more holding back for you. No more playing little. No more tip toeing around. All-in you go, launching into the deep and letting your nets down. Oh yes, your nets which represent your guard and your defenses. Let those down now.

Out here in the deep with a fully launched life, God’s going to do what you can’t even imagine right now. Just like the nets couldn’t hold the fish, your mind can’t fathom your catch right now. It’s out there. It’s available. The question is, are you available?

Are you available to God? Is your boat available because Jesus wants to get in. But he doesn’t want to sit on the safe shore with you talking about all that went wrong. He wants to take you back out to try again, but this time go deeper.

And the beautiful thing is, when God blesses you out here in the deep, your blessings flow over onto others. That’s why he would choose you, because you can use what God has done in your life to impact someone else. Simon’s boat was so full, he called over his fishing buddy and filled his boat with fish too. Both boats were so full they began to sink.

Okay, no more arguing with God and reliving all that hasn’t worked for you in the past. No more pity party. No more wallowing.

When God says let’s go out here in the deep and let down the nets, SAY YES.

It doesn’t have to make sense. You don’t have to understand it. You just have to trust God has a plan, it’s a good plan, and launch into his plan.

Master, because you say so, I will.

By Lonnie|January 9th, 2020|Categories: Devotionals, Podcast|Comments Off on 507 Launch Into the Deep