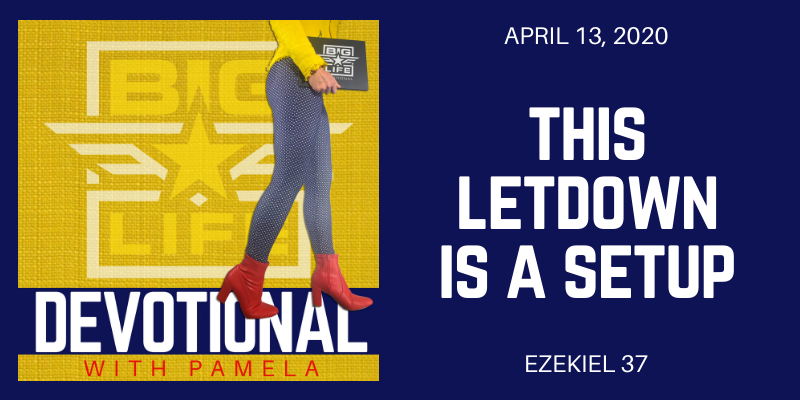 Sometimes I feel let down. Do you ever feel that way? You get your hopes built up for something and reality is a harsh disappointment.

For many, that kinda sums up Spring 2020. Here we are finally in this new season where the bitter cold has passed and the time for road trips, camping trips, and weekend adventures is here … yet, we’re stuck inside. We’re stuck at home. We’re separated from those we want to see and grounded to our own rooms like a sneaky teenager that got caught.

Maybe that’s what this is … all that stuff you got away with in your younger years … now it’s catching up to you and girl you’re grounded!

This just isn’t what we were expecting. Remember when you created your vision board for 2020 … uhhh huhh, yeah, none of this was on it!

Your letdown can be your setup.

We’re just in the middle. That’s right, we’re in the middle. In between the letdown and the reveal of greater. This is temporary. Psalm 30:5 says “Weeping may endure for the night, but joy comes in the morning.” This is the night, morning is on the way.

We just remembered a letdown that became a setup. The letdown of Friday. The day Jesus was crucified and placed in a tomb. We’re quick to jump to Sunday because we know what Sunday brings, but imagine not knowing. Imagine being there and not having the gift of knowing the story.

It’s Saturday and the tragic events of yesterday are real. Friday happened and the whole world fell dark. Hope was lost. Imagine how Saturday must have felt. Jesus was dead and he was buried and the world was supposed to move on. People got up that day and fed their families. They changed their clothes and they showed up for life. They did what they had to do, and they did what they could.

But they had no idea they were in the middle. In between the disappointment of defeat and the miracle of victory. It was just Saturday and they couldn’t see Sunday.

But through the middle, through the darkness, and through the reality of what had happened on Friday, eventually Sunday came. And Sunday changed everything.

It’s what we celebrated yesterday. Resurrection. The stone had been rolled away and Jesus was no longer in the tomb. He had risen.

And this is what God always had planned. The ultimate victory of Sunday … but first the bitter defeat of Friday and the silent ache of Saturday.

And isn’t that where we are … the silent ache of Saturday. The new normal has set in, and we’ve lost much. We’re grieving what was and what is no longer. And that’s okay. But honey, Sunday is on the way! You can’t see it right now, but through this pain and darkness greater things will come.

This letdown is a setup. God’s plans are unfolding, but we’re just in the middle. It may be Monday, but it’s more like a month and a half long Saturday where we find ourselves waiting for the Sunday that reveals how all of this has been used for good.

YOU DON’T KNOW WHAT GOD IS DOING HERE.

BUT YOU CAN TRUST IT WILL BE GOOD.

Yesterday morning I got up and I put on my flowery Easter dress I’ve worn for the past several years in a row and I rocked it in my kitchen. I watched Elevation Church on Facebook and Easter happened in my house for the first time ever. Think about it, how amazing the resurrection wasn’t cancelled this year, it just came home. It came to my home and it came to your home.

The service I watched was built around a new song Elevation Worship wrote in the past week called “Rattle.” It hasn’t been released yet, but you can find the lyric video on YouTube that was uploaded overnight. The song tells of the impossible God can do. The impossible God did, and the hope of the impossible he will do now. The RATTLE God can create.

Ezekiel 37 tells of a vision the Lord gave Ezekiel. The vision of a valley of dry bones. Signs of life that no longer existed. In this vision the Lord tells Ezekiel “Prophesy to these bones and say to them ‘Dry bones, hear the word of the Lord!” And when he did, the dry bones of what used to be began to rattle and come together. Life was breathed into these dry bones and stood up on their feet again.

Verse 12-14 says “My people, I am going to open your graves and bring you up from them; I will bring you back … Then you will know I am the Lord. I will put my Spirit in you and you will live. You will know I have done it, declares the Lord.”

This is a vision of what God was doing on Saturday, the day between the crucifixion of Friday and the resurrection of Sunday. He was putting things back to together. He was preparing for new life again. And he would prove HE DID IT!

And when Jesus walked out of the grave, he took us with him! We will not be held down in this. A way has been made. What we have lost here, God will restore.

Can’t you hear the rattle? Can’t you see what God is doing now? Don’t you know he can do it!

God says live! Don’t lay down and give up. Get up and live. If Jesus walked out of the grave, girl you better get to walking too!

Hasn’t he proven the impossible is possible for him? And my guess is, he’s not running out of miracles anytime soon. My guess is the very impossible you face today is totally possible when fully surrendered to the one who can make every dry bones rattle and come to life again.

What happened between Friday and Sunday was the unseen. While everyone was mourning the loss and grappling with the new reality, in the unseen God was doing the impossible.

God is doing the impossible now. This letdown is a setup. Don’t get stuck in the disappointment of how you thought things were going to be and all the hardships of our new normal. Don’t get stuck here because we’re not staying here. This is a setup for a miracle and you have to get up and be ready for it.

Could God could have stopped all of this from happening? Of course he could have. He could have saved Jesus from the cross too, but he didn’t. He saw what we didn’t see. He knew what we couldn’t know. Friday had to happen and Saturday had to be long, because what would be revealed on Sunday would change the world forever.

Why? Because we know what God can do on Sunday! We know God can, God does, and God WILL bring what was gone BACK TO LIFE and DO GREATER THINGS because of it all.

By Lonnie|April 13th, 2020|Categories: Devotionals, Podcast|Comments Off on 574 This Letdown Is a Setup