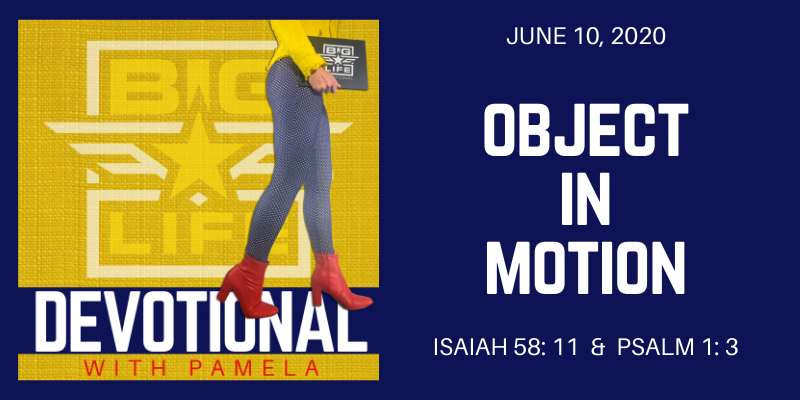 Two planted feet are hard to direct. We pray, “Lord, please direct me in the way I should go”, but the truth is we have our heels dug in, fearful of change, waiting for the 5 year plan to be revealed before we’re willing to move those feet. God’s not into pushing.

Maybe that’s what you’ve been expecting him to do. You’ve been waiting for a hard push to get you going. You know it’s funny, I’ve never read a single story in the Bible about God pushing someone to direct them. I’ve never seen evidence of God providing the big picture plan with the clear path to get there. So, why would we expect it? Why are you sitting here waiting on it?

Here’s what God does, he GUIDES.

There’s a big difference between guiding and pushing. Guiding is that gettle nudge that turns you while you’re on your way. Guiding is an act of alignment of something that is already in motion. God is waiting for you to GET IN MOTION here sister. If you’re not hearing from God, if you’re not feeling his direction, could it because because you’re standing still, doing nothing, waiting for a PUSH?

Well, you may be standing there stuck for a long time. Get yourself in motion and just watch what God can do. Seek him as you show up and do the best you can where you are with what you have, and you will feel the guidance you’ve been seeking. Not a crystal clear plan, not a guaranteed easy path or promised success … no, just a guiding hand that nudges you ever so slightly towards what is right.

Psalm 1:3 says “whatever they DO prospers.” The key word here is DO.

God simply will not prosper work you will not do. He doesn’t work that way.

Newton’s first law of motion teaches us an object at rest stays at rest and an object in motion stays in motion.

Well, you will likely keep sitting there. Waiting here. Wondering how. Questioning when. Complaining about it all. Worrying yourself sick. And stay stuck. It’s the law of motion.

Understand there’s a difference between a Holy Pause and just sitting there. A holy pause is a slow in your roll to check yourself. It’s looking up to ensure you’re going in the right direction. It’s a genuine seeking of God’s direction. But don’t fool yourself into believing that’s the same as sitting there in your mess waiting for God to come in and just fix it. He’s not going to fix this honey, he’s going to give you exactly what you need to fix it, but provision is received as you get up and get going.

If anything is going to change, YOU WILL NEED TO CHANGE IT.

You, yes you. It’s time to be the object in motion!

Get going somewhere before you know for sure where you’re going. Start doing something even when you’re unsure how exactly to do it. And AS YOU GO, GOD WILL GUIDE YOU.

He won’t push you into motion, the start is on you. As you go, as you do, as you work, you shall prosper.

In flight, if you adjust the direction of the airplane by a mere few inches, the destination is greatly affected. Sitting on the runway, going no where, shifting the direction of the nose will make no impact at all. It’s the ADJUSTMENT IN MOTION that determines landing in New York versus Florida.

Is there an area of your life where you stuck as an object at rest going nowhere? Don’t fool yourself into believing you’re waiting on God if all you’re really doing is waiting for things to be easier, clearer and more certain. God works in the unknown and I’ve yet to have him fully reveal a plan in the beginning. But here’s what has happened for me; he’s tapped me on the shoulder as I go. He’s turned my head ever so slightly to see something I was about to miss as I was passing by. He’s made slight adjustments to my direction as I continued in motion and the entire trajectory of my life changed.

NONE OF THAT HAPPENED WHILE I SAT AND DID NOTHING.

Notes in one of my journals several years ago read: Pamela, if you don’t build he he can’t bless it.

Funny, looking back I realize this was journaled while I was still hosting this devotional as a daily conference call with about 20 people on the line. I was already in motion. Then he gave me a little nudge to turn the devotionals into recordings shared publicly. Then another nudge to set up a little studio in our closet and step into the world of podcasting. I had no idea what I was doing, I was just DOING.

Are you waiting for the PUSH? The truth is God works more through a nudge. If you’re standing still nudges feel like hits. Like hurtful pokes that discourage you. He’s not poking at you my sweet girl, he’s trying to direct you. If you would get in motion that little nudge would serve as the guide you’ve been searching for. Like the airplane in motion that changes it’s direction by a few inches, you will be amazed by where God wants to guide you.

Build it so he can bless.

Work so he can prosper.

Set in motion so he can guide.

By Lonnie|June 10th, 2020|Categories: Devotionals, Podcast|Comments Off on 616 Object In Motion