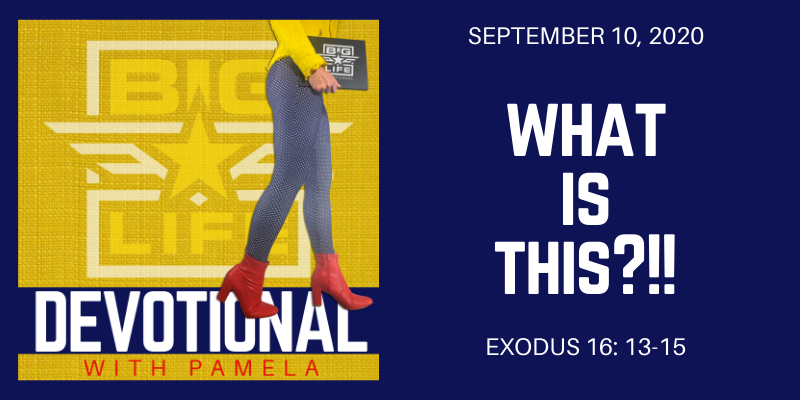 Have you ever asked God for one thing and you feel like you get something totally different? Have you started to question Jesus’ word where he says “ask and ye shall receive”? Yeah Lord, I’ve been asking but what I’ve been receiving has been disappointing in comparison to what I was expecting.

The Israelites were hungry in the desert and they asked God to supply their needs and give them food to eat. The next day they woke up to manna. We know manna as this miraculous bread directly from God which sustained the Israelites where there was nothing else to eat. But let me tell you, THIS WAS NOT WHAT THEY WERE EXPECTING.

Exodus 16: 13-15 “In the morning there was a layer of dew around the camp. When the dew was gone, thin flakes like frost on the ground appeared on the desert floor. When the Israelites saw it, they said to each other, “What is it?” For they did not know what it was. Moses said to them, “It is the bread the Lord has given you to eat.”

And this is why they called it manna. Manna to them meant “what is it?” It meant “now what do we do”?

Maybe you’ve been asking God for guidance and there hasn’t been a single flashing sign making the way clear yet. You’re just as confused as you ever were as doors continue to close and you wander along. But my sister, don’t miss the fact that closed doors are guidance. That no you received was in response to your request for guidance. Sure it’s disappointing, but you simply don’t know what God was protecting you from when he shut that down. Nor do you know the open door with something better than you ever imagined still awaiting you. The only way God guides you to it is to disappoint you by closing those other doors you were so willing to settle with.

Yes, this is what guidance looks like. It doesn’t feel miraculous, but it is. You just don’t recognize it for what it really is.

The Israelites didn’t recognize the white dew covering the ground for what it was either. It didn’t look miraculous. It didn’t look like loaves of bread, but they didn’t yet know what God had given them. There’s more coming here.

Oh, that’s where you woke up? You woke up in the training grounds for patience today? You may not like this, but God sure likes what he’s working developing in you here. He sure likes the lessons you will learn in this. He sure likes how much more you’re becoming like the girl he created you to be through this training.

So, he’s not going to get you out of it. He’s going to provide in miraculous and mysterious ways right in the middle of it … and you may not recognize it for what it really is.

Marriage doesn’t look the way you thought it would, does it? Surprise … he annoys the crap out of you! Surprise … opposites attract and he is your total opposite! That was fun and exciting in the beginning, now the sound of him breathing nearly drives you crazy.

And this man is the literal answer to my prayers, and I am his. Not what we expected, but exactly what we needed. We balance each other. I don’t need someone like me, I need someone like him. I’m all gas. He’s all brakes. Without him I crash and burn. Without me he never gets anywhere. Together, we go exactly where God has planned for us to go.

But, it’s recognizing it for what it is, because usually it looks a little (or a lot) different than we were expecting. This is how our mighty and powerful God works. He provides in mysterious ways and the majority of the time it’s mysterious because you don’t understand what the heck it is and what the heck you’re supposed to do with it.

In studying manna, this miraculous bread from Heaven that appeared on the dessert ground each morning, I’ve learned the most practical and applicable lessons for exactly where we find ourselves today.

It is believed that this manna was like a coriander seed covered in dew. Not loaves of bread, but a seed which could become something. Not a seed to be planted, but a seed to be ground. When worked, when crushed by hand, when grinded out, this substance found on the ground became much like wheat and could be used to make bread.

It wasn’t what they expected and they didn’t recognize it’s potential because IT HAD TO BE WORKED. They prayed for bread and they got something they could use to make bread.

There’s some grinding, some working, some changing that must be done here my sister. You have asked God for guidance and provision. He has heard you and he has answered, perhaps not in a way you even recognize. But it’s here. He now expects you to work with what he has given you and be amazed by what it becomes.

This man God gave me who is my complete opposite is the best partner I could have ever asked for. He’s also the single person I COULD butt heads with and disagree with on the daily, but that’s a choice I have to make. I choose to see the countless ways God gave me exactly what I most needed and work WITH it instead of AGAINST it.

You may not recognize what you’ve been given as exactly what you asked for … but maybe that’s because you need to work with it. Some grinding is required. This is a process and your participation is required.

What the heck is this … well, it’s everything you prayed for!

By Lonnie|September 10th, 2020|Categories: Devotionals, Podcast|Comments Off on 682 What Is This?!!