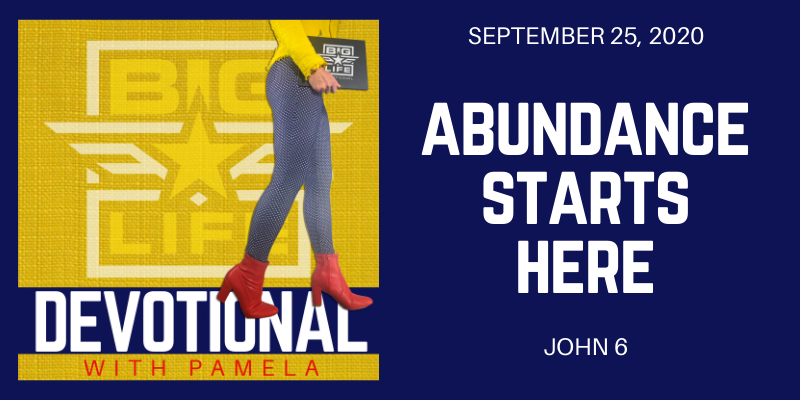 Today we reveal the secret of taking what is not enough and making it more than enough. Magnifying what you have to become all you need. Recognize God wants to help you take any area of lack in your life and create an abundance.

There’s a story in the bible you’ve likely read dozens of times, which holds the secret of creating an abundance where there is lack. Within this story are personalized instructions for you today. Answers for what to do with what you have which seems not enough, and magnifying to the point it is more than enough.

Our story is found in the book of John chapter 6. Jesus was (and is) awesome. And what do awesome people do? They do awesome things. That was Jesus, just walking around doing awesome things. As a result he had drawn a large crowd of people who wanted to see and hear him, a crowd of 5,000 men, plus women and children. These people had come from a long distance and now they were hungry.

His disciples were kinda stressed out about it. And although Jesus already had a plan, he asked them, “where are we going to get enough money to buy all these people some food?” There wasn’t a Chic-fil-A or Taco Bell on the corner, and even if there were, they didn’t have the money to buy food for this huge crowd. And here’s Jesus who had been raising the dead, healing the sick, giving the blind their sight again, and he’s saying “yo guys, we have a problem here, we don’t have enough food to feed these people.” The disciples were freaking out realizing it would take more than 6 months wages to buy enough food to feed everyone this one meal.

Yes Jesus let them sit in this reality for a moment. He let them see the lack.

And he’ll let you see your lack too.

God in all his power will allow you to come face to face with your “not enough”. He allows for those moments of reality. Maybe you’re in one of them right now. You have more month than you have paycheck. You have more things to do than you have time to do them. You’re stressed and you’re stretched. You have needs that outweigh your ability. The demand is more than your supply.

What is your area of lack? Where are you unable to measure up?

Let me assure you, Jesus already has a plan here, but first he’s allowing you to see your need. We miss the miracle when we fail to recognize the inadequacy first.

The disciples pointed out all they didn’t have and all they couldn’t do … and nothing happened. But when one disciple spoke up and said “we have this boy over here who has 5 loaves of bread and 2 fish” then Jesus started working.

Our God takes what there is, as little as it may be, and creates an abundance. His question to you today is WHAT DO YOU ALREADY HAVE?

After you recognize what you do have, as lacking as it may be, you are to do 2 things with it to create your abundance.

Jesus took the 5 loaves of bread and 2 fish and told this huge crowd of thousands of people to sit down. Yes, sit down and prepare to receive from that which still appeared to be so severely inadequate. Picking up in John 6, verse 11 it says “Then Jesus took the loaves, gave thanks to God, and distributed them to the people. Afterward he did the same with the fish. And they all ate as much as they wanted.”

You see Jesus didn’t touch the bread and make it magically multiply so the crowd would go wild. No one could SEE the abundance at that moment. It still just looked like 5 loaves of bread and 2 fish versus thousands and thousands of hungry people. The inadequacy was still painfully present when the gratitude was given. The multiplying happened in the thanks.

Will you, in the midst of your lack, give thanks? Will you thank God for supplying more than enough while it still appears as far too little?

This is faith, and this is what your miracle requires of you. I wonder what we’ve passed right by and totally looked over because we were so busy stressing about the lack, the inadequacy, all that isn’t enough instead of just thanking God for what there was. When we give our thanks from a genuine, faith-filled heart, God’s power is invited in to begin magnifying and multiplying.

Now there’s one more important element in this story we must not overlook. Verse 12 says “After everyone was full, Jesus told his disciples, “Now gather the leftovers, so that nothing is wasted.”

God wants to know you won’t waste what you have been given. This is a matter of being faithful my friend. If God gives you the increase you desire, will you be faithful with it, or will you waste it? If God takes your “not enough” and creates “more than enough” will it be wasted?

Our God is the God of increase. He is a magnifier and multiplier. He is a giver and supplier. He is as scripture calls him, “the owner of the cattle on a thousand hills.” His resources are unlimited and his heart for his children is unmatched. And your ability to tap into all that is available to you comes down to two simple things. Give thanks for what you do have, even when it seems to be not enough. And be faithful to not waste a single thing you have been given.

The story of the 5 loaves of bread and 2 fish feeding thousands has always been here for us. The 2 step process has always been clear – give thanks and be faithful. It’s time for us to apply that in every area of our life.

If you do, I believe you will see increase. You will see what was once not enough become MORE THAN ENOUGH. Your area of lack will become an area of abundance.

You have been given today, now don’t waste it!