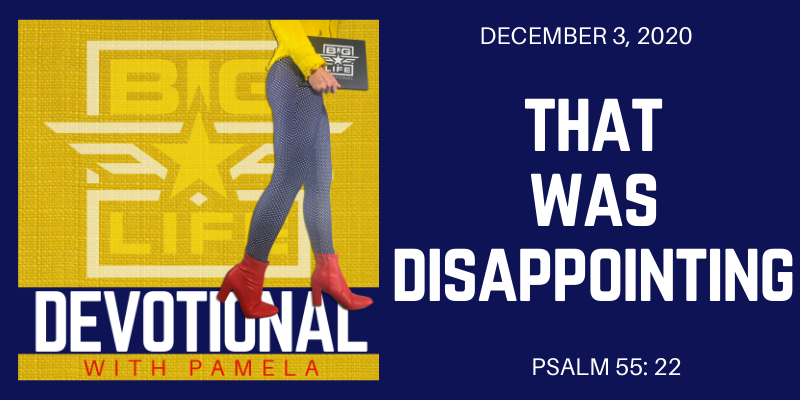 Have you ever felt royally disappointed? Disappointed by the reality of your current circumstances.

I certainly have been. Heck, I woke up disappointed this morning. Let me explain.

Late last night I chugged my final 20 ounces of water to meet my 1 gallon water goal. That meant I woke up in the middle of the night with an urgent need to go pee. I stumbled my way to the bathroom, barely opening my sleepy eyes, then crawled back in that comfy bed. My body told me it was in the wee hours in the morning, but I wanted to make myself feel better by calculating how many more hours of blissful sleep I would be getting, so I looked at my phone. I had exactly 2 minutes until the alarm would ring.

So you know what I did … I began negotiating with myself. I began concocting crazy ways I could sleep longer. If I didn’t put on my eyelashes, I could buy 5 more minutes. If I showed up this morning with the bottom half of me still in pajamas no one would know and it would allow me another 30 seconds of sleep. Heck, I could get a whole hour of sleep if I didn’t wake up and spend time with God writing this devotional. And right there in my state of disappointment I began thinking of ways I could cheat myself out of doing what I said I would do, what I know I should do , and I began making a deal to settle.

I was disappointed I would only get 2 more minutes of sleep. But if I would have made that crappy deal with my sleepy self and agreed to settle for a morning filled with less than my best, I would have only been MORE disappointed.

Someone listening right now is disappointed. Things have not gone your way. This year is not ending the way you imagined it would. Oh wait, that’s the majority of us! You haven’t made the progress you hoped for. Things still haven’t changed. You’re disappointed in the reality of your current circumstances and you feel pretty much powerless to change it.

This didn’t go the way you hoped it would. You’re here today with less progress than you had hoped for, so what do you do now? Well you sure as heck don’t settle in your disappointment! Don’t make this worse.

You’ve been letting your disappointments grow and they’re now casting a shadow on your dreams. The goals you had for 2020 are now sitting in the shadows of disappointment.

How do you deal with disappointment? Head on. Stare it down. See it for what it is and deal with it. Shine the light of Jesus on that darkness and move on. You were never meant to settle here. Settling only makes the shadows bigger. Step on out of this girl and see what God still has available for you.

Psalm 55:22 “Give your burdens to the Lord, and he will take care of you. He will not permit the godly to slip and fall.”

I’m beginning to understand in the moment of disappointment the absolute best thing I can do is give it to God. God, I’m so disappointed by these circumstances. I’m so discouraged by this reality. I’m frustrated by this unfolding. Will you take care of me in this? Will you guide me through it and keep me from slipping, falling and settling here?

Seriously, have you prayed about your disappointment? Have you turned it over to God? Creating a habit of turning over every little thing to God and asking him to help you be who he created you to be in every circumstance is an absolute game changer.

If God cares enough to help me get up at the butt crack of dawn to do what I said I would do and create a good morning, I promise he cares about every detail of your life. I promise he CAN and he WANTS to help you with your disappointment and guide you in making the decision to move towards his best for you.

Psalm 84:11 “The Lord will withhold no good thing from those who do what is right.”

Do what you can with what you have right where you are. Don’t allow your disappointment to create a domino effect of greater disappointments as you give less than your best and settle in those dark shadows of all that didn’t work out for you. All the disappointments in the world will never change the promises of God over your life.

Partner with God in this determination, and sister let the disappointment go.

By Lonnie|December 3rd, 2020|Categories: Devotionals, Podcast|Comments Off on 742 That Was Disappointing