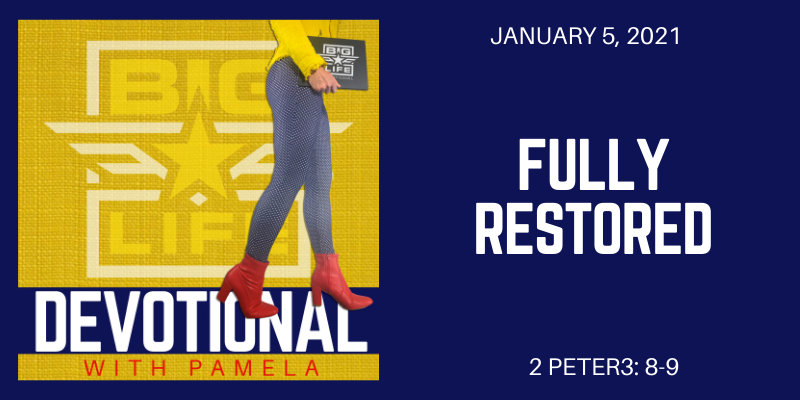 Is there something in your life that has fallen apart and appears hopeless today? Something seemingly broken beyond repair only serving as a painful reminder of dreams left unfulfilled? Maybe that broken thing in your life is you. You feel broken. You have fallen apart. You’re nothing like you used to be, having lost who you are somewhere along the way. And maybe you even asked God if it’s remotely possible for things to change in this New Year … well, he’s answering you directly and personally right here today. I know without a doubt he gave me a very specific message to share with someone who is seeking.

GOD IS A HEALER, REDEEMER and RESTORER.

He had a vision for who you could become when he knit you together in your mother’s womb. He had dreams for you and planted them within you as desires to guide you to the life only you can live. But life happened and things got tough, now who you are today isn’t quite who you imagined becoming. You never imagined at this age and stage you would still be struggling with the same old crap.

You may have given up on you, but God certainly hasn’t. He gave you this new year of life to heal you, redeem you and restore you. His desire is not for you to continue with this brokenness and unresolved issue. His desire is to bring you back to who he created you to be.

While Jesus walked this earth, he healed many people. He gave the blind man sight, he stopped the woman’s bleeding, he restored the little boy with seizures, he gave the crippled man strong legs to walk again. He responded to faith with healing.

He also redeemed people who had lost their way. Peter, the one who betrayed Jesus and turned him over for crucifixion was still used to continue his work and build the church. Saul was the meanest, most vicious man in his day, relentlessly cutting off the head of anyone who claimed to follow Jesus. But one encounter with Jesus changed Saul into Paul, and redeemed every way he had been wrong to use his passion as a crusader for Christ. Jesus saw beyond the mistakes and redeemed their potential.

And oh how he restored. I never understood what a role Mary Magdelene played until I watched The Chosen. (My friends, if you haven’t watched this series yet, make it a goal to watch season 1 this month. All 8 episodes are available on YouTube, each just over an hour long.) Mary Magdelene was the woman plagued by 7 demons. She was broken and believed to be beyond hope. People avoided her and she hated who she had become. Some accounts label her as a prostitute, others call her a sinful woman. But that didn’t stop Jesus.

Mary Magdelene is mentioned more times in the Bible than most of the disciples, and is by far the most talked about woman in the entire bible. This is who God chose to use. A woman he could restore.

So, tell me again, why wouldn’t he choose you?

Your brokenness, your struggles, your weaknesses, your past, and your questions of today do not diminish God’s potential work in your life. He knows exactly who you can become and what you can do with your life, and he still hasn’t given up on getting you there.

Come be restored by the Almighty now. Come let him heal you and redeem you and guide you in returning to the good plans he has for you. Plans to prosper you, not to harm you. Plans to give you hope and a future. Those plans have NOT been cancelled. This hasn’t been ruined.

Jesus hasn’t thrown his hands up and walked away from you. He spread his arms out and offered his life for you.

Why? So through him you can be restored.

Have you ever witnessed the process of restoring an old car? I was the not so proud driver of a 1972 Monte Carlo as a teenager. This was the car I was nearly born in, then it became my primary means of transportation once I turned 16. I hated that car. I hated it’s puke green vinyl seats. I hated it’s loud engine and old push button radio. But most of all I hated the whole driver side of the car was gray primer. It was so embarrassing. I would intentionally park in the school parking lot so that no one could see the driver’s side.

What I didn’t understand back then is the gray primer was keeping that car from rusting into a pile of junk. It was protecting the spread of disease in the metal. It was in process of restoration.

The process of restoration isn’t always pretty. There are stages of cutting out the rust, sanding down the edges, and putting on the primer. The shiny new paint comes later in the process.

YOU ARE IN PROCESS. God knows exactly what he is doing and he says it’s okay if this process takes a little time. He has a vision of you fully restored and he says you’re worth the work it will take to get there.

He’s not ashamed of you. You are his pride and joy. His greatest masterpiece. And now he is lovingly restoring you to his original design.

Anyone who owns an antique restored car takes great pride in it. They have their own car clubs and parades to show off their restoration work. They proudly display the original features of the car which were far more expensive to restore than just replace. And God is the same with you. He’s proud of what he is doing in your life. He takes great pride in investing in you and he wants to show you off!

2 Peter 3: 8-9 “With God, one day is as good as a thousand years, a thousand years as a day. God isn’t late with his promise as some measure lateness. He is restraining himself on account of you, holding back the End because he doesn’t want anyone lost. He’s giving everyone space and time to change.

Here in this space and time God is doing a great work in you. He is restoring you. He doesn’t want you to remain broken because of what happened, what you lost, or where you have failed. And he certainly doesn’t want you to sit and rust away with unmet potential. God is holding back the end of time to allow your restoration. He is doing a work in you, and honey he isn’t done yet.

What a story of restoration you will have. What a beauty you will be. You will undoubtedly be more valuable than ever before. But right now, you may have a little gray primer, and that’s okay. You’re in process of returning to who you were created to be. God takes great pride in this process.

By Lonnie|January 5th, 2021|Categories: Devotionals, Podcast|Comments Off on 764 Fully Restored