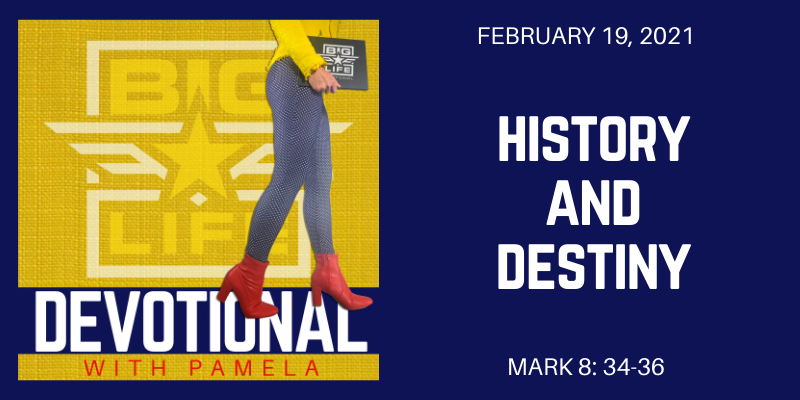 You have a history. It’s where you have been and all have you gone through. It’s what has happened.

You also have a destiny. It’s what you have been prepared for with your history and what you can step into now.

Girl, you may have lost in the past, but your losing streak could be over. You’ve been defeated a few times and ended up on the losing end, but this could be your time to begin winning.

You were made to be a winner, but all good winners must be humble. How do we become humble? We first lose. If you never taste the bitterness of defeat, you’ll be a lousy winner. God doesn’t need any lousy winners running around spreading his message. He needs humble winners who know what it’s like to be down and who’ve overcome. Destined winners with a history.

That’s what you are – you’re a destined winner with a history.

Could all your struggle and all your setbacks be nothing more than a setup for your victory now? What if God always had success in mind for you, but he knew first the defeat would be best for you?

My son was on a little league football team in elementary. We were the black and yellow Tigers. The team who could never win. One entire season we never tasted victory. Every game ended in “good game boys, you tried.” Several members of the team quit or parents moved them to a winning team, while we continued to lose. The next season our boys showed back up and pulled off their first win. A few more wins followed, but mostly loses.

Then there was the third season. Our losing streak was over.

Our boys in black and yellow were now the toughest team in the league. That third season, they didn’t lose a single game. The championship game comes and my son is throwing up Gatorade on the sidelines during warmups. The nerves were high. These boys had dreamed of this moment when all they could do was lose. The moms had their faces painted and flags waving, making the Dallas Cowboy cheerleaders look 2nd rate. Our boys won the championship game in overtime. My husband was a coach. I’m pretty sure he cried. We all cried. It’s one of my top 10 favorite moments of life.

What if you have a victory in you, but girl you’re still in the season of showing up again?

Maybe you’ve been in a season of defeat. Your butt has been handed to you on a silver platter. Unlike the song (all I do is win win win), all you do is lose, lose, lose. And all the while, God has allowed it. Why? Why would a good and loving God sit back and watch you lose all this time? Because he’s making you into a winner now. Not a lousy winner. A humble winner.

We want to run from suffering. We want to jump ship and leave behind any resemblance of loss. That’s normal. Nobody likes defeat. Nobody wakes up and says “you know, I would like to lose today. I enjoy being a loser.”

But Jesus says to embrace suffering. Why embrace it? Because it will strengthen you.

The victory without defeat first will cause you to lose your way. Your way to what? Your way to who you really are and the life God created you for.

God allows a losing season. He allows others to leave in pursuit of the winning team. He also allows others to talk smack that hurts you to your core. That’s okay. Let them leave. What will be left is exactly what you need. You will be lacking nothing for your victory.

I know you’re familiar with your history. Maybe that’s all you think about. What you went through, where you went wrong, and who wronged you. How about we get over that now and leave history where it belongs as history. It’s done. It’s over. Move the heck on now.

You’re walking with Jesus and Jesus is leading you straight for victory. Let him lead.

And yes, he will lead you through suffering, embrace it. Follow him and he will show you how.

And through it all you will find the real you. The you he created you to be.

And you will be victorious. Hold your head high sister, straighten your crown and remember who you are. You are more than a conqueror through Christ Jesus. It’s time to win.

By Lonnie|February 19th, 2021|Categories: Devotionals, Podcast|Comments Off on 797 History and Destiny