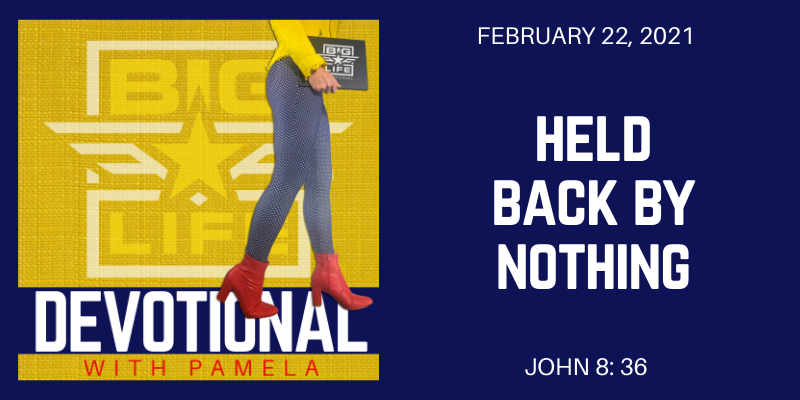 Today we begin the final week of February. Maybe it’s been a hard month, and for the shortest month of the year, it’s been ridiculously l-oooooooo-n-g. You started this month with a plan to make progress, but did you? Really, did you make progress? Or were you held back?

What holds you back sister? If there’s a world of potential within you, what is keeping you from boldly stepping right into that potential and living up to all God put inside of you?

For some of us we are held back by our own laziness. It’s our over-thinking, our lack of action, our craving of comfort, and our procrastination that holds us back. Or it could be our lack of commitment, our disorganized scatter, or our perpetual mid-month fizzle. Maybe it’s that broken record that retells your past and continually reminds you of every single way you’re not good enough. Well that will certainly hold a girl back.

Did you do all you could with this month of life? If you didn’t, what held you back?

I believe God has asked me to BOLDLY drop some truth here this morning, so prepare yourself now.

Would Jesus be defeated by your circumstances? Would he be delayed by your past or detoured by your habits? What would Jesus do in your situation?

Oh yes, remember those little bracelets everyone used to wear? WWJD: What would Jesus do? What would he do waking up to your reality on this final Monday of February 2021?

Well, let me tell you exactly what Jesus did when everything went wrong. When the attacks were real and people were against him. When he had been nothing but good and he was treated bad. When the sky went dark and the grave closed in. What did he do then?

He rose up. Oh yes he did! He was dead and buried in that tomb. Everything that could have gone wrong had gone wrong. There was no last minute rescue off that cross. Angels didn’t show up and save him from his crucifixion. It was as dark as dark could possibly be. But what did Jesus do … HE GOT BACK UP!

So, what would Jesus do with your current circumstances? I assure you my sister, he would get up! What would he do when February has been so hard and things have gone so wrong? Oh, he would get the heck up! He would rise above it all and be better because of it.

Here’s what we often miss … when Jesus was in that tomb for 3 days, he made a little trip. A little trip to Hades where he went on a mission to rescue me and you from every single thing that would ever threaten to hold us back.

1 Peter 3: 18-19 “For Christ also suffered for sins once for all, the righteous for the unrighteous, to bring you to God. He was put to death in the body but made alive in the Spirit, in whom He also went and preached to the spirits in prison.”

Who were these spirits in prison Jesus went and spoke to during his time in the tomb? We believe Peter is referencing the other fallen angels who joined Satan in his attempt to ruin all of God’s goodness. Jesus went to Hades and had a little chat with them. What do you think he told them? I think he told them Satan had been defeated! It was FINISHED!

And while Jesus was there, he did a little thing … he grabbed the keys!

Revelations 1:18 Jesus says “”I am the Living One; I was dead, and now look, I am alive for ever and ever! And I hold the keys of death and Hades.”

Understand Jesus now holds the exact key to set YOU FREE. The very thing the enemy has been using to hold you back from your greatest potential … well it has no power over you. Jesus has the key and he has declared you free.

Jesus has the keys and honey, he has set you free from all of that. He came to not only give you life, but what does scripture say … he came to give it to you to the FULL. He came to set you free, ALL THE WAY FREE. To live, and live BIG. To be more than a conqueror, to be a champion.

So I think in this final week of February where maybe the challenges were a little bigger than you imagined and a short month sure has seemed to drag on forever, you need to remember exactly what Jesus would do here. HE WOULD RISE UP AND HE WOULD DECLARE VICTORY. He would tell every single thing that has ever threatened your destiny that it has been defeated. He would walk freely with purpose and overcome every attack of the enemy.

So hey sister, my fellow daughter of the king and follower of Jesus, claim your power today. You have the spirit of God living within you. The most powerful force in the world is inside you. Be held back by NOTHING now.

You have been set free. Free to live up to your potential. Free to break bad habits. Free to walk away from those chains. Free to rise up above the low level living crap you’ve been caught up in before. You are free, free indeed.

Rise up and declare your victory. Everything that has ever threatened your potential has been defeated. The attacks of the enemy will not be successful on you. Today, you move forward with courage towards that which your good, good Father has planned for you.

By Lonnie|February 22nd, 2021|Categories: Devotionals, Podcast|Comments Off on 798 Held Back By Nothing