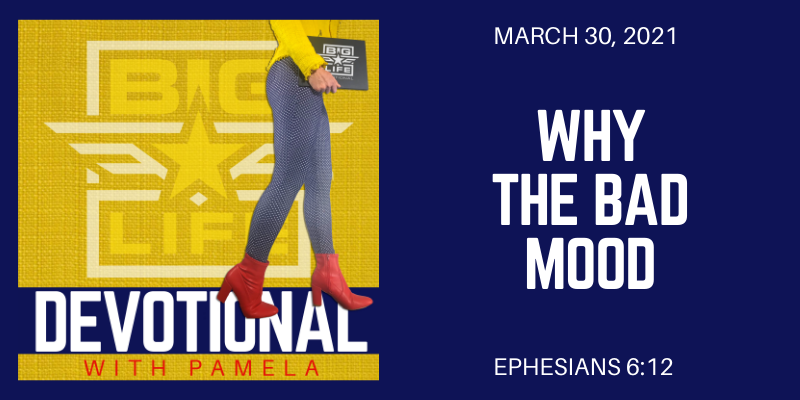 Have you ever just woke up in a bad mood for no good reason? Have you ever been hardcore struggling when you had every reason to be pretty darn happy?

Why does that happen? Why is there sometimes this internal battle stirring us up making us feel restless and unsettled? Answer, because there IS an internal battle going on. Literally, there is a battle happening that you can’t see. You need to know what’s happening here so you can win the battle and not be defeated here.

Ephesians 6:12 “”For we are not fighting against flesh-and-blood enemies, but against evil rulers and authorities of the unseen world, against mighty powers in this dark world, and against evil spirits in the heavenly places.”

You can’t see the battle, but you can feel it. You can feel it in your spirit, in your mood, in your attitude. You can feel the battle in your perspective as everything is shaded with negativity and generally pissy-ness. It’s real. It happens, and it happens to all of us. Sometimes it’s because our hormones are a little out of whack and we should probably eat a piece of dark chocolate, but not like the whole bag of dark chocolate because that will only make you puffy, and no one needs a hormonal puffy girl … that’s a recipe for disaster. But it’s not always hormones. You can’t always pinpoint what’s causing you to feel this way, but you can bet there’s a battle with the nasty fingerprints of our enemy all over it.

You have to know what these enemies of yours want. They don’t give a flying flip about your money or your possessions. What you have is of no concern to them. It’s WHO YOU ARE that’s under attack. It’s what you carry within that is of value.

THIS IS HOW HE DEFEATS YOU.

A person can lose everything and still live a good life. I’ve seen genuinely happy people living in shacks with dirt floors, experiencing God in every detail of their existence. And I’ve seen genuinely miserable people with mansions and yachts who are so overwhelmed by earning more that they never get a glimpse of their good, good God in the middle of it all.

Demons from hell were sent on a mission today to attack your mind. Maybe your weakness is worry, so you woke up to things worth worrying about. Maybe you’re a girl who lives in stories of the past, and once again those old familiar stories were playing this morning. Don’t you see what’s happening here? You’re not fighting against flesh and blood, you’re fighting against the evil rulers of the unseen world and dang it, stop giving them the victory!

We so quickly roll over and accept defeat over the unseen. We accept a bad mood. No, recognize who orchestrated that bad mood. Check the fingerprints. Do you think that was by design of the Almighty One or the Worthless One? God never once said, “ya know, today I think I’ll give her a bad mood. I’ll make her generally pissy about life. I’ll paint everything dark here and take away all peace.”

Never. God never does that. But you know who always takes that cheap shot … yip, that’s right. That would be Satan! So don’t you accept it. Don’t you claim it as your truth.

Repeat after me: HE DOESN’T WIN TODAY!

Back up and read the 2 verses before being warned of who we’re really battling and it says “Be strong in the Lord and in his mighty power. Put on the full armor of God, so that you can take your stand against the devil’s schemes.” We are not called to be weak and passive in the unseen battle for our minds. We’re not called to be submissive in the battle for our peace. We’re not told to go down quietly in the battle for our mood. HECK NO. We’re told to be STRONG IN MIGHTY POWER OF THE LORD! We’re told to put on God’s armor and take a stand against the devil’s schemes.

Yes, the full armor of God in Ephesians 6: 14-17 tells us about the belt of truth, with the breastplate of righteousness, shoes to walk in peace, the shield of faith, the helmet of salvation, and the sword of the Spirit.

Fight today with the full armor of God. Don’t just surrender to the offering of a bad mood and overwhelming anxiety. Don’t accept negative thoughts and a poor attitude. Stand up and fight sister!

Maybe this isn’t about you at all, and maybe this is about their own battle, because remember they too are battling the evil ruler of the unseen world. Their peace is under attack. Their mind is the battle grounds. Their mood is being hit hard.

Let’s all just help each other here. You know what we can do today … we can see the battle for what it really is and stop surrendering so darn easy in our own lives, and we can offer some grace as others fight their own unseen battle.

By Lonnie|March 30th, 2021|Categories: Devotionals, Podcast|Comments Off on 824 Why the Bad Mood?