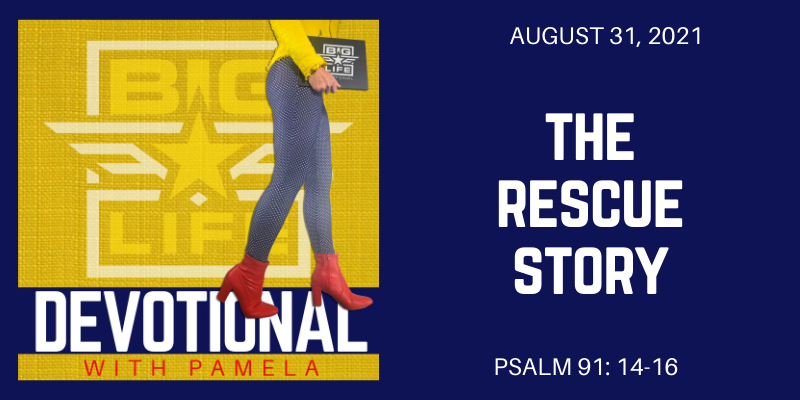 What is your rescue story? When were you found, where were you picked up, and what have you been saved from? Some of you have one heck of a story because of where you came from. Sister, never be ashamed of that. You are a living testimony of the redemption power of God that radically turned a life around. We need to hear more of that!

And for those of us who think we never required that redemption power in our lives because we didn’t screw things up too bad, may we realize that is only because of the grace of God that kept us from ever being touched by life in extreme ways. Your imperfection could have just as easily landed you in the gutter too girlfriend. None of us are righteous.

Some of us are fully aware we’re currently living in that destiny … others are still in the process of realizing destiny. That’s okay. We’re all on a journey and the fact that we’re here tells us we haven’t arrived yet.

Psalm 91: 14-16 “The Lord says, ‘I will rescue those who love me. I will protect those who trust in my name. When they call on me, I will answer; I will be with them in trouble. I will rescue and honor them. I will reward them with a long life and give them my salvation.’”

Rescue. By definition rescue means to save from confinement, danger, or evil. This is God’s plan for you. To rescue you. To save you from confinement. That’s right, he doesn’t want you to be held back and restricted. He came to set you free. Free to live up to your potential. Free to step into the BIG Life he created you for, and anything that serves to hold you back, he’s here to save you from.

So sis, what’s been holding you back? What’s causing you to settle for less than God’s best for you? May you see that now for what it really is, and may it be banished in the name of Jesus. May you be let loose and set free from that which has confined you, by the rescuing love of God.

There is danger and evil all around you. The enemy is on the prowl like a lion, but don’t give him more power than he deserves. He is NOT a lion. He pretends to be one. He is a fallen angel and he is destined for an eternity of defeat. He has no authority in your life when you’re saved by God.

I don’t even know all the evil plans of the enemy that God has saved me from, but I’m on my face grateful for the rescue! I don’t know all the close calls of the devil’s attacks, but I’m secure in the protection of the Almighty. That security doesn’t insulate life from it’s hardships and struggles, but it reminds me of how this story will end. I am rescued, I am protected, and I will be rewarded. In today’s scripture, underline those 3 words. Here it is again:

Psalm 91: 14-16 “The Lord says, ‘I will rescue those who love me. I will protect those who trust in my name. When they call on me, I will answer; I will be with them in trouble. I will rescue and honor them. I will reward them with a long life and give them my salvation.’”

What is our role in this? 3 more words to circle: LOVE, TRUST and CALL.

‘I will rescue those who love me. I will protect those who trust in my name. When they call on me, I will answer; I will be with them in trouble.

When we love, trust and call on God, he will rescue, protect and reward us.

You know what I think about that? I’m thinking DEAL!!!!! That’s a darn good deal here sister. You should take it!

Fall right into your rescue story. Let all that has happened, all that you’ve gone through, all you’ve struggled with, be redeemed now. Let it be exchanged for what God has available for you!

This past weekend my friend Jessica went hiking in the Shawnee National Forest. On her final day when leaving her cabin, she discovered a dog under her car. She gave him some water and a little leftover food, he rubbed against her leg and licked her. As she drove away, this dog chased her. He ran and ran to keep up with her car, then she realized she had forgotten to lock the cabin door, so she turned around. Arriving back at the cabin, the dog awaited her. She left and again, the dog relentlessly followed her. Fearful it would get run over, she put the dog in her car and returned him to the only home in the forest. There the man said, “M’am, that’s not my dog. I’ve never seen that dog. Seems to me you’ve got yourself a new dog.”

And my friends, this is exactly what God does for us. He rescues us from where we are, no matter what we’ve come from. No matter what baggage we bring along with us, God says “I’ll take her and we’ll figure this out!” And so, he brings us home. He returns us to the path he has planned for us. He calls us his own and cares for us to show us the life available to us now. He gives us a new identity that leaves the past in the past and we never have to go back there.

God came back for you, girl get in the car! Go where he is taking you!

This also reminds me of a news story I read last week. The headline said “Woman Discovered Dangerous Truth About Rescue Dog.” A woman saw an injured dog on the side of the road, so being the genuinely good person she was, she stopped to rescue the dog. Once in the passenger seat with her, she snapped a few photos with it, then rushed it to the vet. Upon arrival at the vet she discovered this was no stray dog, she had just rescued a WILD COYOTE! Yes, she unknowingly put an injured wild coyote in the car seat next to hear, leaned in close for photos, then drove it to the vet. She had no idea what she was trying to rescue.

Where are my wild coyotes at? You’re a hot mess and you create chaos everywhere you go. You tear crap up. You hurt people. You have a track record of biting back. Maybe you’re not a wild coyote yourself, but you’ve raised one. You love one. You’ve tried desperately to help one and you’ve only gotten hurt in the process. Yeah, me too.

Well let me tell you something, God knows EXACTLY what he’s getting into! He’s not confused thinking you’re someone you’re not. He’s not fooled by your temporary good behavior thinking you will always be good. He knows a wild coyote when he sees one and HE’S STILL COMING TO RESCUE YOU! Yes her, and yes him. He’s coming to get them too!

He has a rescue story for every single one of us and he doesn’t wish for any one of us to get away. 2 Peter 3:9 “The Lord isn’t really being slow about his promise, as some people think. No, he is being patient for your sake. He does not want anyone to be destroyed, but wants everyone to repent.”

Remember God’s plan here is to rescue, protect and reward. Your part is to love, trust and call on him. Calling all stray dogs, wild coyotes, angry wolves, wandering beasts, and lost puppies, it’s time to go home now. Your rescue is here.

By Lonnie|August 31st, 2021|Categories: Devotionals, Podcast|Comments Off on 934 The Rescue Story