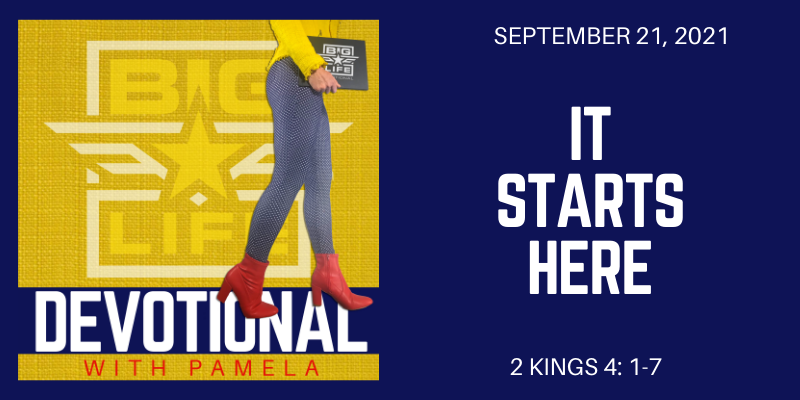 God is the great multiplier. His math doesn’t make sense. It stretches what could never be enough and makes it more than enough. God takes what is grossly insufficient and makes it magnificently abundant. That’s just the way God does it, however you have a role in this. God multiplies whatever you bring. If you bring nothing, God can’t multiply zero. Starting with zero and multiplied by God’s miraculous abundance, you still end up with zero. Zero times anything is zero.

You can’t expect God to bless what you won’t do. He can’t work in what you’re not willing to give. His multiplying power is at a halt when you bring zero to the table.

God cannot and will not grow what you’re not willing to start. He cannot bring together that which you’re not turning over. It’s simple math babe. God is the great multiplier, but no matter how strong his multiplying power is, anything times zero is still zero. You give no effort, God has no effort to multiply. You offer no time, God has no time to work in. You allow for absolutely zero faith and dismiss everything, God has nothing to grow in you.

But remember, Jesus said in Matthew 17:20 ““I tell you the truth, if you had faith even as small as a mustard seed, you could say to this mountain, ‘Move from here to there,’ and it would move. Nothing would be impossible.”

God doesn’t require your huge, unshakable, unquestionable faith. He only needs a little, tiny piece of faith that says ‘Maybe God can use me. Maybe God is going to do something here. Maybe I can trust God in this.’ This tiny starter faith has the power to move mountains because of God’s multiplying power. You give him a little and he multiplies it by his abundance, then nothing shall be impossible.

But we dismiss what little we do have the ability to do, the little we could give right now, and we wait for more. Hey sis, more doesn’t come from you. More comes when you offer what little you already have to the God who can make it so much more. You think you will do great and mighty things when you have so much more to offer, but you won’t. You’ll always be stuck in thinking what you have isn’t enough and what you can do is insufficient. It will never feel like enough in your hands. But in God’s hands it becomes something greater than you could ever imagine.

You want to see what you have multiplied? Offer it to God! You won’t believe what you already have the start of right now!

There once was a widow who had run out of money and she had no way of paying her debts. So, the bill collectors were coming to take her sons as slaves. We read in 2 Kings 4: 1-7 of Elisha, a prophet of God coming to help the widow. Elisha says “Tell me, what do you have in the house?” “Nothing at all, except a flask of olive oil,” she replied. And Elisha said, “Borrow as many empty jars as you can from your friends and neighbors. Then go into your house with your sons and shut the door behind you. Pour olive oil from your flask into the jars, setting each one aside when it is filled.” So she did as she was told. Her sons kept bringing jars to her, and she filled one after another. Soon every container was full to the brim “Bring me another jar,” she said to one of her sons. “There aren’t any more!” he told her. And then the olive oil stopped flowing. When she told the man of God what had happened, he said to her, “Now sell the olive oil and pay your debts, and you and your sons can live on what is left over.”

This was a miracle. A miracle of God’s multiplying power. Where did it begin? It began with the only thing the widow had. She had a flask of olive oil. So, that’s exactly what God used to provide for her in miraculous ways. He started with something, anything, and he multiplied.

Imagine having so little that the only thing you have left in your house is a bottle of olive oil. Imagine that for a moment. This, this is all I have. This green bottle with a yellow label that reads Bertolli extra virgin olive oil. And imagine believing that little, seemingly insignificant thing is how God is going to save your family. That seems ridiculous.

What could God do with the little bit you have to offer today? Well you may not believe it where you are right now, but I KNOW God can radically change everything in your entire future starting right where you are with absolutely anything you are willing to offer him. Anything. Any effort. Any time. Any resource. Any energy. Any work.

It may not be a lot, but I kindof think God loves to show off his power in our little bit and make it something so much greater. This is how we know it’s God! There’s no other possible way for things to work out. There’s no other reasoning behind this breakthrough. This is God’s math!

But God’s math always begins with what we are willing to offer first. The widows flask of olive oil kept running until every jar was filled. And when every filled jar was sold, it was enough to pay her debt in full plus sufficient money for her and her sons to live on. That’s God’s multiplication!

So my sister, if God walked into your house right now and said “what do you have”, what would you be willing to sacrifice? If he looked at your schedule and asked how much of your day you would be willing to offer, what would you give? If he asked how much you could do, would you dismiss it as not enough and miss the possibility of God’s work in your life? Are you waiting to build up to more, then make your offering of what you have?

Hey, God doesn’t want to wait on your future offering, he wants your right here, right now. He wants your little bit given in faith so he can multiply it beyond your belief. He wants to show you what he can do TODAY instead of banking up for some time in the future when you are more self-sufficient. God doesn’t need you to be self-sufficient, he needs you to be sold out!

You may feel you have little to offer, but in God’s mighty and capable hands, this is more than enough. But, it only becomes more than enough when you turn it over to him. When you show up and do the work. When you give the effort. When you make the move, take the next step, and offer what you have, THEN GOD MULTIPLIES.

If you’re giving zero, even with God’s greatest work, it will still be zero. Stop giving zero. Stop holding back. Stop dismissing yourself from the greatness God has planned just because you feel you have less than the best to offer. You’re missing out on something miraculous here, and the miraculous begins with what you already have today.

What little you have, offer it today and watch God do his miraculous math. It starts here and it starts with what you can do right now.

By Lonnie|September 21st, 2021|Categories: Devotionals, Podcast|Comments Off on 949 It Starts Here