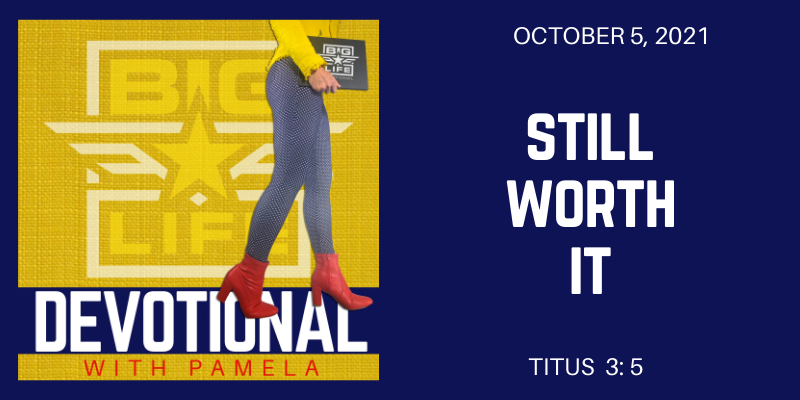 There’s a tragedy happening in your life. That tragedy is affecting just how much of your God given potential you realize. It’s impacting every area of your life and just how much of God’s good plan for your lifetime you experience.

Which is worth more, a brand new crisp $100 bill, or the one that’s been washed a few times, crumpled and rugged? You would take either, right? The value doesn’t change based on its condition. $100 is worth $100 because the maker of that bill declared it’s worth and nothing changes that.

In your purse right now, do you have actual money? A dollar bill, a 5, a 10, a 20? Did you know with your money, you’re likely also carrying cocaine? YES, you have drug money right now! Traces of cocaine can be found on 80% of dollar bills. This is money that was once rolled up and used to snort drugs, or exchanged in a drug deal. Does that mean you don’t want the money any more? Does it mean you’re going to throw it out?

No, you still want it! Why? Because that money will still spend. It’s worth has not been impacted by the illegal acts it was used in. It’s value is not determined by what’s on it. Value is determined by who made it.

You may have done some things you shouldn’t have done. You may have willingly stepped into things you knew were wrong, but you stepped on in anyway. You may have racked up more guilt and regret than you can possibly carry around. And NONE of this changes your value. Nothing cancels your worth. Even through all of this, you are still worth what God said you’re worth.

Now, did you know that same money with traces of cocaine likely also has crap on it? Yes, literal fecal matter! 94% of dollar bills carry bacteria from crap. Waste is on that money. But baby, that money still spends doesn’t it?

Titus 3:5 “He saved us, not because of the righteous things we had done, but because of his mercy. He washed away our sins, giving us a new birth and new life through the Holy Spirit.”

You can’t work your way into good standings. You can’t earn this grace. God determined your worth, and paid the high price for your 2nd chance, before you even began your 1st chance. Yes, before you ever needed grace, God allotted unlimited grace for you. Before your failure, he made a plan for it to be used for good. Before your misstep, he made a way back. Before your questioning, he had the answer. Not because of anything you could do. Not because of some spotless, blameless life of perfection you’re supposed to attain, but because of his mercy.

When you fail to recognize your worth; when you belittle your value and cut yourself down, you deny what God created and what Jesus made possible.

Nothing you have done will ever change God’s view of you. Not good, not bad. There’s no place you could ever wander that would be out of God’s reach. No darkness you could hide in out of his sight. He always sees you, and he sees the real you. His beautiful creation just as he imagined you to be, full of potential to do remarkable things in your lifetime.

Don’t assume a lower position because of what you’ve been through, honey you are worth just as much as anyone else. That’s what God says, and GOD’S NOT WRONG!

So let’s end this tragedy. The tragedy that affects just how much of your God given potential you realized. The tragedy that’s impacting every area of your life and limiting how much of God’s good plans for you you get to experience. This whole unrealized worth ends now. This whole believing you are anything short of a miraculous masterpiece designed by the Almighty to do remarkable things, well that’s over!

Now, you believe who God created you to be and you recognize the value he has declared you to be. Proven you to be. You were worth his best, so he gave his best all for you. And even after all you’ve been through, all you’ve done and all you haven’t done, you’re still worth Jesus!

By Lonnie|October 5th, 2021|Categories: Devotionals, Podcast|Comments Off on 959 Still Worth It