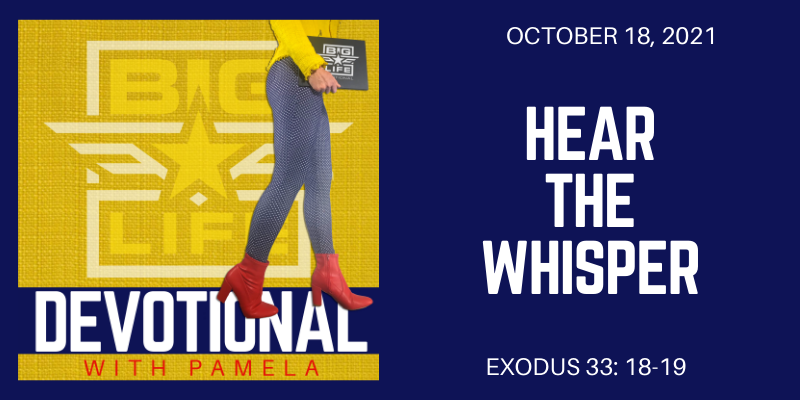 There’s a whisper within your soul. A whisper calling you on to discover more. More of who God is and more of all he created for you, and more of what he created you for. This whisper from the Almighty says “I have something to show you.”

Have you heard it? God is trying to show you something. Something different than you have been seeing. Something more than you’ve been experiencing. Will you follow him to discover what he wants to show you now?

I am an adventurer at heart. I love new and different. If you’re familiar with the ennegram, I am the 7’ist seven of all sevens. It’s evident in my lifestyle after selling most everything, giving the rest away, and traveling full-time. However when I find somewhere beautiful, I tend to settle. I dig in and create a routine and let the rhythm of life grab me. The problem is, at first I have a routine, then that routine has me. The rhythm begins to lull me into a settled life and the quest for adventure dissipates. That’s when God begins whispering to me “I have something to show you.”

I almost missed what he wanted to show me. I almost settled for the beauty I had already seen, dug in my heels and refused to venture further. And oh, all I would have missed. He wanted to show me so much more.

In scripture, Moses asked God to show him his glory. He was seeking God’s presence in his life for real. He wanted to know what God was doing and where he was leading him. He wanted tangible evidence God was going to guide him.

The Lord’s response in verse 19: And the Lord said “I will cause all my goodness to pass in front of you …” With that, Moses eyes were covered so God’s face could not be seen, but as he passed by, he saw his back. Then he knew, he is real, and he trusted if God said he would show him favor, favor would be his. If God said he would go before him, then God was ahead making a way. He would never be alone again, because God’s goodness was in front of him.

And God has been whispering to you sweet girl, “I have something to show you.”

Lord, show me your glory. Show me what you’re doing here. Show me where you want me to go. Show me! I am ready to see what you have for me.

And now, all of God’s goodness will pass in front of you. This is how you see God’s presence in your life, look at all he has created for you. Look at his relentless love on beautiful display. Open your eyes and see his goodness right here in front of you.

In the past 2 weeks I have seen the turquoise waters of the islands, the wide open star filled skies of Montana, the Black Hills of South Dakota, the deep blue lakes of Idaho, the snow covered peeks of Mount Hood in Oregon, the majestic Redwood Forest, and the oceanside cliffs of California. Here, God’s goodness has surely passed in front of me. He has been showing me who he is in his creation. His majesty. His divinity. His creativity. His power.

Where have you settled, dug into routine and all that is comfortable, but now you know God is whispering to you “I have something to show you.”

Are you ready now? Will you ask to see his Glory? Will you boldly approach the throne as his beloved daughter and say “Father, show me more of you now.”

He is more than you have been seeing. Now he whispers “I have something to show you.” Are you ready to see?

You see my sister, the very thing you’re avoiding may be exactly what God is calling you to. He’s calling you here, not to punish you, but to show you his glory. This is where God’s goodness will pass in front of you.

We so quickly put God in a box and try to label and contain his power. But every time you do, God breaks your little box and shows you more than you’ve seen before. And maybe that’s what is happening right now … he’s breaking your little box. How you thought it should be, how you assumed it always would be, all that got broken. Broken because honey it was too little. Too little for your unlimited God. And in this brokenness God whispers, “I have something to show you.”

Now, here in this place of surrender, won’t you release your tight clinch on all you’ve been holding back and say “yes God, show me your glory.” Maybe you’re like me and you really like what you have and you feel what you’ve seen is good enough so you’re ready to settle here. Oh sister, there’s so much more! Trust God enough to follow that whisper in your soul and say “okay God, what do you want to show me next?”

This is what God has been trying to show you, beautiful girl. His goodness.

Will you seek God’s glory now? Will you be open to his goodness he is causing to pass right in front of you? Will you dare to embrace what God is doing here for you and know that it is for ultimate good?

At the end of your life, which sister remember you are one day closer to that end, don’t you want to be able to intimately know God as your creator, having beheld all the beauty of his creation, and never missed a day of his goodness he allowed to pass right in front of you? Don’t you want to see his glory?

God is whispering “I have something to show you”. Not to spoil it or anything, but it’s his glory! You’re going to want to see this!

By Lonnie|October 18th, 2021|Categories: Devotionals, Podcast|Comments Off on 968 Hear the Whisper