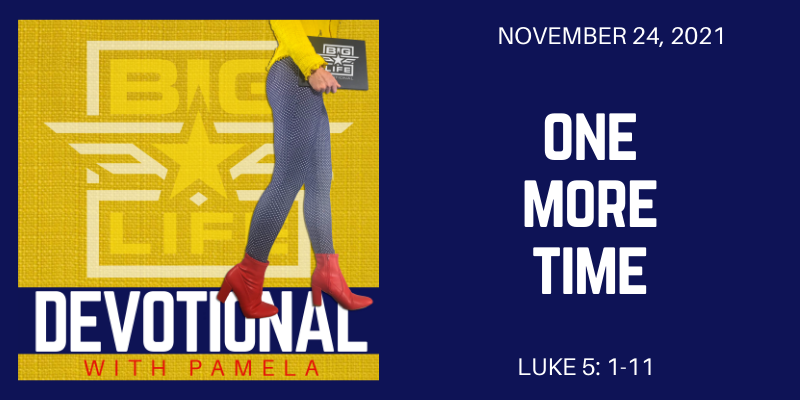 My husband is a fisherman. He will fish in any weather under any conditions. Me on the other hand, I discovered I like catching a whole lot more than I like fishing. I want to reel something in, and I prefer that something to be really big. But my impatience to the process rarely allows me to be profitable.

Maybe you’re like me, and when you try something you want to know it’s actually working. Lack of result creates loss of interest and you move on to the next thing real quick. But what if all this hasty moving on is causing you to miss the catch God planned for you?

Four of Jesus’ disciples were fishermen. They were hand selected by Jesus to follow him so he could teach them to continue his ministry after his crucifixion. Why would he choose fishermen over scholars? Why fishermen over professional speakers? Because fishermen knew how to believe in something they could not see.

Andrew, Peter, James and John were the fishermen. Not just leisure fishermen, but professionals. They fished every day. And they knew sometimes, for reasons they couldn’t explain, they could do everything right and catch nothing. And other times they would bring in a haul. They knew the value of “one more time”. One more time it might happen. One more time might be THE time. One more time and what’s been under your boat all along may be in your boat.

But dang I hate waiting. I like catching. I like breakthroughs. I like proof that what I’m doing is working. I like to see with my own eyes what I’m going for, then I like reeling it in. But, that’s not the way it works. Jesus is calling us to a life of faith, and Hebrews 11:1 tells us “Faith is confidence in what we hope for and assurance about what we do not see.”

You can’t see it right now, but there’s something in the water looking at your hook. You don’t feel it yet, but this is about to work. If you won’t give up and walk away from this, you will see proof this is all real and God has been working on your behalf.

Why would Jesus choose fishermen as his closest friends and followers? Because they knew what it was to have faith. Every day, all day, they would confidently hope for what they could not see in the waters. And isn’t it interesting to see the timing of their encounter with Jesus? Oh it was strategic!

When did Jesus show up on the shores to meet them? After a long night of catching nothing. After trying and failing. His timing was not a coincidence, it was planned with perfection.

Luke 5: 1-11 “One day as Jesus was preaching on the shore of the Sea of Galilee, great crowds pressed in on him to listen to the word of God. He noticed two empty boats at the water’s edge, for the fishermen had left them and were washing their nets. Stepping into one of the boats, Jesus asked Simon, its owner, to push it out into the water. So he sat in the boat and taught the crowds from there. When he had finished speaking, he said to Simon, “Now go out where it is deeper, and let down your nets to catch some fish.” “Master,” Simon replied, “we worked hard all last night and didn’t catch a thing. But if you say so, I’ll let the nets down again.” And this time their nets were so full of fish they began to tear! A shout for help brought their partners in the other boat, and soon both boats were filled with fish and on the verge of sinking. When Simon Peter realized what had happened, he fell to his knees before Jesus and said, “Oh, Lord, please leave me—I’m such a sinful man.” For he was awestruck by the number of fish they had caught, as were the others with him. His partners, James and John, the sons of Zebedee, were also amazed. Jesus replied to Simon, “Don’t be afraid! From now on you’ll be fishing for people!” And as soon as they landed, they left everything and followed Jesus.”

The difference for these fishermen was Jesus got in their boat. Lord Jesus, please come get in our boat! I don’t want to do this thing on my own. I don’t want to go my own way. My boat is available to you!

Now that Jesus was in their boat, they simply did the same thing they had been doing all night, they put their nets down. But this time they hauled in so many fish it nearly sank their boat.

And you know what, those fish were in the water all along. They were always there, the fisherman just couldn’t see them. And sister, whatever you’re looking for, it’s here. Your answer is here. Your breakthrough is here. The thing that will change everything is here. You just can’t give up on it. One more time, then one more time after that.

Que the Journey music “don’t stop believing!” Your faith will be tested here. Faith that is hope and assurance of what you do not see. So of course it makes sense that you still won’t see it, that’s how your faith is tested. Keep believing. Keep hoping. Keep knowing that it’s there. It’s possible. And one day, your ‘one more time’ will be successful.

Now, here’s what I love about the story of the fishermen with the catch of a lifetime … they were asked to walk away from it. Immediately after the best fishing of their entire lives, they’re asked to leave their boats, leave the nets, and leave the fish they had just celebrated over, and follow Jesus to their destiny.

I have to wonder if perhaps there were other fishermen who had been given the same invitation, but they couldn’t leave their catch. I wonder if some just couldn’t walk away from their boat. I wonder if some were so wrapped up in their identity as a fisherman, they never believed they could be anything else.

It takes a fisherman to believe there’s something in the water you can’t see, and keep fishing for it. It takes a disciple to catch what you’ve always wanted to catch, then walk away from it to follow Jesus to more. Jesus knew these guys were more than just fishermen, they were disciples. Their faith would cause them to haul in the catch of a lifetime, then walk away from it to step into a greater calling.

One day you will catch what you’ve been trying to catch. It will be glorious. You will be victorious. And maybe after you catch it, Jesus will ask you to follow him on to something more. And let me tell you, that will be hard. It will be hard, but it will be worth it. One day you will see with your own eyes the plans God has for you that he talks about in Jeremiah 29:11. You will see they were always plans to prosper you. They were always plans to fill your future with hope. But right now what he’s asking you to do is try again.

By Lonnie|November 24th, 2021|Categories: Devotionals, Podcast|Comments Off on 995 One More Time