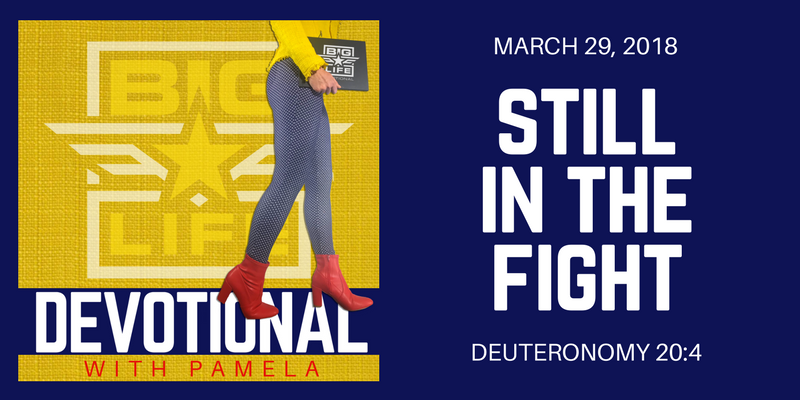 Deuteronomy 20:4 – For the LORD your God is the one who goes with you to fight for you against your enemies to give you victory.”

Whatever it is you are battling, may I remind you God is right there battling with you, fighting for you. But goodness gracious, sometimes it doesn’t feel like it, does it.

This week I’ve spoken to several women who feel totally and completely defeated. They are exhausted from the battle. Do you relate? Are you growing weary of the struggle. You probably thought at this stage of life you wouldn’t be going through THIS (whatever this is). There are some things recently in my own life that have just shocked the crapola right out of me too.

All good things come under attack. That’s just the name of the game. So you know what your struggle means my sister … it means you are a GOOD THING. Oh yes you are – you are a good, good thing.

AND GOD IS ON YOUR SIDE. He is for you, not against you. Whatever you are battling right now, please understand this … GOD WANTS TO GIVE YOU VICTORY IN THIS. Not temporary victory – not kindof almost victory – FULL and complete victory.

The enemy can’t permanently defeat you, so he tries to give you a defeated mindset. Those feelings of embarrassment, that’s where they come from. You know that feeling of, “I could never tell anyone my family has struggled with addictions, alcohol, drugs, pornography … aren’t those things only bad families face?

As a little girl I remember reading this poem at my grandma’s house over and over again to the point I have it almost memorized.

One night I dreamed a dream.
As I was walking along the beach with my Lord.
Across the dark sky flashed scenes from my life.
For each scene, I noticed two sets of footprints in the sand,
One belonging to me and one to my Lord.

After the last scene of my life flashed before me,
I looked back at the footprints in the sand.
I noticed that at many times along the path of my life,
especially at the very lowest and saddest times,
there was only one set of footprints.

This really troubled me, so I asked the Lord about it.
“Lord, you said once I decided to follow you,
You’d walk with me all the way.
But I noticed that during the saddest and most troublesome times of my life,
there was only one set of footprints.
I don’t understand why, when I needed You the most, You would leave me.”

He whispered, “My precious child, I love you and will never leave you
Never, ever, during your trials and testings.
When you saw only one set of footprints,
It was then that I carried you.”

Perhaps you are in the middle of one of those “saddest and most troublesome times” of your life. GOD IS CARRYING YOU. That’s how you keep getting up and getting dressed. When it makes no sense to be able to show up at work. When you didn’t imagine you would be able to have those difficult conversations, and yet you somehow did. You wanted to wrap your hands around his neck and choke him … and yet somehow you controlled yourself and walked away … yip, God is just carrying you.

Don’t live defeated. You’re still in the fight! For the LORD your God is the one who goes with you to fight for you against your enemies to give you victory.”

By Lonnie|March 29th, 2018|Categories: Devotionals, Podcast|Comments Off on 044 Still In The Fight