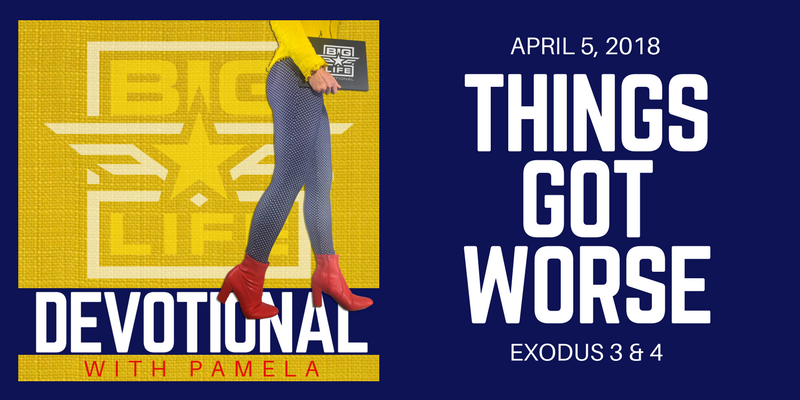 Today I will take you on a little journey through chapters 3 & 4 of Exodus. Oh I just know this will speak to you right where you are. Get ready, this one is for you. Yes, personally for you.

In Exodus chapter 3, God speaks and says he has heard the cry of his people and he is moved to help them. His people were the Israelites and they had been held as slaves in Egypt. God says he saw how miserable they were and he was concerned about them. Did you know God gets concerned about you? He sees what you are going through. He hears your prayers. He is moved by you. He wants you to know today that he sees you. He knows exactly where you are and he’s going to do something about it. Verse 8 says “so I have come down to rescue them.”

Ahhhhhh, this is a powerful lesson today, listen up. God comes down with his power to work and move by sending us. We are his hands and feet. When God wants to do something, he moves you. So now, go. I am sending you.

Wouldn’t we rather God just magically do something. Wouldn’t we rather him snap his fingers and change it all? I mean if I were God of the universe and this was my world, that’s the way I would have set it up. And you know what I would have on my hands? A bunch of ungrateful human beings who sat around and did nothing but complain waiting for their God to do everything. Maybe that’s why God doesn’t just say poof and fix our problems. He knows we would grow lazy. He knows we would be ungrateful. So instead he says, I’m coming down to rescue, but I’m coming down through YOU. So now, go. I am sending you.

And here’s where it starts getting good. Moses begins arguing with God. Wait God, you’ve got the wrong guy. Can’t you pick someone else? Who am I that you would choose me God?

But that wasn’t enough for Moses. Is it enough for you to know that God is with you? You do know that God is with you today. Whatever it is that you need to do today, whatever it is that you’re facing, you’re never alone. God is right there with you if you invite him. What I really love about God is he will not only be right beside you, but he will go before you at the same time. He will go in front to clear the way. And he will also go behind you. Oh yes, God’s got my back. He’s protecting me. And he’s protecting you. I like knowing I’m surrounded by God. I invite him into every car ride, every conversation, every meeting, every situation and he’s beside be, before me and behind me. I’m covered. Are you?

Moses says, okay God I know you’re with me, but what if the Israelites don’t listen to me? What if they don’t believe me. After all, I’m just plain old Moses here God. And oh it’s about to get good. He says Moses, what do you have in your hand? A staff. God says throw it on the ground. Moses throws down the staff and it turns into a snake. Moses is a’scared of snakes and he runs. Then he says Moses, put your hand inside your coat and take it out. He does and his hand became covered in leprosy.

Don’t you see, God just made things worse for Moses. What good he had in his hand he turned to a snake, then he gave him an illness. Why? Why did this happen to Moses? So that Moses would have a story. So when he went to speak to the Israelites he would have something to say. He would know the power of God. He would have proof of what God can do.

Could this be why some good things have turned bad right in front of you? Is God wanting to remind you of his power? Is he giving you a story? Could this be why you have been touched by illness or a struggle? Could it be because God is wanting to use you? He is wanting to work through you! And you have doubted who you are. You have doubted being good enough for the job. So God is showing you personally what he can do.

You see, when you have God touch your own life. When you see him work up close and personal, you then have the courage to do exactly what he tells you to do. When you personally know the power of God because you’ve seen it with your own eyes, you will tell the whole world about your God.

God has heard you. He sees you. And he’s coming down to do something about it. But remember, he chooses ordinary people to do his work. Look around you today, he’s working on your behalf through ordinary people like Moses who have had something powerful happen in their lives.

By Lonnie|April 5th, 2018|Categories: Devotionals, Podcast|Comments Off on 049 Things Got Worse