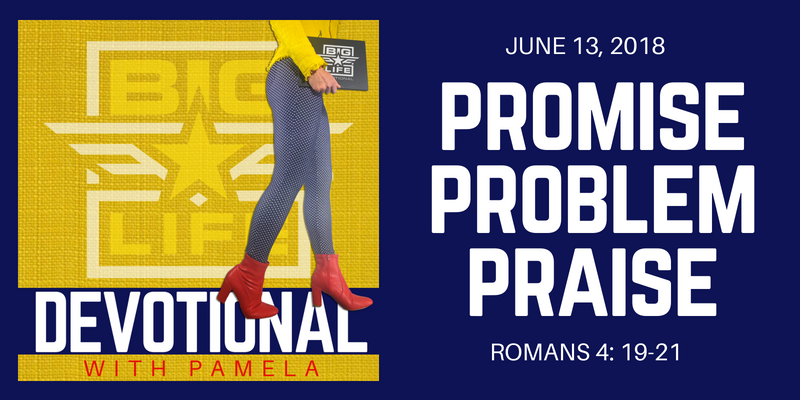 Yesterday I was on my knees praying for a friend. I was praying over her job interview asking for God to grant her favor in the eyes of those making the decisions and go before her to provide. As I was praying I felt moved to instead thank God for what he was already doing. It was already done. The provision was already there. The way was already made. He was already at work and favor was in action. God just wanted me to thank him for it because he already had the details taken care of.

What if we started not only praying this way with such assurance of God’s goodness, but we started living this way? We woke up with deep gratitude because we KNOW God has gone before us. We know that God’s good plans are unfolding.

You remember the story of Abraham, right? The man whom God had given a promise to create nations from him, yet he and his wife Sarah couldn’t have children. How incredibly frustrating. It must have felt like God was dangling this promise in front of him and yet made it impossible for 100 years. Maybe you’ve felt that way. There was a time you heard from God. He planted a seed within you, a promise of something in your future … and then nothing. Your eyes see no proof of change. The dream is still out of reach. So you’re left questioning yourself, wondering if there’s something wrong with you. Don’t you know Abraham must have felt the same way? You’re even left questioning God. God you said you would provide – you promised you would – yet nothing. I’ve got nothing here. What do you do when the proof doesn’t match your promise? You praise.

The promise: God promised Abraham he would be a father.
The proof was Abraham’s problem. He is a hundred years old, he’s now impotent and his wife is barren and we’re at the point of impossible.

There was a big gap between the promise and the proof. So what is the answer? PRAISE!

Romans 4: 19-21 “Without weakening in his faith, he faced the fact that his body was as good as dead—since he was about a hundred years old—and that Sarah’s womb was also dead. Yet he did not waver through unbelief regarding the promise of God, but was strengthened in his faith and gave glory to God, being fully persuaded that God had power to do what he had promised.”

He gave glory to God. Abraham praised God even when the proof didn’t match the promise. He had a problem instead. He was fully persuaded that God had the power to do exactly what he said he would do. Do you truly believe with every ounce of you that God can fulfill his promise in your life? Do you fully believe that he can use everything for good? Do you know down deep within your soul that he is for you and not against you? Do you know you can do all things through Christ Jesus? Do you know your impossible is possible with God?

Your faith will strengthen you. It will carry you through those days when the proof doesn’t align with his promises. Your praise will supercharge your prayers.

Your praise causes you to focus on his promise instead of your problem. Your praise calls God to action. He simply can’t resist your gratitude. His power is multiplied in your praise. I’m throwing around P words like a gangster this morning! God gave you a promise. And then there’s the proof of your problem all up in your face. Praise him any way and receive his power.

When you say thank you under these circumstances, you’re telling God, “hey, I trust you so much and I’m so darn sure you are who you say you are and you can do what you say you can do, I’m going to thank you right now for what you’re going to do tomorrow.”

What do you need to thank God for today? What PROMISE appears more as a PROBLEM in your life today with no PROOF of God’s PROVISION? Call his POWER to action with your PRAISE.

Be specific. Of course God will accept your simple thank you. But what he really wants is your specific praise. He wants the details. Face your facts, stare down your reality and say God, I may not see you at work here but I know that I know that I know you are working on my behalf. You are making a way. You are doing things I can’t see and can’t even imagine for me. You are creating a miracle that I’m going to run head on with, and before I do, I will praise you. Thank you for what you are doing. Thank you for following through on your promise. I will not waiver in my faith. I will praise you until you show up and then I’ll praise you some more!