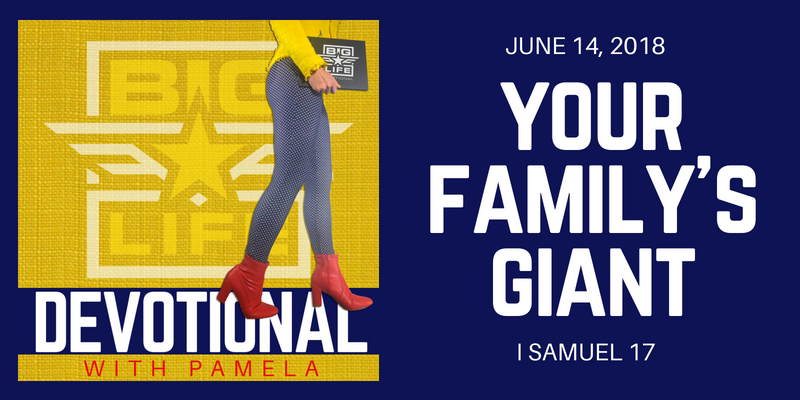 We all have giants we battle. A weakness, a shortcoming, an area of struggle which has created a scenario where you can’t seem to win. Where is it you battle but never win? Where have you fought time and time again to make things different, and although sometimes you’ll have a bit of success, ultimately you end up right where you started. Stuck. And this struggle in your life represents your giant.

I’m here to remind you this morning you’re a giant slayer. You’re just the person to bring that giant down, conqueror it once and for all, and change all the rest of the days of your life. You can go from where you are to where you’ve always wanted to be when you slay that giant.

David was a little Shepard boy. In the book of I Samuel in chapter 17, we read his story. David’s entire family saw him as insignificant, but God created him to be a giant slayer. His brothers were all soldiers and he was just the lunch boy. Now you know how the story goes, David brings lunch to his brothers who are on the front lines of battle and there he meets his giant Goliath. A towering, beast of a man looking for someone to fight. David says “I’ll do it.”

When will you step up to the plate and say “I’ll do it. I’ll fight this battle. I will stare down the problem and I will fight.” What we often do is we just keep ourselves busy and distracted, avoiding our giant. That’s what David’s brothers and the rest of the army were doing. For 40 days they faced their giant and no one tried a thing. They were convinced they were outmatched and incapable of defeating Goliath. And so they sat there, looking at each other.

Sometimes this is exactly what our families do. We just sit there looking at each other. We feel outmatched by our problems and overwhelmed by the enormity of it all, so we sit there, stuck. Well someone in your family has to stand up and say THIS IS NOT ACCEPTABLE. We won’t live like this. The enemy will not win here. And that someone likely needs to be you.

What has been threatening your family? What giant has terrorized your house? Are you going to let this continue?

And just the same, God has been equipping you and preparing you for your battle. That’s why the struggle has been permitted in your life. That’s why it’s been harder and taken longer than you ever imagined … because you have been gaining strength. You have learned you are more capable than you ever gave yourself credit for. You’ve been tapping into what God put down deep in you. It was all for a purpose.

Now here you are today, ready for battle. And what will you use to fight?

What did David use to defeat Goliath? Did he use his brother’s weapons? Did he layer up in armor which wasn’t his? No. He refused all of that. He knew exactly who he was and how God had prepared him was enough. He didn’t need anything other than what God had given him.

Everyone around you may be trying to hold you back. They may try to convince you it will never work. They may insist you wait, you gather more, you do it their way. But what you have and who you are is exactly what God is going to use. Your giant will fall because of what YOU have.

David takes off the heavy armor. He refuses the sword and shield and he grabs 5 small stones for his slingshot. With boldness and courage that left everyone else in shock, David took down that giant and was victorious.

You too will take down your giant and stand victorious, and you will do it with what you already have. YOU ARE ENOUGH. God has equipped you better than you even know. Listen to me, you’ve got this. That overwhelming situation, that continual problem, the battle you’ve been fighting for so darn long, the threat that has terrorized your family and overturned your household … well now is your time to step up and declare “this is going down!”

It’s no mistake you’re hearing this today. Today you remember YOU ARE ENOUGH. You have been equipped. Nothing in your past has been wasted. You’re ready to fight this. God is going before you in this battle and will give you victory.

By Lonnie|June 14th, 2018|Categories: Devotionals, Podcast|Comments Off on 099 Your Family’s Giant