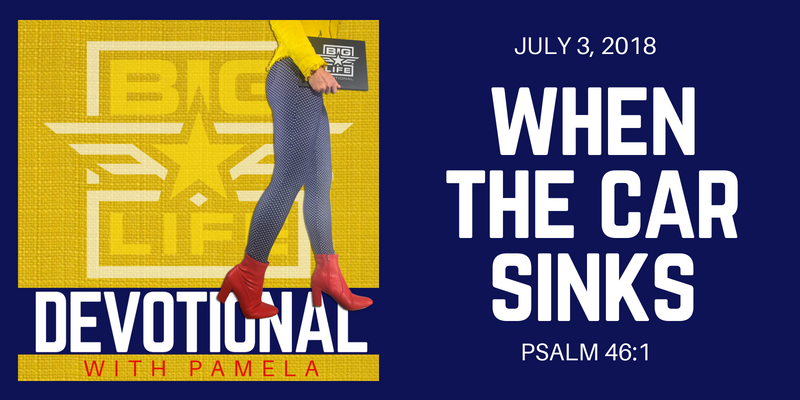 How exactly do you put into words witnessing the power of God at work to not only save a life, but rescue a life from anything that falls short of the potential he placed within that person?

I’m in the business of helping people change their lives. You want to lose weight, you want to achieve a lifetime goal, you want to improve your marriage, you want to start a business, you want to find your purpose … well, that’s what I do. I simply help people tap into what’s already inside of them and dare to go for it. But what God does is he not only places that potential inside of us, but he orchestrates every event in our lives to bring us to a place where we come face to face with his power and relentless love.

But he doesn’t stop there …

Our relentless God who loves us wildly not only orchestrates events in our lives, but he takes every ounce of harm, every bad decision, every step in the wrong direction and uses it for a full on collision into HIM. When we run, he chases. He comes after us, rearranging and aligning whatever it will take and whoever it requires to get to you.

Has God gotten to you? Have you collided with his mercy and grace? Or are you still convinced he’s mad? Are you not even sure he’s real? That’s understandable. And I’m really glad you’re listening. THIS IS NOT BY ACCIDENT.

Yesterday morning shortly after hosting the devotional podcast, my husband Lonnie (who is now being labeled as the “Army Veteran Hero”) and I went to the lake to practice flying and videoing with our new drone. That’s completely out of our normal routine, in fact this was our first time ever going to the lake at that time of day. It was an odd shake up to our routine, and it was about to become one unforgettable Monday morning.

As we’re standing on the remote shore of the lake, an area where no one was in sight, we hear a loud crash and see a car plunging head first off the bridge into the other side of the lake. God puts a survival mechanism in each of us. You don’t think, you just do. Every show you’ve ever seen on TV with a sinking car comes flooding into your mind and whether you know it or not, you’re equipped to be the right person in the right place.

The front end of the car was fully submerged almost immediately and what I saw next was straight out of every mom’s worst nightmare. A frantic mom in the backseat of the car trying to unbuckle her 18 month old baby girl from her car seat as the car is sinking. She couldn’t open the doors to the car because of the pressure from the water, but moments before the power would go out, she though to roll down the window.

She thinks she is alone. She believes her cries for help are unheard. She was wrong. God was in every detail. It was him who kept the car from flipping onto it’s roof as it likely should have, going down such a steep embankment. It was him who had rearranged our morning routine to be right there at that moment. His fingerprints were all over this.

Oh how his fingerprints are all over your life too. All over your current situation or head on collision. You may think you’re alone, but all you need to do is call out for help. He’s been trying to help you for YEARS. Now is the time to let him.

Psalm 46: 1 says “God is our refuge and strength, always ready to help in times of trouble.”

He’s always ready. That means right now he is ready to help you. Are you in trouble, he is right beside you.

What happened next is what I believe any good human being would do. My husband jumped into the water, swam to the car, kept the mama calm so he could grab the baby through the window, helped the mama climb out as well and swam them to shore. About 20 seconds later, the entire car was overcome with water and sank out of sight.

We had just witnessed a miracle in front of us. But this wasn’t just about a saved life, this was about a new life. God’s in the business of washing away the old and making it new. A holy baptism in the water of Norfork lake had just occurred, and oh … there was a sinking car too.

The mama shares with me how she had been on the wrong path in life, making all the wrong decisions in all the wrong relationships, wrecking her life until nothing was left. She had been living in her car and everything she owned was now at the bottom of the lake. Except for what was most important. She and her baby were unscratched. They were wet, but it was hot anyway and they were already in their swimsuits.

I asked her if she believed in God. She said no. Then after a pause, she said, but I think I do now.

This is all the result of a relentless God who will pursue us through every bad decision, every wrong turn, every misstep, and wait out every delay to get to us. There is NOTHING he won’t do to prove his love for you.

Sitting in front of me was a woman who God loves wildly. A woman who he had his eye on all along. A woman he had been pursuing because the potential he had placed within her had gone untapped and the life he had in mind for her was going unlived.

Isn’t this our story too? Isn’t this your story? A beautiful life being sometimes spent going in the wrong direction and a relentless God who chases you down. A story of thinking you’re alone, then finding out you were never alone for one moment. A story of undeserved, unearned, overwhelming, reckless love lavished on your by your creator in moments of miraculous intervention, most of which you never even see.

Life changes in a moment. We sink in a moment. We are saved in a moment. This is a moment of your life where God is pursuing you. Now maybe you already know his grace and mercy today, you already know him as your savior, but have you been living up to your potential? Have you stepped fully into the life he has available to you? God not only chases you for your salvation, but he chases you for exactly what he created you for. And if you’re in a car heading in a direction that’s anything less than his best, he doesn’t mind letting it sink. He’s okay with you getting a little wet.

He has the power to turn your tragedy into part of your destiny. Your story is in the making. Let him catch you. Let him save you in every way. Let him guide you to a life that will blow your mind. Let him rearrange your schedule. Let him interrupt your plans. Let him right your wrongs.

Will your life magically change in one decision? Oh, girl, there’s work to be done. God doesn’t do lottery tickets. He does second chances and third and fourth. He does hard work and better choices.

None of us are doing this thing right all the time. We’re all flawed and failing. God doesn’t look at a single one of us as more righteous than another. Not one. His love for you is unmatched. You couldn’t earn it, therefore there’s nothing you’ve done that has disqualified you from him saving you. The car may be sinking, but my friend you’re going to come out of this with a new life.

By Lonnie|July 3rd, 2018|Categories: Devotionals, Podcast|Comments Off on 112 When the Car Sinks