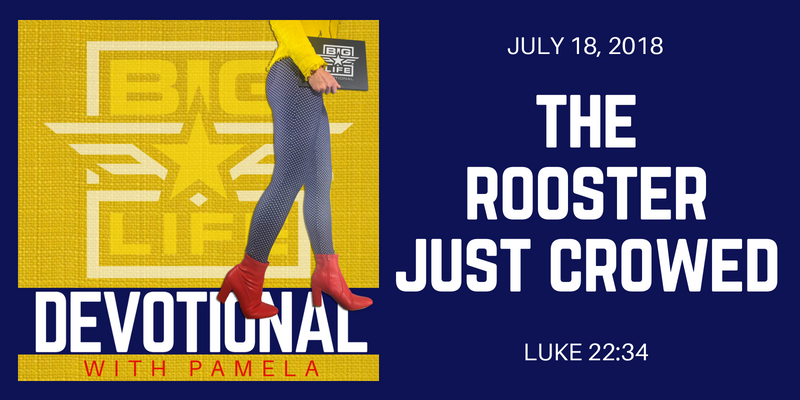 Today we’re digging into the story of my favorite disciple. The one whom I most identify with. The one quick to speak, first to get up and go, and first in line to create a big ol’ mess as a result. Maybe you identify with him as well.

Peter is characterized as strong willed and courageous; however dangerously impulsive. Anyone else here ever gotten themselves in trouble because they speak before they really think about what’s about to come out of their mouth? Have you ever wanted to somehow just suck your own words right back up, rewind time by a few minutes, and think again before you speak?

That was Peter. Quick to show up, quick to volunteer. Eager to get to work and make things happen, and sure to make a mess. But Jesus loved him. As we dig into the most infamous part of Peter’s story, let us all remember this … Jesus chose imperfect Peter, hand selected him as one of his 12 disciples, his best friends who he would live with and personally teach. He knew all the great and noble things about Peter and his greatest faults when he chose him, yet he chose him any way. He not only chose Peter, but he chose him first.

So here we are at the end of Jesus’ ministry. Peter and the other disciples have witnessed Jesus do the impossible. They knew he was truly the son of God – he was the savior of the world – they had no doubt of that. They saw him raise the dead, they witnessed him heal a blind man and a crippled man. They were there when he turned water into wine and cast out demons into a herd of pigs. And now Jesus had gathered these men whom he would leave his ministry to and prepared them for what was to come.

Let’s put it this way – things were about to get bad, real bad. Jesus is preparing his best friends for his crucifixion.
Peter, the quick to speak and impulsive quickly stands up next to Jesus and says, “Lord I am ready to go with you, both to prison and to death.”

And in Luke 22:34 – But Jesus said, “Peter, let me tell you something. Before the rooster crows tomorrow morning, you will deny three times that you even know me.”

Can you imagine being Peter in this moment? Called out in front of everyone. I’ve always read this scripture and the story that follows of Peter straight up denying Jesus 3 times that night and thought, shame on you Peter – how could you do that? You were warned and yet did it any way. Not only once, not even twice, but you did it 3 times! And then sure enough, just as Jesus said it would, the rooster crowed. Oh come on now dude – pull your head out.

To me, it was always just a story of the downfall and shame of Peter – never was it anything to be applied to my life. But what if this is a story included in scriptures because it does apply to us? What if we can learn from Peter’s mistake?

I’ve always believed I would never deny Jesus. If a gun was pointed to my head and I was told if I confessed the name of Jesus they would pull the trigger, I would still claim Jesus. So, quite honestly it’s been easy to put myself on some sort of “holier than thou” pedestal saying I would never do what Peter did.

But what if we have denied Jesus? What if the rooster has crowed on us too?

What if I have denied him and you have too?

I have a few thoughts on that. When we take credit for our talent, our job well done, our own success, thinking so well of our selves – aren’t we denying God? I mean HE is the one who gave you that talent. He is the one who has made it even possible for you to do what you do. Anything that is good about you is simply the result of a loving creator who has shown his favor.

So in essence, when we are puffed up taking the credit, we are denying the one who is truly worthy of the credit. Oppps, the rooster just crowed.

Now, God isn’t interested in our cheap words. This isn’t about responding to every compliment with a canned response of “to God be the glory.” No, this isn’t about your response at all. It’s about your heart. DO YOU KNOW EVERYTHING GOOD IN YOUR LIFE – EVERY TALENT YOU HAVE – EVERY SUCCESS YOU ENJOY – IS A DIRECT RESULT OF GOD’S BLESSING ON YOU? Do you know it? Do you live like it? Do you think like it?

It’s not about our canned responses – it’s what is inside of us. Let us stop denying God of the credit he deserves. Acknowledge his gifts, his blessings, his undeniable favor upon your life every moment of your day with a sheer awareness. It’s so easy to be busy and distracted and fail to live in awareness today. But we can try to get better. We can strive to give God the credit he deserves and see his hand at work in everything.

Don’t you know your lack of confidence and low self-esteem burdens your creator and savior? You were made to be more. Stop denying your true identity in Christ.

You are valuable beyond measure. Your worth is unmatched. Even with your past and your mistakes, God looks at you and sees his most beloved daughter who he has the BEST plans for. If you’ll start believing that and stop denying him, changing will begin happening in your life from the inside out. No more superficial, short lived changes. No more getting your hopes up and then being let down. When you get your value and worth in alignment with your true identity in Christ, all things change. This is where it starts.

By Lonnie|July 18th, 2018|Categories: Devotionals, Podcast|Comments Off on 123 The Rooster Crowed