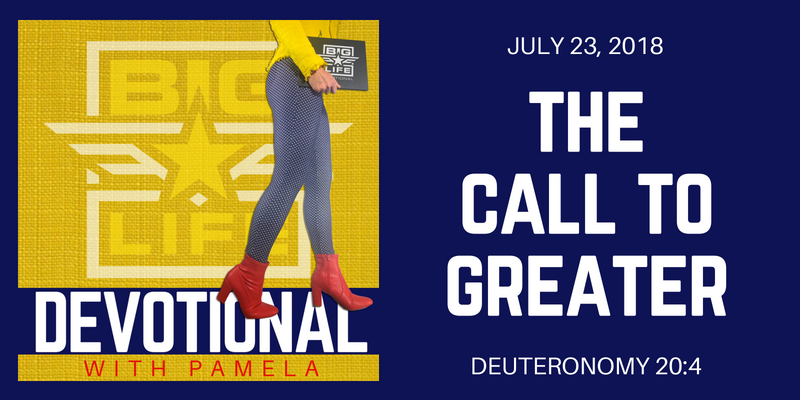 What would happen in your life if you showed up? Really, what would be possible if you started showing up every day with all you can do in your own life?

When will you stop walking away and instead step up?
You’re beginning to receive the calling on your life. Oh yes you are. You’re listening today by great design because God wants you to hear him loud and clear. GOD IS CALLING YOU TO BE GREATER. He has been preparing you for a bigger purpose and next level of living, and my sister it’s time to step into it. You can’t stay where you are when God has called you to be greater.

Throughout scripture we see how God prepares one person through their life experiences, then they break through to the next level where they show up and begin living as the person they were created to be, fulfilling their purpose. Look at David. The little Shepard boy who was too young and too little to be in the Army like his brothers. But he was chosen to fight the giant Goliath and he won. What did David have to do? He had to show up. The battle had already been won. God had already provided a way. The way seemed rather unimpressive, just a sling shot and 5 smooth stones, but that’s all it took. David showed up and used what God provided, and the victory was his.

How many times do we miss the answer to our very prayers because the answers seem too ordinary. We’re looking for the magical and mysterious answer when God is saying, “here’s 5 rocks … throw them!”

Time and time again, we already have what we need to break through whatever is holding us back, but we miss it because we believe big problems require big solutions. Understand this, big problems require a big God. The good news is, we’ve got that. Not only do we have a great big, powerful God, but he is on our side. The battle has already been won, God’s just been waiting on you to show up.

Deuteronomy 20:4 says “For the LORD your God is the one who goes with you to fight for you against your enemies to give you victory.”

Maybe you feel this scripture doesn’t apply to you. Maybe you don’t have very many enemies lined up with weapons ready to fight you on this Monday morning? Maybe you didn’t wake up this morning preparing for battle.

But maybe you should have.

You are in a war. Every day of your life there’s a battle over your potential and your purpose. Every day obstacles are put in your way to detour you from the plan for your life. Today God is calling you to be greater and that means you can’t stay where you are and keep doing what you’ve been doing. You have to step up. You have to drop the excuses and show up today. God wants to give you victory, but the victory will always be out of reach when you aren’t even reaching for it!

That little Shepard boy David who defeated the giant Goliath with those 5 stones later becomes King David living in a palace. Power and position was his. But first he was faithful in the pasture. First he slept with the sheep. First he just showed up. We all want the palace, but are you first willing to be faithful in the pasture? All his life, God was calling David to be greater. It didn’t happen overnight and there were many battles along the way. But all he had to do was keep showing up because God had already provided the victory.

The same is true for you. God is taking you somewhere, but to get there you will go through many battles. The victory is yours if you will keep being faithful and show up.

By Lonnie|July 23rd, 2018|Categories: Devotionals, Podcast|Comments Off on 126 Call To Greater