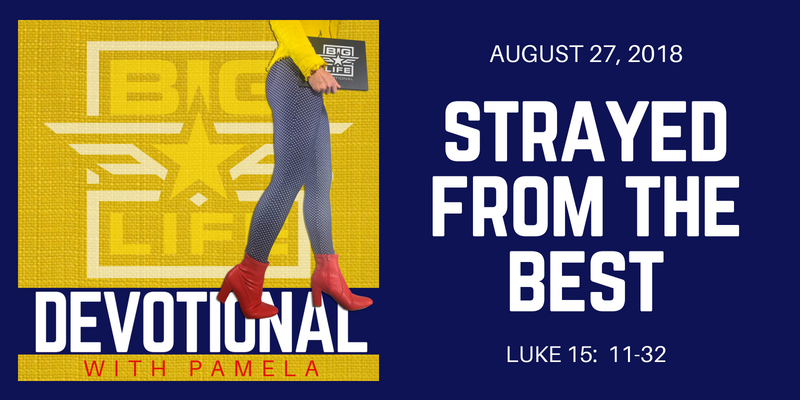 The story of the prodigal son tells of a son who betrayed his family, left home and got on the wrong path. Greed got the best of him. Wild living got the best of him. Maybe you can relate, but you probably can’t. Unless you’re one of the fortunate few who has royally screwed up their life then found their way back, then this story is for someone else.

You – well you haven’t ever made that huge, epic bad decision that made the 10 o’clock news. You’ve never been the disgrace of your family. You’ve never landed yourself face down in a pig pen like the prodigal son. And it’s about this time we get all puffed up in our pride and self-righteouness and declare we’re doing pretty darn good with our lives.

Ahhhhh, but wait. Isn’t the story of the prodigal son also about a child who strayed from the best? Isn’t this a story about someone who opted for instant gratification and paid a high price later. Oh yes, this is a story about us!

The story of you and I, the ones who have strayed from the best is found in Luke chapter 15, verses 11-32. Reading from The Message translation Jesus says:

“There was once a man who had two sons. The younger said to his father, ‘Father, I want right now what’s coming to me. So the father divided the property between them. It wasn’t long before the younger son packed his bags and left for a distant country. There, undisciplined and dissipated, he wasted everything he had.”

And stop right there. I totally see me in this story. Do you see you? What gets us in trouble here is the “I want RIGHT NOW!” I want what I want and I want it right now. But typically what we can have right now is just a cheap imitation or a a slighted version of what would be available to us later if we stuck with it.

You can have it all, but you can’t have it all at once. How many times have you traded the greatness you could have in future for the taste of goodness you could have right now? And for many of us, it’s literally the TASTE we can have right now. So many of us have goals to be healthy. And it’s no big mystery, we know what we should and shouldn’t be doing. Oh we know, but we see what we want right now and we’re shoving our face in a bowl of something that goes directly against our goals. And then what happens … we regret it.

Regret is a high price to pay for that little piece of immediate gratification.

How many times have you bought something and regretted it? Our impulses get us in trouble, and in debt. The average American is in over their head in credit card debt, and you know what got them there … $20 here and $20 there. After one year we couldn’t even tell you what we bought, but we have a maxed out credit card with a minimum payment that’s eating us alive.

And this is a story of how we stray from the best.

Undisciplined – lacking in self control. Is this you? You know what you should do, but you simply aren’t doing it. You lack focus and follow through. You start strong and fizzle fast. You want it, you want it now and you lack the discipline to stay the course to earn it. Who am I talking to today? Is this you? Isn’t it all of us? Of course it is, that’s why Jesus shared the story of the prodigal son with us in the Bible, because he knew one day we too would stray from the best in exchange for what we could have right now and we would need to know how to find our way back.

Dissipated. Yes, that’s what scripture calls the prodigal son. He was undisciplined and dissipated. What does that mean? It means he over indulged. He used it all in a foolish way. God is speaking directly to us this morning with a gentle tap on our heart and saying, “my daughter, you have over indulged. Reign it back in.” He has given us so much and we have used it in foolish ways.

We have strayed from the best. The best is available to us. It always has been. And here’s the thing, regardless of how far you’ve strayed and how long you’ve been straying, the best is still available to you. You can have it all, you just can’t have it all at once.

Gather around prodigal daughters, the story ends well. The son hits his rock bottom, and this rock bottom is a good place. Sometimes God lets you hit rock bottom so you will discover that he is the rock at the bottom. And then he rebuilds you on that solid rock. He’s not done with you yet.

The father of the prodigal son was always waiting for him to return. Even when he knew he had wasted it all. He was waiting.

By Lonnie|August 27th, 2018|Categories: Devotionals, Podcast|Comments Off on 151 Strayed From the Best