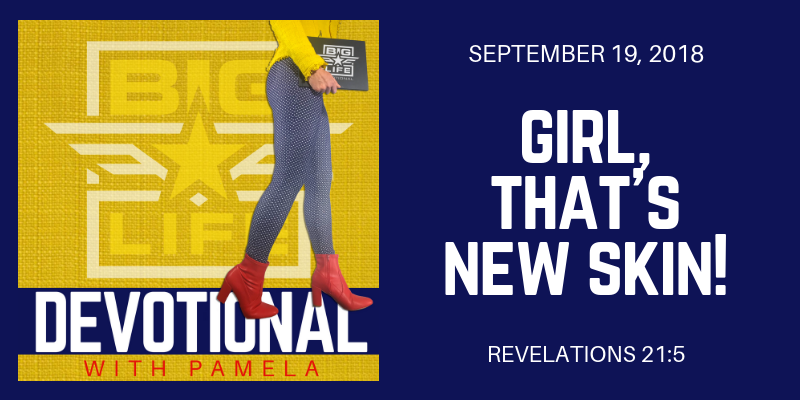 Revelation 21:5 – He who was seated on the throne said, “I am making everything new!” Then he said, “Write this down, for these words are trustworthy and true.”

You are not the same person you used to be. Literally you are new. Your colon cells are new since this past Saturday. Your white blood cells are all new since last year at this time. Even your skeleton isn’t the same as it was in 2008. Yes, to your bones you are a new person. And your skin, well that’s new since mid August. You’re walking around in a whole new skin, so listen to me …. you’re totally not stuck in any of your old habits and patterns. You’re a new person and God wants to do a new thing in you. Isaiah 43:19 says “See, I am doing a new thing.”

Won’t you believe that God has been working on you to take away the old and create new within you? You don’t have to be the same person you were last year. You don’t have to be stuck in the same old habits and routines that held you back in the past. You don’t even have the same skin as you did back then. Won’t you embrace the new, lean into what could be and trust that you can change anything you want to change about you.

Recently I was chatting with Kim. Kim shared with me her never ending battle with the snooze button. She told me she is a sound sleeper and can sleep right through the alarm without even knowing it, so she’s constantly running late and never has time for that morning workout. Do you have a similar problem? Well, let me help you write a new story. You sleep through your alarm because your old story said you could. You don’t hear the alarm because you have told yourself that you CAN sleep through it. Here’s how I know. If you had your alarm set for 5 am to catch a flight for an exotic beach vacation complete with fruity drinks and cabana boys, you wouldn’t sleep through that alarm now would you? The first sound of that alarm you would pop out of bed. Why? Because it’s important to you! All you did was tell yourself a different story. No sleeping through the alarm on the morning of your flight to vacation because darn it, you told yourself this was important, and so you were able to get up with ease. Oh how a changed story changes everything.

Could change really be that easy? Yes it could be. God is already working in you to do something new, just partner with him and change any story that’s no longer serving you. You are an intelligent, strong woman who follows through with her commitments, wakes up on time, does what she says she will do with her very best effort. Maybe that’s not who you were last year or even last month, but the good news is, you have new skin since then.

Offer yourself some grace and write that new story about yourself. Who are you and how do you live your life? This month in BIG Life Mentoring I’m helping 300 women rewrite their story to say:

They have memorized those 3 lines. They’re surrounded by post-it notes everywhere with this new story. They’re repeating it several times daily. And as a result, they’re beginning to believe this new story and their actions are lining up. They’re showing up more. They’re pushing for more. They’re experiencing more. And it all began with the story they tell themselves. Change your story to align with the new thing God is doing in your life. Your new skin deserves a new story to match it!

And remember this, the same is true for your spouse and your children. God is making them new too. Offer them the clean slate and fresh start. Believe they can change. Partner with God in what he is wanting to do in their lives. They too have new skin. They’re not the same person. Give them an opportunity to prove that. My friend Holly has a son in his early 20’s. He was a good boy who went down the wrong path and became a drug addict. His chances were running out and he landed in a rehab facility. And then he left the rehab refusing treatment. Holly reached out to me in a panic and we began praying. We prayed God would help him change his story. We prayed he would stop him around in his tracks and make him physically turn around in that moment and return to rehab. And he did. He walked back in that rehab he had walked out of and truly sought treatment. God gave him a new story with his new skin and everything in his life radically changed. He’s not only clean, but he now helps run the rehab which saved his life. He was on a stage this past Sunday preaching God’s word and sharing his story.

That’s what God can do. God can take the most hopeless of situations and use it for good. He can change everything. EVERYTHING. It may not seem likely and it may look hopeless, but choose to have faith that God can make you new and he can make them new too.

God is making everything new. Welcome that truth. You can trust it. Let this be your story. Anything about you in the past that no longer serves you can change.