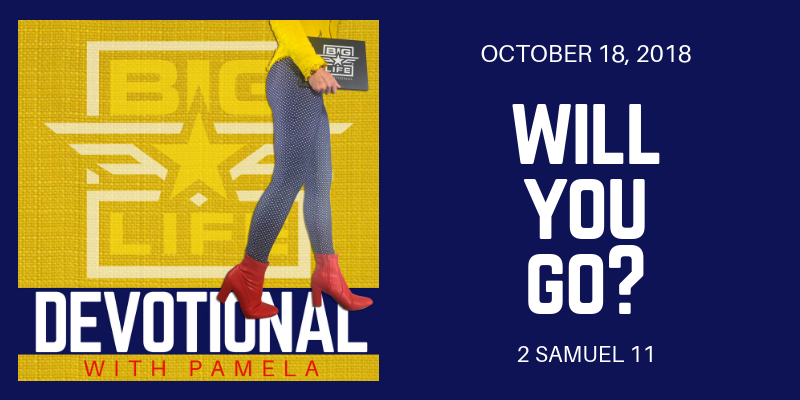 That willingness in you that God so loves has grown a little dim, hasn’t it? You’re now too busy. There’s too much stress and pressure in your real life to listen to God’s prompting and just go. Our attitude of “choose me God, I will go” has turned into a “oh, please not me, I’m so busy.” We hunker low, hoping God will skim right over us and choose someone else for the work he has. But have we forgotten our willingness to go creates an undeniable favor over our lives and supernatural provision? Have we forgotten our unwillingness to go leaves the door open for the enemy to creep in and do his nasty stirring?

Is that you this morning? You once had so much passion in you. You woke up at the first sound of the alarm ready to conquer the day … and now … not so much. You’ve gotten lazy and lax. Oh we can layer it with all kinds of flowery excuses that the outside world will buy, but deep down you know it’s still just an excuse of why you’re not doing what you know you should be doing.

When you lose your willingness to go, it too will create a huge mess in your life.

Many, many years ago, my husband had worked hard and built a very successful business in Dallas. Just when the money was flowing in and the car was fancy, we felt God telling us to move to the desert. But we didn’t want to move to the desert. We didn’t want to leave behind what we had worked so hard to build. But out of faith, we went. I had envisioned immediate success once we moved. Isn’t that the way God works? Your willingness is immediately met with luxury and riches. Wow, I was wrong. Our willingness to go was met with hardship and rejection. Rebuilding our business was slow and miserable. We went from the mountaintop to some dark valleys. I was sorely disappointed in God’s crapy plan quite honestly. He took us away from our success to the desert to struggle? But what I didn’t know was God was lining up something so much more than business success for us. Our willingness to go had brought us exactly where we needed to be, just not for the reasons we imagined. You see, just a few miles from our new home in the desert, across the border into Mexico were two little girls in an orphanage. We were lead there to find them. We were lead there because God had a tremendous blessing in store for us for all the days of our lives. Gosh, what if we wouldn’t have been willing to give up what we had in Dallas to follow him to the desert? We would have never known what God had waiting for us. We would have missed it.

By Lonnie|October 18th, 2018|Categories: Devotionals, Podcast|Comments Off on 189 Will You Go?