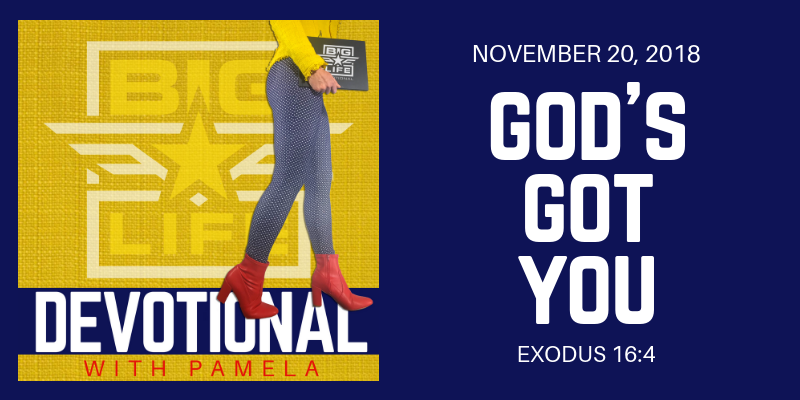 Let me set the stage for today’s devotional. In the book of Exodus we read about the Israelites being freed from captivity in Egypt by Moses. They were on a journey to the Promised Land, but to get from where they were to where they were going, they had to go through the wilderness. Isn’t the same true for us? To get from where you were to where you are going, it is a wilderness, a desolate land with the unknown and it’s not always easy.

Maybe you’re trying to lose weight. You left 260 pounds and you’re heading to 160, but this journey isn’t easy. In the beginning you’re like the Israelites leaving Egypt all excited saying “woohoooo we’re going on a roadtrip, we’re finally on our way. This is exciting! We’re doing it for real this time!” And shortly into the journey you realize this kinda sucks. You know if you keep going you will reach the land of 160 pounds, but nobody told you how tough it would be between 260 and 160. Maybe like the Israelites, you hate the journey so much that you almost wish you could go back to where you were. At least back there you weren’t starving. Maybe that’s what you have done in the past. You gave up on the journey and you went back to the bondage of being unhealthy and overweight because you hated the wilderness in between so badly.

Or maybe it’s not about health and weight for you. I help people discover their passion and their purpose and often that means leaving the security of a regular paycheck and creating something. For most in the beginning it’s exciting, but on the 2nd month with no paycheck it seems the days of punching the clock at that miserable job were much better than the uncertainty of following your passion. It’s scary out here in the land of the unknown. How many of us will tuck our tail between our legs and hightail it back to where we were and forfeit where we were trying to go?

That was the Israelites. They were miserable on their journey through the wilderness. They had left where they were, they were heading to the promised land, but the land in between of the wilderness is where they had no food. Scripture says they wished they would have never left Egypt. Although they were slaves back there, at least they weren’t starving.

It’s easy to feel that way in the wilderness, the place between where you were and where you are going. The place between blowing and going, and racking up the debt … and living completely debt free. Where are my girls at who have decided to be financially fierce and become debt free? You remember the days of walking in the store and buying it because you wanted it and just charging it. You were in bondage back then, but at least you got what you wanted. Now here you are in the wilderness and you’re growing tired of saying no. You just want to shop and eat out and go to the movies. But no, you’re saving money and it’s just plain ol’ no fun. And then you think, oh my gosh, I have 5 more years of this! Yeah, that’s what the wilderness in between where you were and where you’re going looks like.

So what do you do when the journey from where you were to where you want to be seems too long? Will you give up and will you go back to where you were? Or will you trust God on this journey through the wilderness. Look what God did to provide for his people and know he will do the same for you as you go. On their journey to the promised land there was nothing but wilderness. It was dry desolate ground. There were no plentiful gardens along the way. There were no meat markets. There were no fruit tress. There were no WalMart supercenters. There was nothing. And the Israelites had nothing. They were traveling on foot, and had ran out of the food they had packed. They were starving traveling from where they were to where they were going.

And here we pick up in Exodus chapter 16 verse 4, “Then the Lord said to Moses, “Look, I’m going to rain down food from heaven for you. Each day the people can go out and pick up as much food as they need for that day. I will test them in this to see whether or not they will follow my instructions.”

And so it was every morning, sweet bread called manna fell from the sky onto the ground. And I’m not talking about a little bit of sweet bread, there was enough for everyone to eat. I did a bit of research and I realize I’ve always had the visual of this story wrong in my head. I always imagined a group of about 100 people out collecting bread which fell from heaven, no, there were a million or more people. That’s a lot of sweet bread raining down from heaven!

Can you imagine the surprise? The bread must have tasted so good to them, after all, they were starving. Now here’s the magic of this story and the lesson for you and I today. God said go out and pick up as much food as you need for THAT day. He was testing them. He only gave them what they needed for that day. Remember “give us THIS day our daily bread.” If they worried about tomorrow and focused on what they would need the next day, it would all rot and be covered with maggots. God gave them exactly what they needed for that day and they had to trust him again for tomorrow’s provision.

Now maybe you’re not counting on God for sweat bread today, but maybe you’re counting on him for willpower and strength today. Maybe you’re counting on him for provision. And he will give you what you need FOR TODAY. But he likely won’t give you what you need for tomorrow and next week on today. I wonder how much of the journey you are on is simply a lesson in trusting God with today … and we fail when we worry about tomorrow. We fail when we worry about what’s coming next week and next month. We look forward a couple months and we worry. We talk to God about what’s coming next year and claim there’s no way. We flip out because we’re worried about what’s coming and how we will make it through. All while missing the fact that what we have for today is enough.

I can’t tell you how many people are blowing their healthy plan today because Thanksgiving is on Thursday. In our minds we’re like what’s the point? If the irresistible feast is coming, and you know you’re going to blow it, then being good today has no value. WRONG! Stop worrying about Thanksgiving. Will you just do the best you can with today?

God knows where you are on this journey. He knows if you struggle with willpower. He knows your track recording of quitting. He knows your worry and overwhelm. He knows your desire to go back to where it was easier. He wants to give you exactly what you will need today, and he will, if you’ll stop worrying about tomorrow and just accept what he has for you today. The strength, the willpower, the provision, the step for today is right here. Let’s not run back to captivity just because the land in between where you were and where you’re going is too hard. Don’t you go back to where you were, keep moving forward on this journey and watch God show up, TODAY.

Tomorrow’s supply comes tomorrow, not today. But today’s supply is here for you now.

By Lonnie|November 20th, 2018|Categories: Devotionals, Podcast|Comments Off on 212 God’s Got You