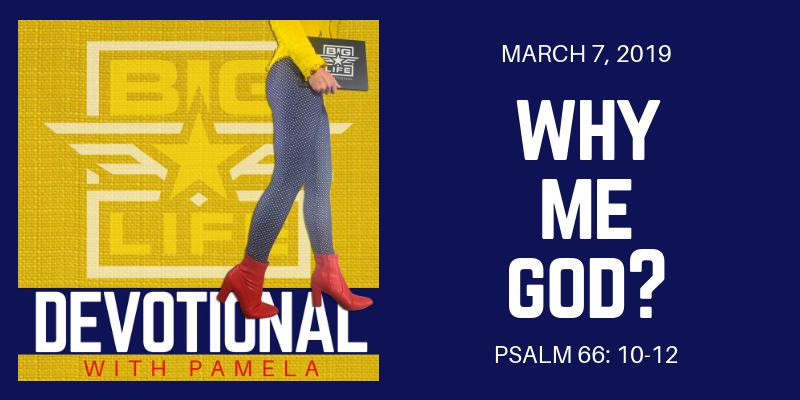 Have you ever said it? Why me God? I’m not especially proud to admit I have. I’ve struggled to understand the meaning behind some hardships. I’ve searched for the purpose and came up empty handed. Why the ups and downs of life? Why the build ups followed by the let downs? What’s the point of what we’re going through?

The lyrics from a song I often sing say “every mountain, every valley, through each heartache you will see – every moment brings you closer to who you were meant to be.”

Yes, this is the journey we are each on. You’re getting closer to who you were meant to be. The mountain you’re now climbing, and the valley you just came out of has simply brought you closer. Closer to the true version of you. The you who is free of the trappings of this world.

The you who isn’t consumed with what others think. This is why there’s been gossip about you. Not because you’re under attack, but because you have a God who supremely knows your concern with the talk of others will only hold you back. So he takes you through that fire to refine you and prove you can rise above their criticism.

I’ve worked with many women over the years who are literally paralyzed by the opinion of others. What if someone looks at you, raises an eyebrow, questions you, or talks about you? I mean seriously woman, you’re missing out on so much of life if you’re trying to avoid being noticed! When I see this is a hindering problem for someone I give them the “Starbucks Challenge”. The challenge is quite simple. Walk into a busy Starbucks and lay down on your back right in the middle of the store. Lay there for 60 seconds. Feel the stares of strangers. Hear their whispers. Know you’re being judged. Know with absolute certainty you look foolish. Then after your 60 seconds, get up and walk away.

You don’t need to explain yourself. You owe no one an explanation. You do you. And here’s what you will learn … you survived! The world didn’t stop turning just because they talked about you. You went unharmed by their judgment.

Maybe you’re not bold enough to willing endure this type of public display of judgment … and that’s okay because God can orchestrate challenges of his own to strip you of your concern over the thoughts and opinions of others. Remember, that’s why you’ve gone through what you’ve gone through. To prove you’re more. To bring you closer to who you were meant to be.

See, this is why you have failed on your journey. Not because you’re a failure, but because you needed to see you’re more than any success you could bring you. God knew about your failure way before you did, and he let it happen. He let you run that show and come to the end of yourself. Not because he had given up on you, but because he’s willing to go through anything with you to bring you back to who you were created to be.

Everything you’ve gone through is part of the training. Nothing has been wasted. It’s all part of the unveiling process of you – the true you – the you below all the layers and coverups – beyond the talk and the show – the you your creator imagined from the very beginning.

Refining isn’t a pretty process. Refining is melting down. Ever had a melt down? Yes, that’s the image of refining!

Psalm 66: 10-12 says “For you, God, tested us; you refined us like silver. You brought us into prison and laid burdens on our backs. You let people ride over our heads; we went through fire and water, but you brought us to a place of abundance.”

You are being brought into a place of abundance. God has a vision for your life, good plans for you personally, and training for you to first go through to prepare you properly. Burdens, hardships, fire … then abundance. There’s a divine order there. Be willing to endure the journey for the destination. God is taking you somewhere! And you can trust it is a place of abundance.

I remember when my kids were little and I would be disciplining them, they would look at me with tears running down their cheeks and say “why do you hate me?” Quite dramatic! I didn’t hate them. It was my job as their mother to guide them in the way they should go, and sometimes correction was needed. Discipline was necessary to keep them from settling for a path of life that would lead them to destruction. A path that would lead them to far less than they were capable of being and doing. My discipline came from a place of love. And a place of faith, knowing they had the ability to do better.

Sometimes we have to be pushed to do better, don’t we?

So today, you can be assured what you are facing isn’t some random craziness and you’re the unlucky recipient. Life isn’t out to get you. And God isn’t against you. It’s normal to feel that way. But don’t stay there. Don’t get stuck in that questioning of “why me”?

Here’s God’s answer for you – because you were created for more. You are capable of more. And you are worthy of more. That’s why he won’t leave you alone. That’s the purpose of the mountain and the valley. You are being refined to step into your destiny of MORE.

By Lonnie|March 7th, 2019|Categories: Devotionals, Podcast|Comments Off on 289 Why Me God