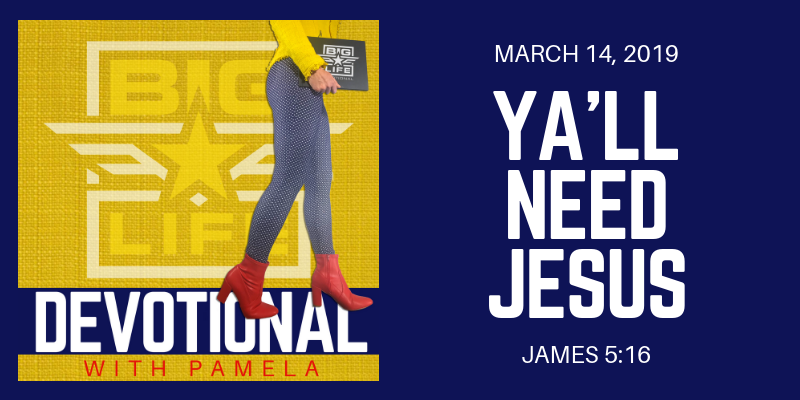 I bet you’re generally a good person trying to do good things. I bet on most days you’re a net positive in this negative world. But we all struggle in one area of another. There’s a little piece of us that’s kinda crappy. A piece of us that’s simply not living up to our potential. Are we living as “less than” versions of who we were created to be, who we could be, who we want to be? I’ve met a whole lot of really good people in my life. People who would give you the shirt right off their own back. People who would bend over backwards for you. And even these good people, when being really raw and honest, would admit that deep down there’s a piece of them that’s rather crappy.

I am far from the perfect Christian. I’m just the one that knows I need Jesus. I mean I NEED him. There’s a crappy part of me within that needs Jesus and nothing else will do.

Today, I’m asking you to pray a bold prayer. This isn’t for the shallow or the weak. This is for those who are truly seeking to become the absolute best version of themselves. This is for those willing to stare down the crappiest part of themselves on the inside and dare to make a shift. If that’s you – if you’re bold and seeking, here’s the prayer:

Convict me of where I’m being a crappy person. Convict me of what needs to change. Give me a strong conviction of where I am wrong on the inside and it’s causing a divide between how I’m living and how I could be living – who you created me to be and who I’m showing up for my life as.

Psalm 32:3 “When I kept silent about my sin, my body wasted away through my groaning all day long.”

If there’s crappy sin within you, holding it in and letting it grow in darkness and shame will cause you to rot from the inside out. Get it out of you.

I have a close friend who is genuinely good. I mean really good. She is kind and generous to everyone and I don’t know a single person who doesn’t love and respect her. About a year ago she shared with me her bold prayer asking God to convict her heart and show her anywhere that needed to be cleaned up. She said the result of that prayer literally made her skin crawl. She became aware of a habit of thinking poorly of others within and the result was gossip, complaining and condemnation with her words.

That’s not who she is, but it was just a little dark area within that had seeped through her thoughts and flowed from her mouth.

I was immediately convicted in the same way. Convicted personally and convicted to share. I began praying the same prayer, LORD CONVICT ME, and the result has been astonishing. Things which were mindless bad habits became highlighted. I was not only convicted, but I was moved to change. Empowered to change.

Are you much like my friend and I who recognize we’re kinda crappy people sometimes. We say things that we shouldn’t say. We share things that simply aren’t ours to share. We take part in conversations we have no business being in the middle of. We’re good people, but something has taken root within our heart that needs to be plucked out. It’s a weed growing and weeds suck the life out of that which is good.

James 1:26 “If you claim to be religious but don’t control your tongue, you are fooling yourself, and your religion is worthless.”

Let’s give the enemy no foothold in our life. He doesn’t get an inch of my heart – not an inch of my mind! When God convicts, he also strengthens to change.

The solution is confession. James 5:16 “Therefore, confess your sins to one another, and pray for one another so that you may be healed. The effective prayer of a righteous man can accomplish much. ” Confess where there’s a crappy part of you. Confess where you’ve been a “less-than” version of yourself. You see as long as you tip toe around it and make excuses for your behavior, it will continue to grow. When God convicts you, confess. Confess to God first. Maybe you even need to confess to someone else. Oh, that’s so difficult, but you talk about a release. What a gift you give yourself. It’s the fastest way to rip that weed from your life. Confess.

Then, receive what God is offering you. What is he offering? Forgiveness. Change. A new spirit. Strength.

You and I simply aren’t the perfect Christians. We’re just the ones who KNOW we need Jesus.