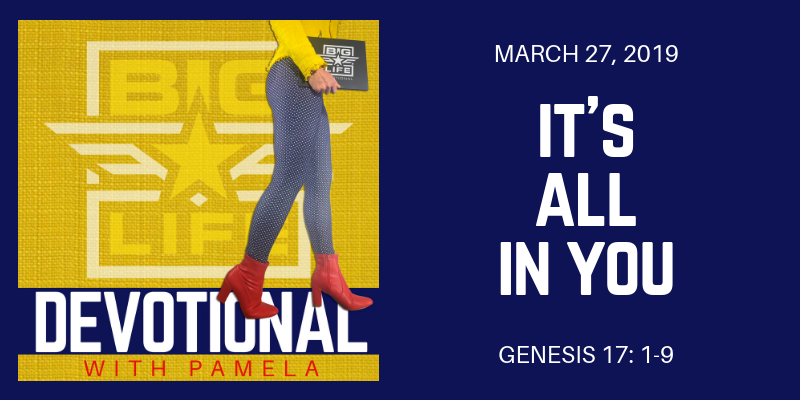 God wants to use you. He wants to radically change and bless your life, not just for you, but for your entire family. And this is why the enemy works so hard to stop you, it’s not just about you. You see if the enemy can just keep you stuck, depressed, overwhelmed, frustrated, and too busy then your whole family is negatively affected.

There’s something IN you that God is going to grow and multiply. What is IN you? That’s what the enemy is fighting you over. It’s not about where you are – it’s about where you’re going and what’s next. Your unborn potential. That’s what is under attack. Things you don’t even know about yet. Plans for your life you’re totally unaware of.

This morning I’ll be sharing a few entries in my journal from an old TD Jakes sermon titled Generations. The story comes from Genesis 17: 1-9

When Abram was ninety-nine years old, God showed up and said to him, “I am The Strong God, live entirely before me, live to the hilt! I’ll make a covenant between us and I’ll give you a huge family.”

Perhaps you remember how the story ends. 99 year old Abraham and his wife Sarah finally have that baby that God had promised.

What have you been waiting on from God? What do you do when God says nothing? When God’s waiting it out and you’re totally OVER waiting? This text shows God speaking to Abraham very clearly. I would like that. There have only been a few times I’ve felt God speak to me that clearly. Wouldn’t it be fantastic if every morning when we woke up we heard clear instructions from God on where we’re supposed to go and what we’re supposed to do.

Maybe you’re in that season of praying and searching and God has been silent. Ahhhhh, yes. There are some truths God cannot introduce to you at earlier times because you have not gone through enough to see what God has for you. It’s when all your bright ideas have failed and your grand plans fall apart that you can hear God speak.

WHY HAS GOD BEEN WAITING? BECAUSE YOU HAVEN’T BEEN READY. He has been taking you through the process to get you ready for the promise.

The process prepares you for the promise. Don’t give up in the process and miss the fulfillment of the promise. You’re just being prepared. That’s what all of this is. Preparation.

So here Abraham was at 99 years old, having made a real mess of things. He and Sarah were so desperate for the baby God wasn’t giving them that he had slept with his wife’s servant and had a baby with her. Well, that’s never a great idea. But when you’re desperate and God isn’t answering, whew we can come up with some cockamamie schemes and stir up some messes.

And now at 99, God finally speaks to Abraham and says NOW I’m going to bless you. Here at the end of your rope where your ideas and strength have run out. Here in the middle of your impossible, I’M GOING TO DO THIS.

Ahhhh, when God is ready to bless you, circumstances mean nothing. My sister, God’s about to show you WHY you went through all you went through. Your later days shall be greater than your former. Your good days are still ahead of you. You haven’t reached your peak yet. There’s still greater potential in you!

It was too late for Abraham and Sarah to have a baby, and that was perfect timing for God. Maybe there’s something in your life that you’re ‘too late’ for. Now you’re on God’s time!

God has been silent, just waiting for you to run out of your own bright ideas and surrender to his plan. Now he shall bring it to pass. Your impossible shall become possible when God moves. Don’t you give up. Don’t you quit searching. There’s something IN you that God is going to use and grow and multiply.

That’s right, there’s something IN you God is going to grow and multiply.

What is IN you? That’s what the enemy is fighting you over. It’s not about where you are – it’s about where you’re going and what’s next. Your unborn potential. That’s what is under attack. Things you don’t even know about yet. Plans for your life you’re totally unaware of.

There were nations inside of Abraham. An old impotent man, but it was IN him. Within him was the lineage of Jesus!

What’s in you? Books, businesses, great grandchildren, ideas and concepts. And this is why God has kept you alive. It’s what is inside of you, the role that only you can play in his plan.

You are significant. You have a role to play. That’s why you’re here.

By Lonnie|March 27th, 2019|Categories: Devotionals, Podcast|Comments Off on 303 It’s All In You