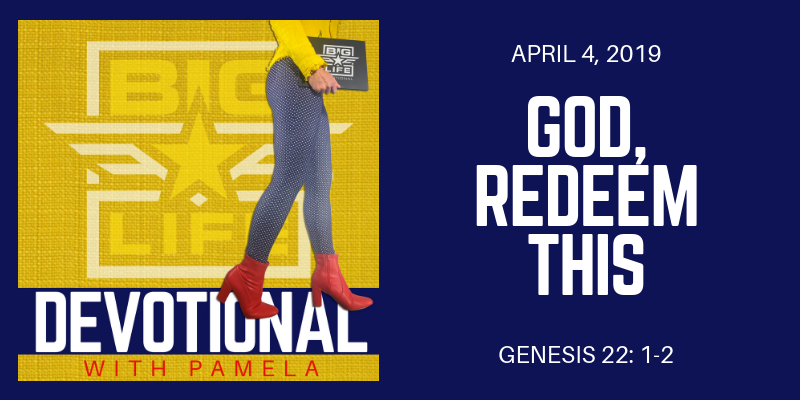 I often share the story of Abraham and Sarah, the couple in their 90’s unable to have children and then God shows up and says “ahhh, no … that’s not the way your story will end. I will give you a child and many nations will come from you.” But do you know the rest of the story? What happened after Abraham and Sarah have their promised child? Life was now good, they have what they want. Their son Issac is growing up and he’s a good boy. He’s everything they ever imagined.

I’ll be honest, I don’t even want to touch that topic with a 10 foot pole.

Understand, that’s exactly what God asked of Abraham and Sarah. This child for whom they had prayed, this miracle which God had given them, their hope and their future was now at risk.

Yes, the son which Abraham had waited 100 years for, his pride and joy, his hope for the future is now being requested to be sacrificed by God. How do you even come to terms with that. What God? You want me to give up the single most precious thing you have given to me?

What a mother Sarah was. What an example for us today. She was willing to sacrifice the best she had for the greater good in full trust that God would redeem it. What if she would have held on too tightly? What if she would have done what every single one of us would want to do – go slap your husband, call him crazy, and grab your child. Then become bitter at God for even asking.

But she didn’t. She watched as they walked away carrying the wood. She trusted God would follow through with his promise to not only give them a son but build nations from them. And if he took it away, he would redeem it.

I wonder if we hold so tightly to that which God has given us that we restrict life from fully flowing through us. I wonder if our grip is so tight on our blessings that life can’t full flow through them either. I wonder if we treasure the gift so much that the gift itself becomes more precious than the giver. I wonder if we really truly trust God with the very things which he gave us first.

What has God given you? Are you willing to let him fully have his way with your life and all that he has given you? Do you believe that God will fully redeem EVERYTHING for you? That’s what our God does. That’s who he is. He is a redeemer. John 3:16 “For God so loved the world that he gave his one and only Son, that whoever believes in him shall not perish but have eternal life.”

As God asked Abraham to sacrifice his son, God knew fully well he himself would sacrifice his own son for anyone who would believe in him. Why? Because he wanted nothing more than to redeem us. And God still redeems today. In every situation of every life who will seek him, he will redeem.

Yes, God sacrificed his only son to redeem us. Then he redeemed his son. He raised him to life again and placed him at his right hand forever in eternity. That’s full circle … that’s redemption. We don’t always get to see full circle redemption, but we must trust it’s in the process.

Redemption is in the process for you. Right now, it’s happening.

Sarah watched her husband walk off to the mountains with her only son and a stack of wood to build that fire for a burnt offering. She trusted in a redeemer. Abraham bound Issac and laid him on top of the wood, trusting God would redeem. That’s when God stepped in. He saw his faithfulness. Abraham passed the test. Then God provided a ram for the offering instead and Abraham called that place on the mountain “The Lord Will Provide”.

By Lonnie|April 4th, 2019|Categories: Devotionals, Podcast|Comments Off on 309 God, Redeem This