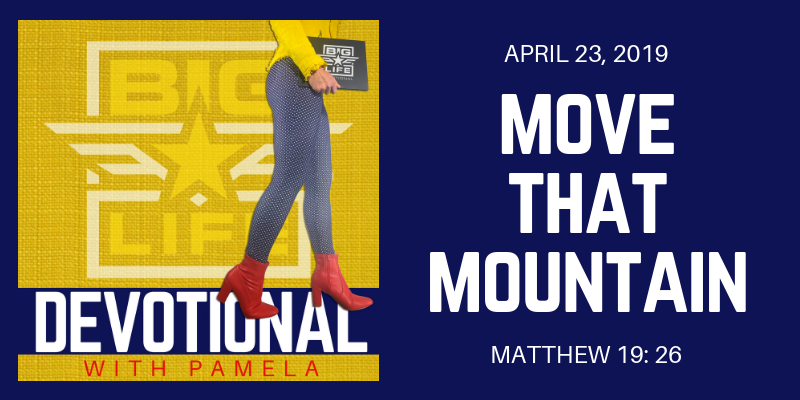 Who remembers the show “Extreme Home Makeover”? At the end of the miraculous makeover of a home, the family would stand on the street with a bus blocking the view of their new home. Then Ty would yell, “move that bus!” In the same way we’re yelling today, “move that mountain!”

In Matthew 19:26, Jesus said “With man this is impossible, but with God all things are possible.”

WITH God. In partnership with God. Working WITH Him, ALL things are possible. However, it will be impossible without Him.

Where is the impossible in your life? The definition of impossible is not able to occur, exist or be done. Where is it not happening? Where have you tried and failed? Where do all doors seem to be closed for you? Have you given up? Are you losing hope that things will ever change?

The very words I share with you today I actually journaled a few years ago. I was facing the impossible, and I had been staring it down for so long I was at the point of giving up. I was walking away from this dream of impacting YOUR life. It was my final declaration of “God, I can’t do this. I’ve tried it all. You’re going to have to show up here.”

I introduced my impossible situation to my unstoppable God. And while it didn’t happen in any way I imagined, it happened. Doors opened and here I am getting to talk to you today, fulfilling my purpose in life. And this is exactly how it happened.

It’s time to introduce your impossible to an unstoppable God. God has good plans for your life and NOTHING and NO ONE can stop those plans … except for you. In his infinite wisdom, our creator has given each of us free will, the ability to choose on our own. And the truth is, we can make a real mess of things. At the root of our bad decisions and wayward ways is fear. Fear we’re not good enough. Fear God’s plans won’t measure up to ours. Fear we’re alone.

So, let me speak to your fear this morning. It’s not too late for you. You haven’t screwed this things up beyond repair. Every misstep you’ve ever taken and every delay you’ve caused can and will be used for good now. I know, you’re thinking, “yeah right … you don’t know how bad I’ve messed up.” Hey, most of us have that one thing we would never want to tell anyone. That shame that eats us up on the inside and reminds us of our guilt.

Jesus says in Matthew 17:20 – If you have faith as small as a mustard seed, you can say to this mountain, ‘Move from here to there,’ and it will move. Nothing will be impossible for you.”

Do you know how tiny a mustard seed is?

When we were battling to keep our daughters, we had to prepare them for being taken from school by strangers and rushed back across the border to Mexico. That’s a terrifying thought to little girls only 10 years old. Then, it was our impossible. And so I went to the pantry and grabbed the jar of mustard seeds. I put a tiny seed in each of my daughter’s hands and told them what Jesus said about faith that tiny with the power to move a mountain. And together we said “we believe … mountain, move.”

Did the Earth shake? Nope. Did the attorneys call at that moment with unbelievable news? Nope. But you better believe mountains moved, we just couldn’t see it.

Impossible things happen when we activate our faith. Don’t allow fear to get in the way of God’s mighty work in your life. Won’t you believe in the unstoppable God? Won’t you trust that the impossible shall be done in His name? Won’t you renew your faith and let it replace your fear?

Bring your impossible to your unstoppable God and tell him you believe. Mountains will be moved.

My mountains have moved and I bet you have seen mountains move in your life too. Think about it. Impossible situations were somehow resolved. Looking back it all seems rather ordinary how it worked out, but in truth it was your partnership with an extraordinary God who just quite simply refused to give up on you! So don’t you give up on Him now. You gather up your faith as tiny as a mustard seed and you believe. Believe your mountain will move. With God it IS possible.

By Lonnie|April 23rd, 2019|Categories: Devotionals, Podcast|Comments Off on 322 Move That Mountain