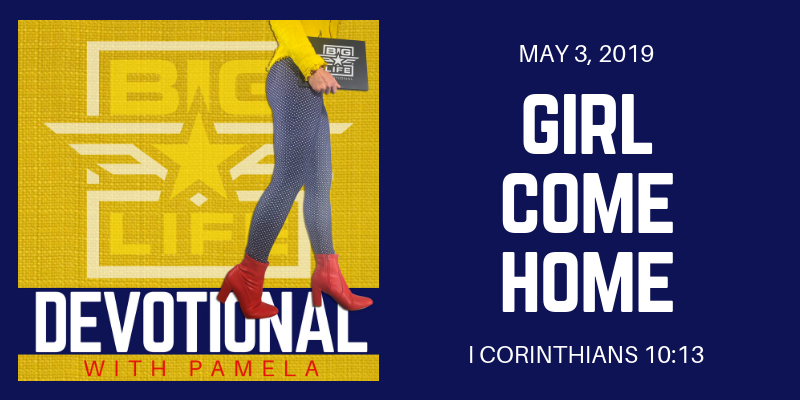 Have you ever witnessed a changed life? A life that was on the wrong path, fully rescued, redeemed, restored and placed securely on the right path? This past weekend I was in the presence of redeemed lives, restored people and rescued destinies. Some still in the process and some now on the right path.

I was part of a team of 65 women serving the Grace and Peace Revive Center in Chicago. There we met Maria. A homeless heroine addict for 24 years. A woman who’s story had been defined by her drug. A woman who grew so tired of living a life she was never created to live, that 93 days ago she sought God for healing and hasn’t been high since. Now just 3 months later, she led our group to the streets where she once lived to rescue others living the same story.

Maria was created for more. She was destined for a life of quality and impact. She was designed with value and worth. She just lost her way. But what matters now is she found it. 24 years is a long time to be on the wrong path in life, but not too long to change it.

God never gave up on Maria, and GOD HAS NEVER GIVEN UP ON YOU. EVER. God doesn’t have a time clock that’s ticking on your opportunity to come back to him. He’s not tallying your missteps and mistakes. There is no score. Today, God is saying TODAY is your opportunity. This day of life has been given to you to come back to who you were created to be. Come back to the life available to you.

For some of us that journey feels so far because we’ve fallen so far from where we could be. We’ve traveled so far down that road that the journey back is overwhelming. We don’t even know who we are anymore. Somewhere along the way, we lost ourselves. May I remind you of the story Jesus shared of the Prodigal son in Luke 15? A father had a son who had chosen money over family, cheap highs over purpose, the right now over the future. This son had failed. He had brought shame to his family. He had lost everything and reached his rock bottom. And at his rock bottom scripture says “he came to himself.” He came to himself. Understand what happened here was this young man realized in his desperation, in his guilt and shame, who he had become, and who he could be. The great distance between the life he was living and the life available to him.

God allows us to hit that rock bottom so we have that moment of coming to our true selves. When all the layers of pride are stripped away and we see through our failures that within there is still someone God greatly treasures and has a plan for. Someone God still loves and wants to use. Someone who has lost no value. Someone of tremendous worth still being fought for. Someone waiting to be welcomed home. Someone you may have lost, but God never did.

The prodigal son started the journey back. Back to himself. Back to his family. Back to who he could be. And the father saw him in the distance and ran to him. He didn’t stand on the porch with his arms folded waiting to lecture him … no he ran to him.

We can see it in the prodigal son and in my friend Maria. Clearly lives that were wasting away, falling so short of their potential, and now they’re fully rescued and redeemed. But what about the life that’s been making hidden bad choices, tip toeing down dark paths no one else even knows about? This is where the enemy plays. This is the danger zone. AND GOD IS CALLING YOU OUT OF THE DANGER ZONE TODAY.

You were created for more. You are capable of more. You are worthy of more. Don’t settle for the cheap highs of life. Don’t dance with the devil. Don’t invite darkness into your family. Come back to the life still available to you as the woman you were created to be. The journey won’t be that long. The struggle isn’t nearly as impossible as you imagine. And guess what, you won’t be miserable in the process. God’s restoration feels darn good. His plan is bigger and better than anything you could ever imagine, so let go of this idea that a full surrender of your life means a surrender of your dreams and happiness. Remember, the true and deep desires of your heart were placed there by God in the first place to guide you to your purpose. God gives you the desires of you heart, not meaning he’s a wishmaster … meaning he’s the author of your desires.

Temptations come in life. Once you’ve accepted the temptation, it grows. It becomes consuming. That drug, that drink, that pill, that place, that person … the temptation is overwhelming. God never promised you wouldn’t be tempted, but here’s what he did promise … he promised you could overcome it.

1 Corinthians 10:13 says “No temptation has overtaken you except what is common to mankind (Meaning you’re not alone – you’re not the only one struggling with this. The enemy wants to make you feel like you’re a world class screw up, but you’re not that special. You stand in a large crowd of failures and mistakes.) It goes on to say GOD IS FAITHFUL; he will not let you be tempted beyond what you can bear. But when you are tempted, he will also provide a way out so that you can endure it.”

There it is – that is your prayer. Pray for the way out when you are tempted. Temptations will come. You will struggle. You will fail. But God is faithful. He is ever watching over you providing a way out. Offering another chance. Never giving up on you. Take it. Take the way out of where you’ve gone wrong. Turn around my friend. Just turn around and start returning. Return home. Return to who you were created to be. It’s not too late. You’re not too far gone. The way out has been provided, but only you can take it.

The devil will come knocking on your door with temptation. He knows your weakness and he knows the buttons to push. It’s as if you have an “Easy Button” on your forehead and he’s just slamming it constantly. The easy trip up. The easy road block. The easy guilt trip. The easy detour. The easy habit. The easy endless loop of shame. The easy reminder of what happened. But James 4:7 says “Submit yourselves then to God. Resist the devil and he will flee from you.” Submit to God, resist the devil. It’s a literal turn. God is calling you down the narrow path that leads to life. The enemy is luring you down the wide path that leads to destruction. They are opposite directions. Literally turn yourself towards God and resist the devil. If you’re not facing the devil, entertaining his nasty little ways, he can’t be slamming the easy button on your forehead. Turn around girl. Head home.

And as you come back to yourself, back to who you were created to be, back to the life still available to you, here’s what will happen … YOU WILL BE RESTORED. That is your promise. All that has been lost will be returned. All that you have suffered will be redeemed. You will not stay down, you will be raised up. This will not be an impossible journey, all things are possible with God. He has made it possible for you to get back on the right path now. Maybe that’s just a little leap for you to get back on track, or maybe that’s a great big 6 year long journey down a path of destruction to start correcting. That’s nothing to God. Nothing. Don’t dismiss yourself because your misstep has been small, God is still calling you back. And don’t eliminate yourself because you’ve been gone so long, God has always been waiting on you.

1 Peter 5:10 says “and the God of all grace, who called you to his eternal glory in Christ, after you have suffered a little while, will himself restore you and make you strong, firm and steadfast.” Honey, you’ve suffered long enough. Come on back. God himself wants to restore you. He has grace with your name on it. Take it. He has strength for today, accept it. He has created a way out of your temptation, run for it.