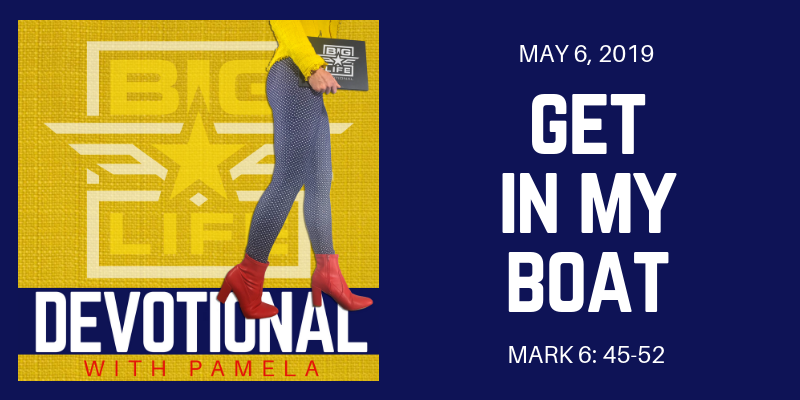 Have you been trying, yet not succeeding? Have you been giving your best effort and not receiving your best results? Are you frustrated with the process? Disappointed in your progress? Disheartened by your position? What do you do now? What you do now can be best guided by the examples of Jesus’ disciples found in Mark chapter 6, verses 45-52.

Jesus was sitting up on a mountainside and he saw them struggling and he began walking out to them. And verse 48 says he was ABOUT TO PASS BY THEM BUT WHEN HE HEARD THEM CRYING OUT he went and got in the boat with them. And when he did, the wind immediately died down.

Now don’t miss this, Jesus was watching their struggle. He had positioned himself high to see them. Jesus is now positioned high with the Father, and he sees you my sister. He sees your struggle. He understands your frustration. He knows you’re growing tired. He has seen it all. His eye is always on you. You have never been in this alone. Never.

As he saw their struggle, he walked out on the water towards them but he was going to pass by them. Did you get that? He saw their struggle because he was watching them. He walked out towards them, but he was going to pass them by. He was going to just walk by them. Now I wonder why? I wonder if Jesus was just checking. He was just positioning himself to be nearby. He was just trying to comfort his disciples thinking if they could just SEE Jesus they would know they were okay.

Right now, Jesus is walking towards you. He has seen your struggle. He has positioned himself near you. His presence is with you. Knowing this should bring us great comfort, but the truth is sometimes we miss it. We miss that Jesus is in the storm with us. We miss that he has his eye ever on us. We even mistake his presence for punishment. We fear condemnation, so we hide.

Why is it we think if Jesus really knew my doubt, if he knew my sin, if he knew my shame, he wouldn’t come near to me. Girl listen to me, he knew every jacked up choice you would ever make before you ever made it, and it was all on his mind when he hung on that cross. He took it all on so you wouldn’t have to pay the penalty for your sin. He took it all on so you wouldn’t have to hide in your shame today. This has already been lifted from you. There’s no condemnation in Christ Jesus. None. You can stop hiding from God now. He knows your personal struggle and he’s heading straight for you, just to be near you.

This is exactly what was happening for the disciples. Jesus was positioning himself to be nearby. He was making his presence known, but they missed it. They look out and see this figure walking on the water and it scared them. They begin crying out in fear … and guess what … it was their cries that brought Jesus to the boat.

If you’re in the middle of a storm. If you’re struggling, WHY ARE YOU CRYING OUT TO JESUS? It is your surrendered cries for help that will bring him to your boat. Jesus, get in my boat. I don’t want to do this on my own. My way hasn’t worked, I need your way.

Honestly, I will often try everything, and my everything will have to fail miserably, before I’m flat on my face crying out to Jesus. How foolish of me. Are you the same way? Hey, let’s get better at this together. Let’s start seeking him earlier. Let’s humbly cry out to him first, remembering our cries bring him directly to our boat.

Yesterday a friend shared with me a lesson on worry. She said worry needs to be an alarm to pray. The moment you feel that worry and you start doing your “worry thang”, get to praying. What is your “worry thang”? Is it playing out worst case scenarios in your head? Catch yourself quickly and start praying. Is it pacing the floor, hiding in the pantry with the cheese puffs and ding dongs, is it grabbing for the bottle of wine, calling all your girlfriends. STOP. This is an alarm to pray. Girl, hit your knees. Stop everything else and pray.

Cry out to Jesus. He already knows about your struggle. He knows exactly what is happening and he’s positioned himself nearby. He’s already walking towards you, but your surrendered cries will bring him to your boat.

I don’t know about you, but I need Jesus IN MY BOAT. I need him calming my storms and charting my direction. Don’t you? How do we get him in the boat? CRY OUT TO HIM.

Oh come on, you’ve tried everything else haven’t you? You’ve tried worrying. You’ve tried fixing. You’ve tried ignoring. You’ve tried it all … but have you tried a fully surrendered cry to Jesus? Maybe it’s been a while. Maybe you’ve forgotten exactly what he can do and you’ve gotten all wrapped up in your own ways and your own power that you forgot about Jesus’ mighty ability to do miraculous works in your life.

Once the disciples cried out to Jesus, he responded. He climbed in the boat with them and the winds died down. Then it says in Mark 6: 51-52 “They were completely amazed, for they had not understood about the loaves; their hearts were hardened.”

What is this about the loaves? What had the disciples missed that should have helped them in the storm? What had they just experienced before the boat? There was a lesson they missed.

What had just happened before was the miraculous feeding of the crowd of 5,000. This is where Jesus took the lunch of a small boy, 5 loaves of bread and 2 small fish, and had the disciples feed the crowd. Oh yes, where Jesus took what wasn’t nearly enough and made it MORE than enough. Everyone there ate until they were full. Then Jesus told the disciples to gather the leftovers and there were 12 baskets full of food. What a miracle. Why do you think Jesus wanted the disciples to gather the leftovers? Were the leftovers really needed? Could it have been so the disciples would see for themselves exactly what Jesus had just done? Could it be so they themselves could touch the miracle and count it up? 12 baskets full of leftovers when it all began with not nearly enough. Oh yes, there was the lesson. But they had missed the lesson. They were just busy doing what they were told to do. They were just going through the motions, missing the meaning.

Have you been going through the motions, missing the meaning of it all? Missing the miracle Jesus has done?

When scripture is saying they didn’t understand the loaves and their hearts were hardened, what it means is they MISSED WHAT THE 12 BASKETS FULL OF FOOD IN THEIR BOAT REPRESENTED.

Yes, right there in their boat with them was a reminder of what Jesus had done before them. They should have known Jesus would protect them in a storm where paddling that was getting them no where. The proof was right in the boat with them.

Remember what he has done in your life, and let it give you blessed assurance that he will do it again! Cry out to him with boldness knowing his eye is on you, he has seen your struggle, he is positioned nearby, and your cries will bring him to your boat.

By Lonnie|May 6th, 2019|Categories: Devotionals, Podcast|Comments Off on 331 Get In My Boat