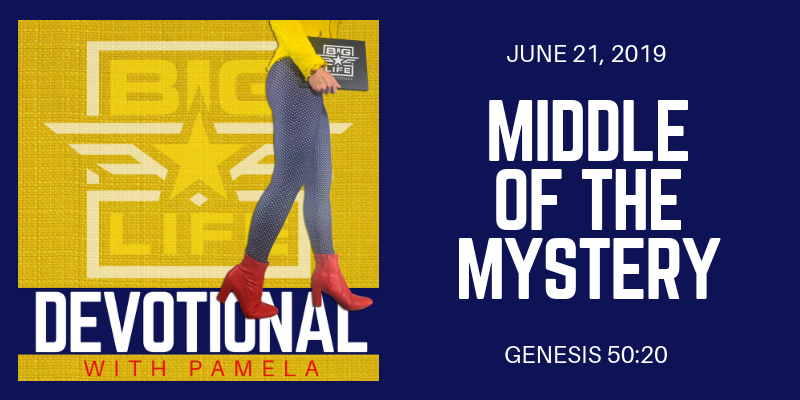 Since yesterday’s episode, who has been singing Bethel Music’s “Raise a Hallelujah”? I literally had that song on repeat and it was my continual prayer throughout the day. In the face of my enemies, in the midst of my unbelief, I used my praise as a weapon and heaven came to fight for me. If you missed episode #364, I encourage you to go back and listen to it now. Today is Part 2.

The story behind the song is one of heartache and uncertainty. Jackson, a 2 year old little boy, was sick. He had been battling for his life, and on one particular night they didn’t believe he would make it through. This song came from the cries of believers that night. They felt the overwhelm of fear and the darkness of the enemy and they sang. They raised a hallelujah as heaven came to fight. Jackson survived the night and he recovered fully.

Have you ever wondered why God would allow something like this in the first place? Why the suffering? Why the sickness? God saw it all and he allowed it. This happens to be one of those times where we can see the eternal impact of a seemingly unfair situation. This song is the result of a little boy fighting for his life, and it is impacting the lives of millions. Is God taking what the enemy intended for harm and using it as good … yes, you better believe he is. And this is what he wants to do in your life!

Remember the story of Joseph? He was the favored son of his father, the one who received the fancy coat of many colors from his Daddy and his brothers all got jealous. And what do jealous brothers do … they throw him in a pit and leave him for dead. (And you thought your kids fought savage!) Joseph’s brothers intended harm. The enemy knew Joseph’s potential and he tried to destroy him. After the brothers left him Joseph for dead, his life got even worse. For 22 years he was mistreated as a slave, then a prisoner, always working his way back up. Eventually he was put in a position to save the lives of the very men who first tried to kill him, his long lost brothers. He looked at his brothers and said in Genesis 50:20 “You intended to harm me, but God intended it for good to accomplish what is now being done, the saving of many lives.”

God used the struggles – he used the hardship – he used the pain – he used the unfair treatment – he used it all for eternal good. This wasn’t just brothers playing unfair, this was about the saving of many lives. And so it is with Jackson, the sick little boy for whom this song was written. It wasn’t just about Jackson being well again, it was about the saving of many lives. The eternal impact of his story. The hallelujahs that were sent to heaven just yesterday as we sang in the presence of the enemy, louder than the unbelief.

Could the very thing the enemy has used to attack you, be turned into your weapon to defeat him? Could God have allowed this because of the eternal impact on countless lives you’re not even aware of? Could the way you fight this battle be a guide for others in their battles? Are we all connected and impacting each other? Yes. I believe this is exactly how our God works. He uses it all – the worst of the worst, the hardest of the hard and he uses it for good. Something real good. Something you and I cannot even imagine. Our simple minds cannot contain how God is using every struggle and hardship for something good.

Listen to the next set of lyrics in the song:

If you’ve been walking in fear – if you’ve been laying awake at night playing out all the possible scenarios – if your mind is filled with a continual replay of the hurt and the pain, this is how you break the hold of fear in your life … YOU RAISE A HALLELUJAH!

With everything inside of you, raise that hallelujah. Your hallelujah is a praise to the Almighty, a cry of your spirit worshiping, trusting, surrendering, calling out to your Creator. And as you do, the darkness will flee.

Are you surrounded by the darkness of uncertainty? You don’t know how in the world all of this is going to work out. Honestly it looks impossible. The future is dark and that flicker of hope is growing dim. Been there. I understand. That darkness is heavy and overwhelming isn’t it? It’s consuming and exhausting. How do you fight darkness? There’s only one way … with light.

In John 8: 12 Jesus says “I am the light of the world. Whoever follows me will not walk in darkness, but will have the light of life.”

You fight this darkness with light. Jesus is the light of the world. He will show you the way. He will direct you. And where there is no way, HE WILL MAKE THE WAY, DARN IT! Turn the light on this darkness in your life by raising your hallelujah. With the light of Jesus, the darkness must flee. Walking in faith doesn’t have to look like stumbling in the dark. You were never meant to stumble your way through life, beating on doors that will never open, getting stuck in the corners. You have a mighty God on your side and an angel army coming to fight for you, raise your hallelujah in confidence knowing the darkness is about to flee! The battle has already been won my sister, the victory is yours. Receive your light. Walk out of this corner, walk through the doors, live your life in freedom and wholeness.

Fear, you’ve lost your hold on me!

The enemy has been whispering doubts and fears … have you been listening? Drown him out with your praise to the almighty. You simply can’t hear the lies of the enemy when you’re raising your hallelujah! I may have to walk through the valley of the shadows of death, but I don’t have to be afraid! My God is with me. He will comfort me and protect me. He will comfort and protect you. He will guide you. He will shine his light on all the dark places in your life and renew your hope. He will lift your spirit as you raise your hallelujah.

Are you waiting for it all to work out – then you will praise God? Are you planning to really give him glory on the other side of this? Hey, he wants your praise right now! He doesn’t just want space once it all works out, he wants space here in the middle of it. Let him in. There’s a song only your heart can sing. In the middle of this storm, let your praises roar. Rise up from these ashes, death has been defeated.

Let him hear your hallelujah in the middle of your mystery. Yes, right here today where you don’t know how in the world this is going to be okay, where it still hurts because it’s raw and real and quite honestly sucks. This is where God moves. This is where his angel armies come fight for you. Your praise and worship are literally like flipping the switch and turning on a light.

A light in your darkness.
Jesus shows up.
The enemy flees.
Hallelujah.

By Lonnie|June 21st, 2019|Categories: Devotionals, Podcast|Comments Off on 365 Middle of the Mystery