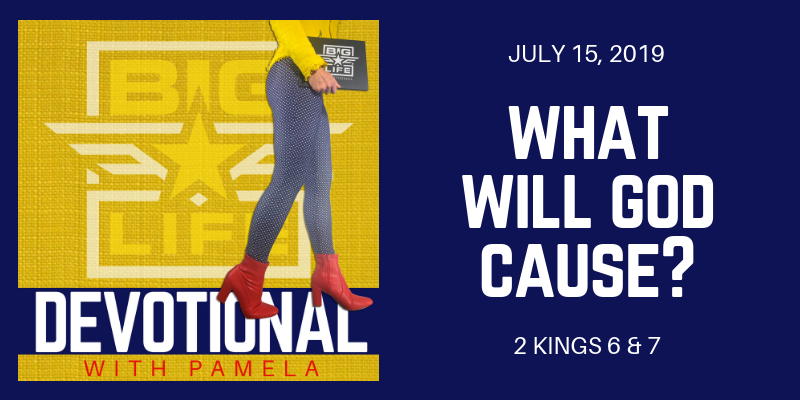 What if doors that have always been locked for you are about to open? What if something that has never worked for you in the past is now preparing to work? What if God has prepared a breakthrough and success for you, but you have to be willing to try again? Would you dare to face down possible failure today for potential success tomorrow?

Today we’ll look at a story hidden within the bible you’ve likely never heard about. A story of 4 men without names who God used to save an entire city. A story of what God caused in the face of the impossible. This story is found in 2 Kings chapters 6 & 7.

Israel was under attack by the Arameans. The people of Israel were starving, having been cornered in their own city with no food or water, even resorting to cannibalism for survival. Outside of the city were 4 men who had it even worse. These men were not even allowed within the city because they were infected with leprosy. They were treated as outcasts and left to face the enemy outside of the city gates.

And here in the worst place of their lives, in a place where everything had gone wrong, a place where all hope seemed to be gone, is where God used them, blessed them, and worked through them. Someone listening today is in a place similar to this. Your situation seems to be hopeless. You never imagined life would come to this for you. All you desire in life seems to be out of reach and you have been stuck, locked out, maybe even abandoned by those you thought would help you. But you have no idea what God is doing right now in this darkness. You have no idea how God is working!

These 4 men were faced with death if they went to the enemies camp to beg for food, but also knew they faced death if they stayed where they were and starved. So they boldly decided to march right into the camp of the enemies. They went. They went afraid. They went desperate.

These 4 lepers were desperate and at their breaking point. They faced what they assumed was certain death and entered the enemies camp to beg for food, and there they found empty tents with piles of food. More than they could eat. Enough food for their entire starving city was right there. And the enemy … the enemy was gone. All their food, their clothes, their tents and their treasures were left behind.

Now what had happened here? Understand this and apply it to your life today, in those dark places of despair, those places covered in the shadows of your enemies, those valleys of hardship and disappointment.

Let’s read and see what had happened. 2 Kings chapter 7, beginning in verse 5: “At dusk (the 4 lepers) got up and went to the camp of (their enemies). When they reached the edge of the camp, no one was there, for the Lord had caused (their enemies) to hear the sound of chariots and horses and a great army … so they got up and fled in the dusk and abandoned their tents and their horses and donkeys. They left the camp as it was and ran for their lives.”

Notice these words THE LORD HAD CAUSED. The Lord had caused their enemies to hear the sounds of an attacking army that wasn’t even there. They were so scared they left everything behind and ran in the middle of the night with no return.

For the 4 lepers searching for food, they didn’t even face a battle. When they got up from their dark despair and tried what they could try, they found God had caused unbelievable things to already happen before them, they just had to walk into it. Provision was there. Protection had been provided. They could have just laid at the city gates and died, just like you could curl up in a ball and hope it all goes away today. You could sulk in despair. You could replay all that hasn’t worked for you in the past and throw yourself an epic pity party. You could pick at your scabs and cry in the mirror.

God had made a way for these 4 nameless men, and he used them to save their entire city. When they found the abandoned camp of their enemies with an abundance of food and supplies, they went back to the city gates and shared the good news. Entire families were saved because these men, in their dark desperation, simply got up and did what they could do, even when failure seemed like the only probable outcome.

What does God want to do for you and through you? What provision has he lined up if only you will get up and go? What will he cause to happen on your behalf? Well, you’ll never know if you don’t go.

My God is a mountain mover. My God is a chain breaker. My God is a redeemer and a restorer. He makes things happen that couldn’t and shouldn’t happen otherwise. He is a provider and a protector. His ways are not our ways, his thoughts are above our thoughts, and he’s on a mission to blow our minds with what he will cause to happen on our behalf.

By Lonnie|July 15th, 2019|Categories: Devotionals, Podcast|Comments Off on 381 What Will God Cause