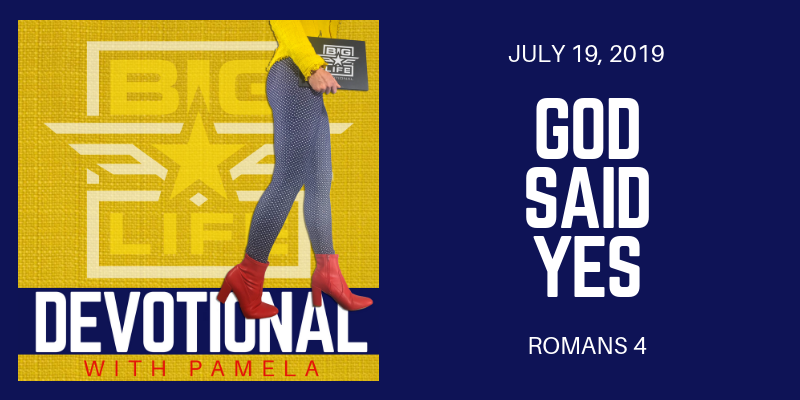 God has made promises over your life. He always keeps his promises, that’s never in question. So, why are you still waiting? Why the frustrating delay in your life? Here’s a thought … maybe God has already said yes, he’s already made a way, it’s already completely possible, HE’S JUST WAITING ON YOU.

Remember the story of Abraham and Sarah? The old couple with no babies. God had promised them a baby. In fact he did more than that, he promised Abraham that he and his children would possess the earth. But how was that possible if Abraham and Sarah couldn’t have children? It almost seemed a cruel joke “hey Abraham, you can have ALL of this, oh but wait, you can’t have children.” Have you ever felt like that? Like God planted a dream and vision in your heart and then made it impossible for you to have it? You get your hopes up thinking things are going to happen and then they don’t? Oh come on somebody, are you willing to be honest enough with me here to say yes, that’s exactly how I feel. Where you at God because this thing isn’t happening?

“Train up a child in the way he should go: and when he is old, he will not depart from it.” (Proverbs 22:6) – Well, I have one really departing HARD here God, where you at?

“Those who hope in the Lord will renew their strength. They will soar on wings like eagles.” (Isaiah 40:31) – Not soaring here God, not at all. I’m grounded with no flight, where you at?

“God will meet all your needs according to the riches of his glory in Christ Jesus.” (Philippians 4:19) – Alrighty, so I need a job. I need mo money like stat. I need answers God, where you at?

“For I know the plans I have for you, declares the Lord, plans to give you hope and a future.” (Jeremiah 29:11) – Uhhh yeah, about that – the future’s not looking so bright here in this crapfest Lord, where you at?

This must have been how Abraham felt too. Lord you promised you would give us a family but it ain’t happening, and let’s be honest it’s not going to! But look what God did for Abraham and remember you have the same God with the same power today!

Romans chapter 4 is Paul’s account of this famous promise God had given to Abraham. I’ll be skipping throughout that chapter reading from the Message translation. Starting in verse 13, “the promise was not given because of something Abraham did or would do. It was based on God’s decision to put everything together for him, which Abraham then entered when he believed.”

Oh come on somebody, I know God is speaking to you right now. It will happen when you dare to trust God to do what only he can do. Even when you’re hopeless, you have to believe anyway. What has God promised you? You have a whole book of promises straight from YOUR GOD to YOU. When is the last time you read up on those promises? The way has already been made, God’s just waiting on you to believe.

Verse 20 and 21 of chapter 4 says “Abraham didn’t tiptoe around God’s promise asking cautiously skeptical questions. He plunged into the promise and came up strong, ready for God, sure that God would make good on what he had said.” Oh, who’s been tiptoeing around with God acting like maybe he doesn’t hear you, maybe he doesn’t care, or maybe he won’t answer … stop it! Plunge into God’s promise. Dive in – head first – all in. This is exactly what you and I need to do today. Dive into God’s promise over our life and then we will come up strong and ready, knowing God will do exactly what he said he would do.