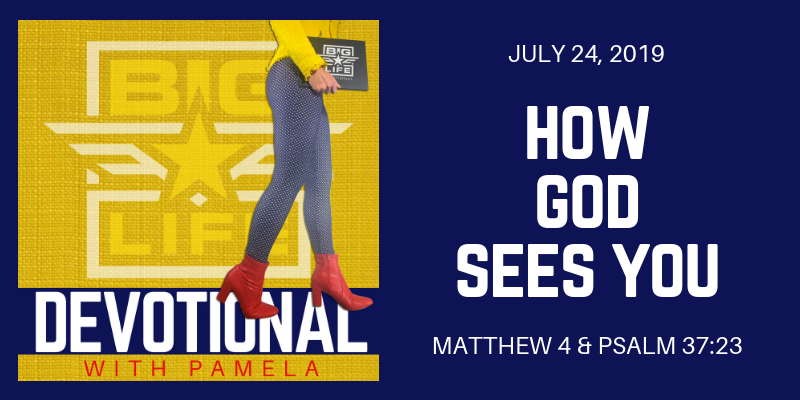 When God looks at you, what does he see? He sees who he created you to be. He sees your potential. He sees his beautiful creation on a journey to becoming all he imagined … and girl he’s moving heaven and hell to help you get there! Today I’m here to help you lean into what God sees in you. To help you start believing in the potential he has placed inside of you. To step into the destiny that has your name on it.

God is calling you to what you’re going to be all while you’re trying to fit in with what you used to be. Repeat after me, I’m not who I once was! Now, you can drop those old ways, old thoughts, old habits, and confidently step into the life available to you.

In yesterday’s devotional, episode 387 titled “I’m Ready Now”, we heard about two brothers who were fishermen, Peter and Andrew. When Jesus walked by them and said, follow me, they dropped their nets and followed him. We learned that it is the following of Jesus, the pursuit of Jesus that changes us. We do the following and Jesus does the changing.

Peter and Andrew had to first do one thing before they followed Jesus … they had to drop their nets. Understand the value in their nets. This was their one tool for income and survival. This was all they had. They had likely spent their entire lives caring for and mending their nets. Leaving it behind to follow Jesus was a tremendous step of faith, but imagine if they would have tried to drag it with them. To step into the life Jesus was calling them to, they had to drop it.

Isn’t this the real life journey of every single one of us? We make progress, we taste success, then we relapse. And isn’t it harder the second time around because we now know what we can have, we’ve tasted it, we even lived it for a time and going back to who we were and how we were is painful. Have you ever lost weight, then gained it back? How many times will you lose and gain the same darn 20 pounds? Have you ever ran a race, then stopped running? Have you ever slayed one of our challenges to simplify your life, then gone out and bought a bunch of stuff you don’t need? Or have you ever taken on the zip-it challenge with us and successfully restrained your tongue with no nagging, nit-picking or complaining for a period of time, then boom … you’re right back to running off at the mouth like a mad woman, screaming at the kids, nagging at your husband, and complaining to your girlfriends?

We sure have a way of screwing this up don’t we? We make progress with one step forward, then it’s two steps back. Picking up again those habits and choices we once put down, taking us back to who we once were instead of moving forward to who we’re being called to be.

We’ve all relapsed before. Each of us have gone back and picked up something that God told us to drop. But God isn’t giving up on you. Even when you’ve given up on yourself, God isn’t. And you know why? He sees something in you. He knows your potential. Do you know how he knows your potential? Because he put it there! He filled you with potential to successfully live a big, beautiful life and he just keeps coming back to you time and time again with more opportunities to drop whatever you’re holding on to and follow him.

When I began my journey, I had no idea what God saw in me. I never went to college. I’m just a simple country girl, the daughter of a carpenter and factory worker. I took a single public speaking class as a Sophomore in high school, and I fully admit the only reason for taking that class was to sit by my boyfriend. I would have been happy staying in that little country town working in the only factory there. But God had different plans and I had nets I had to drop. I get glimpses of what God has available for me and it literally scares me. I can run or I can lean. I choose to lean.

God is calling you to what you’re going to be all while you’re trying to fit in with what you used to be.

Psalm 37:23 says “The Lord makes firm the steps of the one who delights in him.”

By Lonnie|July 24th, 2019|Categories: Devotionals, Podcast|Comments Off on 388 How God Sees You