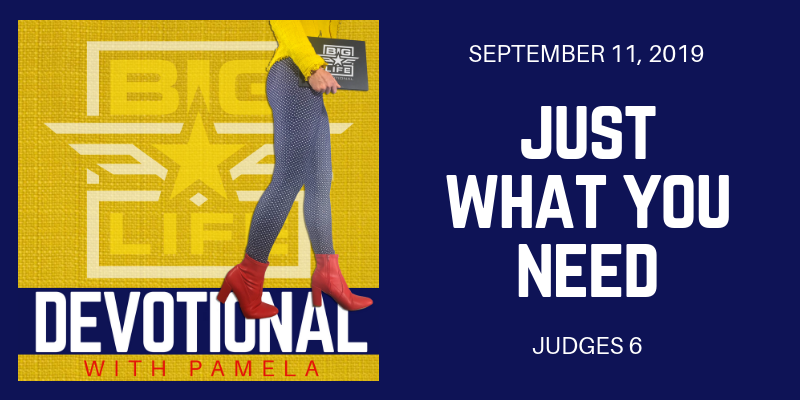 Today’s devotional is titled “Just What You Need” and you are about to get some guidance from God! Oh yes, it may be just what you need!

Now this must have been confusing to Gideon because it sure didn’t feel like God had been with him. I mean everything had been going wrong. Everything. And why would God call him a hero? He had done nothing. He felt so helpless threshing his wheat, hiding just trying to find a way to eat. But yes, God called him a hero. A mighty hero.

God had a plan for Gideon and who he would need to become was something much more than he currently was. God has a plan for you and you may need to become much more than you currently are. You may need to rise up to the potential God has placed in you, the God given potential buried beneath years of playing little and settling for less. God sees you for who you CAN be and he calls you out to step into your potential. The real you, the authentic, best version of you is in there and God is calling her out! Are you ready to become more than your currently are? Are you ready to step up to the next level of living?

I believe God is saying the same thing to you and I today. I’m not going to explain why all this has happened, that’s why it’s called faith. Will you move on before you understand why, or will you beat yourself silly and stay stuck right there for the next 10 years trying to figure out why? That’s your choice, but understand this, God is calling you on. GO WITH THE STRENGTH YOU HAVE, I’M SENDING YOU. You must trust me and go do what you can about the situation with what you have. What you have may not be a whole lot, but that’s exactly what God wants to use to change your situation. You must go and do what you can with what you have.

I have an amazing son who is 20 years old. He is everything I hoped he would be as a young man. He’s a soldier in the US Army currently stationed in South Korea and while I haven’t seen him in 9 months, he calls his mama most every day just to tell me he loves me. Now, let me tell you a little story … from the time boy was 12 to 13 years old, I came to understand why some animals eat their young. He was an unbearable little jerk. I didn’t like anything about it and the only reason I could love him was simply because he breathed. One day I was praying about this little jerk, begging God to help me guide him out of his attitude and into his potential. And God responded very clearly to me “in the morning I want you to host a live devotional call.”

What? Yo God, did you not hear me. I’m pouring my heart out over this boy of mine and you’re telling me to start hosting a devotional? What I didn’t know then was God was taking care of my boy. He was letting him fail so he could build him up for future success. He was molding and shaping him. Mama needed to get started with her thing. That little devotional call I led the next morning is now the number 1 women’s devotional podcast in the world! I had no idea what I was doing, but I decided I would just show up and do what I could with what I had.

By Lonnie|September 11th, 2019|Categories: Devotionals, Podcast|Comments Off on 422 Just What You Need