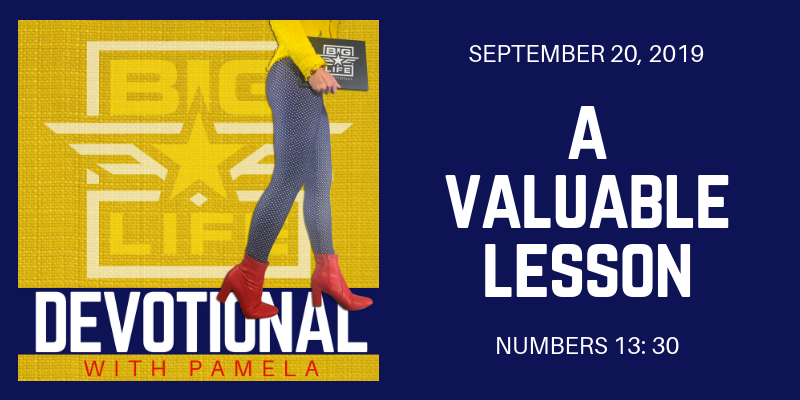 I’ve always told my kids, everything is a lesson. A lesson on either what to do or what not to do. We all like the examples of what to do, show me what works. But I believe even more powerful are the lessons on what NOT to do. Let me know in advance what doesn’t work, then I’ll make sure that’s not what I’m doing. Today we’ll dig into a story in the bible and learn from a few mistakes that will save us a year (or 40) of walking in circles with no progress. This is the real life stuff of what causes us to get stuck, what causes us to settle for less, what causes us to miss out … and how can we NOT do that?!!!!

This is a lesson on what NOT to do.

God has a plan for each of us. A life he envisioned from before he ever formed us. Then he created us equipped with everything we would need to step into the life he made us for. His plan is always complete. His way is always good. And the path is always ours to choose … or not, and there’s the problem. While we are guaranteed that God has a good plan for our lives, we are not guaranteed that we will follow it. We may be wasting time on a path God simply can’t bless. We may be creating obstacles for ourselves. Our being stuck may be of our own doing.

They had an 11 day journey through the desert to their promised land. 11 days is what it would take if they would trust God and keep moving forward. But they didn’t. Instead of 11 days in the desert, they got stuck there for 40 years. For 40 years they wandered around miserable in a place they didn’t want to be, in a place they were never meant to stay. An entire generation died in that desert. How did this happen? How did they turn an 11 day journey into 40 years of wandering? Let’s learn this so we don’t make the same mistake. I don’t want to miss the promised land in my own life. I don’t want to miss God’s plan. I don’t want to wander and get stuck.

What caused this? FEAR. Fear of opposition. Fear of failure. Fear of the unknown. Fear they weren’t good enough. Fear God wouldn’t take care of them.

This is what kept them stuck and caused them to miss out. This is what caused an entire generation to miss what God had available for them. It was FEAR. And the same will happen to you and I. Where is fear causing you to live less than you could be? Where is fear holding you back in a little life when you were created for a BIG Life?

Here’s the lesson on what not do do. The land the Israelites wanted to go to was Cannan. It was only 11 days away, but it was the land of the unknown. Moses being a wise man sent out 12 leaders ahead of the crowd as spies to see what they were up against. How hard would it be for them to get to Cannan and what were the people like? For 40 days the 12 men stalked out the city. They tasted the grapes and the pomegranates, indeed this place was way better than the dessert, but there were obstacles. They would have to fight to get what they wanted. It wouldn’t be easy.

In fear of the defeat that COULD happen, the Israelites chose not to go and take the land God had promised them – the land available to them, only 11 days away from them. Instead they wandered in the desert for 40 more years. It was a FAILURE to remember what God had already done for them and a FEAR of the future that left them stuck. They sat in a desert and complained about how bad it was while the entire time they had the power to walk right out of it. Failure to remember and fear of the future. Do you remember what God has already done for you? Do you trust he has already made a way for your future?

I wonder if there’s anyone listening this morning that’s sitting in a bad place and too afraid to do anything about it? Hasn’t God proven himself to you in the past? Hasn’t he provided for you before? Hey, I’m pretty sure by you listening this morning is proof you have a 100% track record of making it through! You haven’t died a single time. God has always brought you out and kept you alive. So why would you sit in a miserable place, settling for less than God’s best, just watching your life pass you by? Why would you do that? Oh yeah, FEAR.

Not your husband? Not your boss? Not your BFF? Everyone is doubting you? Everyone seems to be against you? Hey, let me whisper a little truth in your ear this morning … they’re not against you. The people you love hold you back and tell you you can’t because they’re trying to protect you. They’re either afraid you will fail and they don’t want to see that … or they’re afraid you will succeed and with all your new found success you might want them to change, or even worse, you might not need them. They’re just afraid and they project their fear on you.

But much more importantly than my voice, you need to hear the second voice that tells you to move forward and conquer this. That’s God.
Joshua 1:9 Be strong and courageous. Do not be frightened, and do not be dismayed, for the Lord your God is with you wherever you go.”

Deuteronomy 31:6 Do not fear … for it is the Lord your God who goes with you. He will not leave you or forsake you.

By Lonnie|September 20th, 2019|Categories: Devotionals, Podcast|Comments Off on 429 A Valuable Lesson