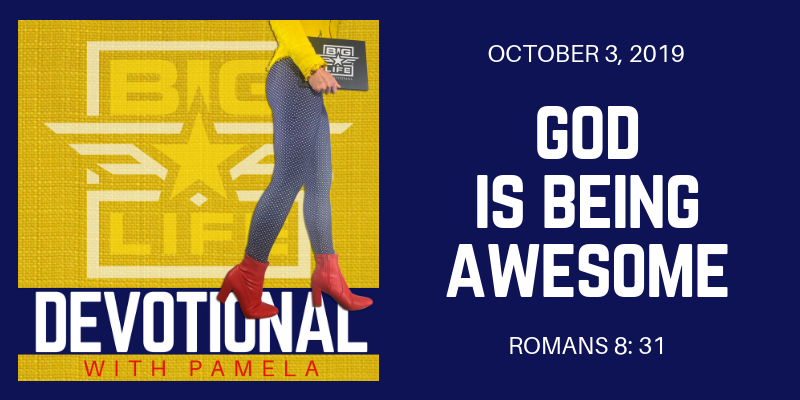 Oh yes, your God is being awesome today. He has straight up awesome plans and works in mind for this day! You need to know that. You also should know the Devil is being a butthole today. Uhhhuhh, that nasty old devil woke up in a bad mood on this Thursday and he’s trying his darnedest to wreck havoc in your life. You’ll likely see his buttholey works around you. You’ll see his attempts to twist and manipulate. You’ll see his offering of a bad mood, a bad attitude and a bad day. But if anyone is going to have a bad day, let it be him!

He may have ruined perfectly good days for you in the past, but it doesn’t have to go down that way today. Not this time. You’ve been properly warned and you can be on alert of his buttholey ways. Remember last week in episode 434 I told you of his crappy plans for you? Oh please tell me you haven’t been falling into his plans. Please tell me you haven’t been believing his lies this week.

Here’s the thing you need to know about this enemy you battle … he’s a wanna be … but he ain’t gonna be. He wants to rule your day. He wants to wreck your plans. He wants to stir up trouble. He wants steal your joy. He wants your focus to be on him. You’ve heard the saying “there’s no such thing as bad publicity”. If they’re talking about you, it’s good, even when they’re talking bad. That’s the plan of the devil. He doesn’t mind if you hate him. He loves it when you talk about how hard your life is and how bad things are. Because here’s the thing, if you’re thinking about him, you’re not thinking about God. If you’re talking about him, you’re not talking about God. You’re focused on his works and he receives the publicity.

The truth is, we give him way too much credit! The enemy is just a butthole. End of story. He’s already been defeated by Jesus Christ on the cross. He is the loser. Don’t focus on the loser. Focus on the winner. The battle is real but spoiler alert, JESUS IS THE WINNER EVERY TIME.

So I will speak of the enemy and his butthole ways no more. You’ve heard the truth about him. You’ve been warned of his crappy plans. Now let’s focus on the winner. You and I are on the winning team. We get to celebrate the victory that has been won on our behalf. We are covered, we are claimed, and we are celebrated. Hold your head high today knowing GREATER IS HE THAT IS IN YOU THAN HE THAT IS IN THE WORLD. (1 John 4:4)

Romans 8:31 says “If God is for you, who can be against you?” Deuteronomy 31:8 says “The LORD himself goes before you and will be with you; he will never leave you nor forsake you. Do not be afraid; do not be discouraged.”

Hang on to that today. God is FOR you, he is WITH you, he has already gone before you and made a way. What was impossible is now possible because God is in the middle of it.

Today, God is being awesome. Yip, plain ol’ awesome is what God is up to today. He is being powerful. He knows your name and he is calling you. He is drawing you in to his great plans and your mighty purpose. He is directing your every step and he is aligning every detail. Let this be your focus today. Search out proof of his truths. See his fingerprints all around you.

Yip, the devil is being a butthole today. We shouldn’t be surprised. That’s his job. Give him no attention. Turn your eyes to the great works God is doing in your life. He is being awesome. Winners don’t sit around talking about losers. Winners talk about winning. And that’s what you are. You’ve been set apart as a winner. You’ve been declared as MORE THAN A CONQUEROR.

By Lonnie|October 3rd, 2019|Categories: Devotionals, Podcast|Comments Off on 438 God is Being Awesome